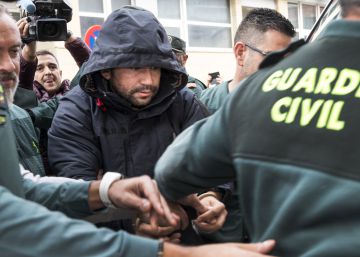 Jorge Ignacio Palma, arrested for the disappearance of the young Marta Calvo, has arrived around 12:30 at noon to Alzira to give a statement to the head of court number two, now on duty as a guard despite the fact that the court is responsible for the previous proceedings of the case number 6 of the locality. He 38 year old Colombian He has entered hiding his face under a hood and surrounded by a strong security device. Next, his lawyer, Óscar Fernández, who has declined to make statements as soon as he has arrived has gone to court. Minutes later, he has advanced the intention of his client to avail himself of his right not to testify, since it is the court of guard and not the one that will subsequently carry the instruction, and therefore, he would have to duplicate his testimony. The judge has decreed provisional imprisonment, communicated and without bail, for the detainee, as the lawyer of Palma has advanced about 2 pm. The case is open for an alleged crime of homicide.

Palma appears at the judicial headquarters before the 72 hours allowed by law for the first police proceedings before being brought to justice. In front of the courts a small group of people has congregated, because he was hiding under the hood of his blue jacket.

At the gates of the courts of Alzira are concentrated media waiting for the suspect to testify and the holder decree the precautionary measures of a case of the most media in recent years in the Valencian Community.

Jorge Ignacio Palma surrendered last Wednesday after 25 days of persecution by the Civil Guard and confessed that he had dismembered Marta Calvo's body, after he died accidentally in his house in Manuel on November 7. They had used a large amount of drugs, always according to their version that the researchers question. The detainee was imprisoned in Italy after being arrested in 2008 with nine kilos of high purity cocaine in Brescia.