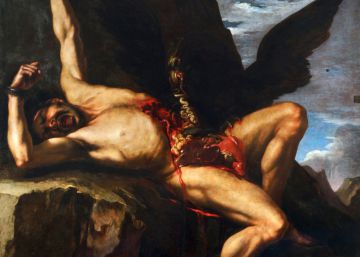 Friedrich Engels left somewhere that tradition plays an important role in human behavior. In addition to the determining influence of the economy, our way of conducting ourselves through life is due, according to Engels, to common customs that already existed long before we were born.

That said, the archetypes of our tradition can be found in classical mythology; in the relationship between heroes and gods who came to explain the origin of the world. The psychiatrist Carl G. Jung dedicated himself to studying the latter, entering the collective unconscious, that is, in our community storage room; site where they reproduce, among many other pathologies, neuroses and dissatisfied desires. For Jung, it is the remote place where the mythological gods left their genetic mark; the same footprint that, according to Engels, "prowls like an elf in our heads." In this way, tradition and its magical component lead us to recognize in the myth of Prometheus the titan of mortals; a border and cunning character who befriended men for disturbing Zeus.

When the father of the gods captured Prometheus for taking the fire to men, he chained his body to a rock and ordered an eagle to eat his liver. But Prometheus's liver regenerated every night. With this, the eagle continued to have food every day. As fantastic as this story is, some truth is. Especially in response to the liver, an organ that is located in the upper right part of the abdomen and that has the peculiarity of regenerating itself. A few years ago, according to a study led by medicine professor Steven Artandi for Stanford University, it was discovered that liver regeneration is the cause of enzyme expression; Telomerase

With this, telomerase becomes responsible for the eternal youth of the liver, since its activity keeps the chromosome structure intact in each cell division, preventing its ends from shortening. This happens in normal conditions, but also when the liver is damaged by disease. Arrived here, we can assure you that the regeneration of the liver of Prometheus was not due to the titanic nature, but to its high telomerase. Science always comes to clear mythological unknowns.

In the end, Prometheus would be released by Heracles, but throughout his life he carried the shackles of a sentence that the psychoanalytic act identifies with the guilt complex. Carl Jung would find similarities between the Titan Prometheus and the fire of sacrifice led to his Sanskrit etymology, where "math"(steal) is related to manth (rub). In this way, the palitroques rubbed together to achieve fire are called Pramantha With these things, Jung concludes that the fire of sacrifice is a sexual matter, as, all excitement tends to manifest rhythmically and to rub two palitroques and cause fire requires some rhythmic fever.

Finally, say that Engels continued to study invisible elves and hands in the fetishistic relations of human beings with merchandise. In his time, he maintained an open war with a philosophical current that emerged in Germany between certain doctors and naturalists that Engels called representatives of "cheap materialism" and among which were Ludwig Büchner, Karl Vogt and Jakob Moleschott. Advocates of a "monistic materialism" argued that the brain secretes thought in the same way that the liver secretes bile. It was Karl Vogt responsible for reaching such a rough conclusion, ensuring that "between intelligence and the brain there is the same relationship as between bile and liver, or urine and kidneys."

After such aphorism, it can only be said that sometimes, materialism becomes so vulgar that it is best to take refuge in the heights, near Mount Olympus, in order to free our unconscious from bile.