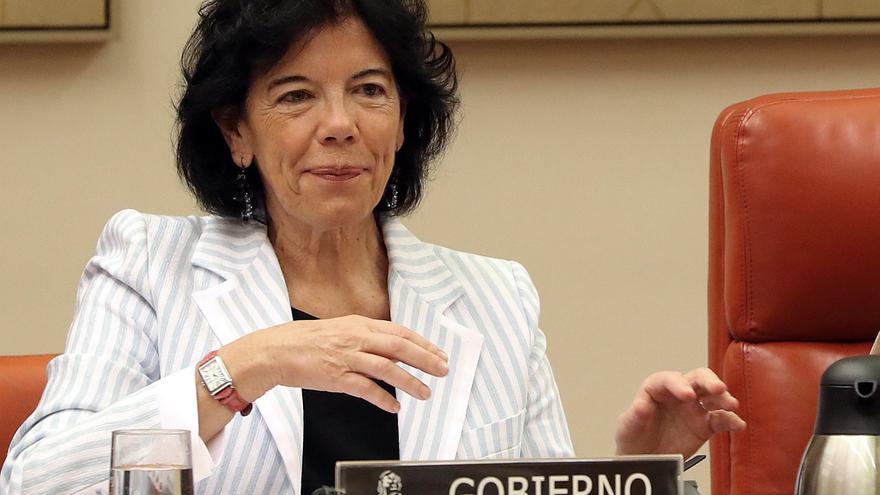 First test passed. The congressional presentation on the LOMLOE, the new Education law intended to replace the LOMCE, this afternoon approved several amendments and gave free rein to the project, which passes its first examination and continues its parliamentary process supported by the parties that made possible the investiture of Pedro Sánchez, especially ERC. Among the amendments validated this Thursday (behind closed doors) highlights the reinforcement of Catalan language immersion agreed between the Government and the Catalan Republicans and two measures on the concerted school: the prohibition of giving concerts to centers that segregate by sex and the prohibition also of giving public land to these centers, a common measure in the Community of Madrid and , when the PP ruled, in the Valencian Community.

The dispute, parliamentary and extra-parliamentary, promises to be noisy and long. The PP already stated in the morning that “the Government is handing over education in exchange for votes to strengthen its budgets”, in the words of the spokesperson for the popular parliamentary group, Cuca Gamarra, who anticipated the result of the vote. The party’s president, Pablo Casado, announced on Thursday that they will appeal to the Constitutional Court the suppression of the reference to Spanish as the vehicular language of education and the, as interpreted by the PP, attack on the freedom of educational choice that the law implies. Citizens have spoken in similar terms, and the employers of the concerted school have declared war on LOMLOE and the minister creating a platform to collect their complaints and protest actions: this same Thursday they met at the door of Congress to protest in what is announced as the first in a series of weekly protests.

In this afternoon’s presentation, which is responsible for lightening the work for the subsequent Commission and Plenary, more than 200 amendments have been voted, according to parliamentary sources, although most are technical or considered minors (a request to change an “educational administrations” for “autonomous communities” to refine more or a “what is mine” of the nationalist parties) and they do not go ahead. But, in addition to those approved, other amendments have been conspicuous by their absence, at least for the moment: the possibility of reducing by law the ratios of students per class, probably one of the main demands, if not the most, of the teaching staff. United We can registered its own petition in this regard, but it did so without the support of the PSOE and it has not gone ahead. Everything remains the same in this regard: the ratios will remain at a maximum of 25 students per class in Primary, 30 in Secondary and 35 in Baccalaureate (all expandable by 10% in exceptional situations that sometimes are not so much). The Ministry of Education and the PSOE claim the figures are a maximum and that it is in the hands of the autonomous communities to lower them, if they wish.

“We fulfilled one of our commitments, to repeal the LOMCE, a retrograde, commercializing law that could not provide education at the service of the citizenry. We are especially satisfied because in these difficult times, in which it seems that parliament only serves to discuss, we have given good news to all citizens, “said Joan Mena, spokesperson for United We Can at a press conference.

Government and nationalists vs the right

In any case, the LOMLOE is a step closer to being a reality and landing in the educational system next year as the Government intends – at least partially, the curricular part will have to wait because it requires a slow legislative development with Royal Decrees and lower to the autonomous communities. It will be the eighth educational law in 40 years of democracy, although not all have meant a break with the above. The government parties, PSOE and UP, have sought the support of ERC and other nationalist groups to overcome the opposition of PP, Ciudadanos and Vox to the amendments they presented. Thus, the sum of the votes of the center-left and nationalist parties has imposed its majority to approve its changes and reject those of the right.

The new educational law will therefore prohibit the granting of educational concerts to those centers that segregate their students by sex, a measure that José Ignacio Wert introduced with the LOMCE (Here is a neat chronology on the legal evolution of the matter of concerts at centers that separate by sex). The PSOE appealed it to the Constitutional Court, but this one validated it. This decision by the TC could lead to a conservative party appealing the ban. PSOE and UP argue that it is one thing for the Constitutional Court to endorse it as legal and another that it has to be a reality. The new wording of the law says: “The centers supported partially or totally with public funds will develop the principle of coeducation in all educational stages”, according to the 2007 equality law, and “will not separate the students by their gender.”

It is not the only novelty approved today regarding the concerted school. The Education report has also agreed to prohibit the transfer of public land for the construction of concerted schools, a measure that has been carried out with some frequency in Madrid and before, when the PP ruled, also in the Valencian Community. “Especially in the new concerted one”, has qualified Mena.

Another novelty in the articles of the law will be the elimination of the reference – which the LOMCE also introduced for the first time and which the original wording of the LOMLOE respected – that Spanish should be “the vehicular language” of Education. This formula has been replaced by a generic one “the educational administrations will guarantee the right of the male and female students to receive teachings in Spanish and in the other co-official languages ​​in their respective territories, in accordance with the Spanish Constitution, the Statutes of Autonomy and the applicable regulations “intended, according to ERC, to” shield language immersion in Catalonia “. The amendment has gone ahead with 26 photos in favor, 16 against and one abstention, of the PNV.

Despite the fact that, according to the experts, this will not have much practical effect in the classrooms because the Justice already began to regulate the use of Spanish in Catalan schools before national laws were concerned with the issue, the matter also anticipates political row and, probably, judicial resources. And that along the way has also been an amendment of the PNV by which the nationalists intended to establish Euskera as the vehicular language of education in Euskadi (and in each community with its official language).

All these measures approved this afternoon will have to be ratified in the Education Commission next week, which is expected to happen without news with the support of the same groups that have validated them today, and from there they will go to the Plenary of Congress to its approval and submission to the Senate, where further modifications may still be made before its final return to Congress so that it can validate or discard the hypothetical changes approved by the Upper House and the law is definitively approved (predictably).