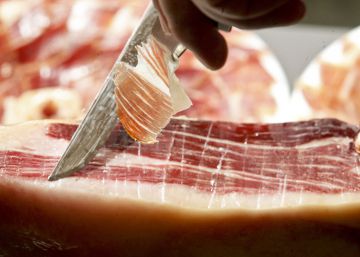 Facua has denounced Comapa, the largest distributor of Iberians in Spain and supplier of Carrefour, before the General Directorate of Consumer Affairs of the Community of Madrid for selling hams from Poland under the labeling of Hams from La Alpujarra (Granada). The alarm was given by the Association of Producers of Granada, which transferred its complaint to Facua denouncing that commercialized hams by this brand as alpujarreños come from pigs raised in the Polish country whose meat has been cured and packaged in other Spanish provinces, such as Segovia, but in no case in the towns of La Alpujarra in Granada.

The consumer association has indicated that the labeling of these products entails “Misleading advertising” and urges Administrations to remove them from the market. Comapa admits that the pigs are Polish, but guarantees that all their brands are registered and that the production of the hams that it sells is carried out in Granada's dryers, where the company that issues these Iberian pieces resides.

In 2016, the Association of Producers of Granada registered the Jamones La Alpujarra guarantee mark before the Junta de Andalucia to end the misuse that many companies made of unprocessed products in this region, such as Comapa. Against it the association adds 15 complaints to the General Directorate of Consumption and the Ministry of Agriculture of the Junta de Andalucía, since in May 2018 the first of them filed after being aware of the fraud they expose. "We strongly oppose that they put in the labeling that they are from here, when we are certain that they are not," says Pilar Álvarez, representative of this association.

The previous premise is one of the indications that appear in the specifications that have been prepared to testify that a ham has been made in the region. Among other indications, this text formulates that the ham must come from a female or a castrated male, which should not contain additives or preservatives – only ham and salt – that the fresh weight of the pieces is at least six kilos for the pallets and at least nine kilos for the hams, or that the cure of these occurs at least between 16 and 20 months. The association, in fact, ensures that the hams made by Comapa are only cured for eight months, hence their sales prices in large supermarkets such as Carrefour are around 25 euros per piece, for an average of 80 euros for the pieces that companies registered to the employers market. “The hams they bring from Poland are of poor quality,” says Álvarez.

Comapa, the leading Iberian company in Spain, through a statement has explained that the brand it holds, Sierra Alpujarra Hams, was registered in the Patent and Trademark Office (OEMP) in March 2016, even before it is employers the guarantee mark was created in July 2016, which they have challenged judicially, they report. The company admits that the pigs are of Polish origin but declares that “Poland is a country of the European Union”, as other producing provinces of Spain are also part of the EU, so this country is protected by the “same legislation ”And the“ requirements to be met are the same ”as in the rest of the countries from which a raw material may come.

In parallel, this company denies that the hams it sells are cured and packaged in other Spanish provinces. They point out that the area of ​​elaboration of these Iberian pieces is the province of Granada in the different dryers of the company, located in Atarfe, Otura, Trevélez and Busquístar. And it markets its hams brand 'Sierra Alpujarra' issued through a group company, Jamones Oro de Granada SL, registered in the Sanitary Registry of Food Companies, located in the province of Granada, as stated in the mention Granada of its labeling.

The Association of Producers of La Alpujarra is constituted by seven companies producing ham with this origin. Francisco José Fernández has been leading one of them for more than 30 years. Manager of Jamones de Juviles, a family business that inherited from his grandfather and his father and that adds more than 60 years in the Iberian market, admits feeling angry at seeing how a foreign company owns the La Alpujarra brand. "I feel helpless to see how my father and my grandfather have been fighting to make a name in the market for hams in the region and now a company uses that brand without producing in the area."

He also regrets that this is why the guarantee brand is losing strength and prestige in the market. "They are denigrating the popularity of this." This is shared by Felipe Jerez, top leader of the ham production company that bears his name, also integrated into the Association. "They make a bad propaganda of the quality of the ham of La Alpujarra." Jerez, whose company produces 20,000 pieces per year, has seen how its benefits have been reduced because of the problems generated by Comapa.