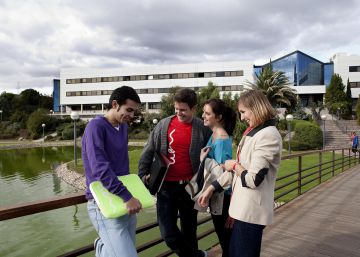 The reopening of private and subsidized centers is being a hieroglyph. According to their degree of independence with the administration, the schools adapt the protocols of the Ministries with greater or lesser freedom, with an eye to the Conference of Presidents at the end of August between the Government and the autonomies that will just be defined measurements in the new virological context. Until then, the intention of the concerted and private schools, despite the fact that the pandemic curve does not stop growing, is for students to rejoin in person in September.

All the employers’ associations and representative unions of the sector (among which is the Association of Autonomous Centers of Private Education, the Spanish Confederation of Education Centers, CCOO, UGT, among others) have signed a minimum agreement for the field of education concerted education, infant education from 0 to 3 years old and private regulated education without agreement. The texts insist that the centers must follow the guidelines set by each Ministry and give a series of general measures that must be adapted or modified according to those established by the Ministry. The documents include standards for personal hygiene and for the center, organizational measures such as entering the classroom in a staggered manner, the creation of classroom groups (bubble groups) or an action plan in the event that a positive is detected.

“The beginning of the course will be moved because there will be outbreaks, what is determined in Andalusia will be very different from what is done in Madrid or in Catalonia”, warns Pedro Ocaña, secretary of Private and Socio-educational Services of CCOO. “The course has already ended in a different way because each council acted differently and now it is likely that the same thing will happen again,” adds Ocaña.

Private university centers have also developed their own individual security measures. “The reason is that, unlike schools, which have a great similarity between them, universities change their organizational structure a lot with respect to each other,” explains the head of private education at UGT, Jesús Gualix. An example is the European University (present in Madrid, Valencia and Tenerife) that provides blended classes. Its protocol revolves around four axes: adaptation of the facilities to reduce class capacity to 50% or include partition walls in common areas. Security protocols that include testing all employees and taking the temperature through cameras at the entrance of the buildings. The third axis is to ensure the formation of preventive measures and the fourth, the implementation of a “flexible” academic model. 20% of the teaching will be face-to-face in small groups, 60% of the classes will be combined face-to-face and virtual classes according to the health circumstances and the preference of each student. And 20% that will be totally digital. The University also imposes the use of a mask.

The protocols are reinforced in the private

In this context, private centers have a greater scope of action to adapt their security measures to possible epidemiological scenarios in an autonomous way than those that have been arranged, which have to take advantage of the counseling plans. “All our schools developed protocols based on those that were published by both the Ministry of Education and Health, as well as those issued by the different ministries. But individualizing and particularizing them, depending on the spaces and facilities available to them, ”explains Elena Cid, director of the Association of Private and Independent Schools (CICAE).

Many private centers already reopened in July for summer camps and were able to test their protocols for September, reinforcing them to the new scenario that some health advisers already call second wave. “Many reforms and extensions have been undertaken for the use of common areas (libraries, computer rooms, outdoor spaces or function rooms). Many schools plan to divide their groups to further reduce the ratio, more staff have been hired to be able to unfold and serve small groups. Technology has also been acquired to be prepared in case of having to carry out a blended education ”, Cid lists.

“We are connected every day, checking the news to adapt our protocols at any time,” explains Maricruz Lagar, director of the SEK school in Madrid. The organization of this center reflects the level of autonomy that private education has to protect itself against the virus.

“Being able to open the school in July has helped us to reflect and structure a protocol for September,” says Lagar. The security measures of this school include the marking of each desk at all educational levels to guarantee the distance of 1.5 meters, individual material in antibacterial boxes, bubble groups and video calls so that they interact with other groups, staggered entrance to the center, gauges in the bathrooms and even its own mobile application to trace the positives in the center.