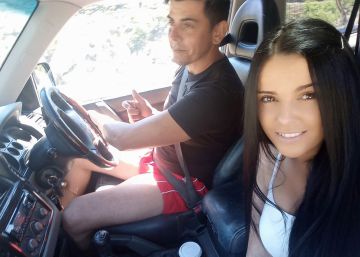 The Court of First Instance and Instruction number 1 of Vélez-Málaga, on duty, has ordered this Saturday, at the request of the Prosecutor's Office, the entry into provisional, communicated and without bail of the detained man in relation to the disappearance of your partner. Sergio R. was brought to justice by the Civil Guard at 12 noon on Saturday, shortly before the 72 hours had elapsed after his detention on the afternoon of last Wednesday for his alleged involvement in the disappearance of the woman from 31 years.

The judge, who raised this Saturday the summary secret that weighed on the proceedings, attributes an alleged crime of manslaughter. As a precautionary measure, and also at the request of the Public Ministry, the judge has withdrawn parental authority over the 10-month-old daughter they have in common and has imposed a restraining order on her. During his statement, the investigated has denied the facts attributed to it.

The discovery of a human bone, a few days ago, by a neighbor in the area, accelerated Sergio's arrest. Research sources have explained that DNA tests were performed and the results determined that it belongs to Dana. For the Civil Guard, the girl's boyfriend has always been the main suspect, both for his overacting and for the contradictions of what he has been declaring. Also by the geolocation of your mobile phone, which places it very close to the area where the human bone rest has been found. The case is under summary secret.

The Malaga - who is the only one investigated for the disappearance of women - continues to defend his innocence, as his lawyer, Juanjo Romero, has repeatedly stressed in recent days. The lawyer has also indicated that he has "no official confirmation" of the DNA tests. He explained that Sergio has always thought that Dana had left for Romania. "The theory he had is that he had abandoned him because time had come announcing it to him, that he was going to leave overwhelmed by the situation generated by the debt situation, ”said Romero, who also dropped that another of the situations in which the young woman“ did not feel comfortable ”was with her daughter.

Both Thursday and Friday, the Civil Guard has carried out various investigation procedures at the address that Dana and Sergio share in the municipality of Arenas. Up to there, teams from the Criminalistics Service moved from both Madrid and Malaga, which have inspected the house hand in hand for evidence. The agents have looked for any kind of clue that can help them clarify what has happened to the Romanian girl, of whom nothing has been known for three and a half months. The search also took place at the end of last June, when the agents were surprised to see that Sergio had cleaned the house with bleach and whitewashing some walls. According to his lawyer, he did it to “disinfect” the dirt caused by his dogs and to improve the family home before the imminent visit of the Social Services to verify the situation in which he lived with his daughter.

In parallel, about fifty civil guards have intensified during the last week the search work in the mountainous areas around Arenas. A work involving agents belonging to specialized units such as the Underwater Activities Group (GEAS), the Mountain Team, the Nature Protection Service (Seprona) and an Air Service helicopter, as well as the Cinological Group, with trained dogs.

The last time Dana Leonte was seen - 1.60 meters tall, long brown hair, brown eyes and thin build- was on June 12. The last contact he had with her was that night at 22.36, when his mobile phone appeared online on WhatsApp, according to the now arrested. In those days he denounced coercion by the Civil Guard to obtain his confession. "But how am I going to confess, if it wasn't me," Sergio then told the media.