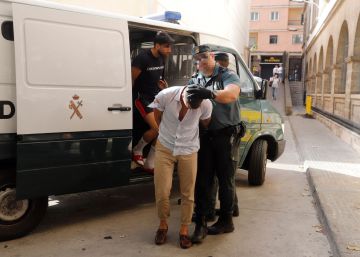 The head of the number two investigative court in Palma on guard duty has ordered the admission to provisional detention and without bail for two of the four German tourists arrested last Thursday to whom he imputes a crime of sexual assault against a compatriot of 18 years. In addition, he has freed the two others implicated in the facts with charges of concealment. The alleged perpetrators of the attack were transferred this Saturday shortly before midnight to the prison in Palma.

The four detainees were taken to court this Saturday in Palma's courthouse after spending 48 hours in police custody. They counted on the help of a translator and were assisted by lawyers of the shift of office. After giving a statement late in the afternoon and denying the facts, the judge on duty saw evidence of criminality on the part of the two young men and ordered her to be remanded in custody. The other two detainees have been released on charges and without precautionary measures.

Three of the young people, aged between 19 and 23 years old,They were arrested last Thursday at the security control of Palma airport when they were preparing to catch a flight back to Germany. The operation stopped a fourth tourist who was part of the group and was released hours later because he had an alibi for the time of the events, to confirm the researchers who had been in the company of another girl. However, the agents in charge of the case arrested a young German man in Cala Rajada on Friday because of his alleged relationship with the facts.

The victim of 18 years and a German nationality accuses them of a sexual assault occurred during the early hours of Thursday. According to the report, he met the boys in the leisure area of ​​Cala Rajada, in the municipality of Capdepera in the north of Mallorca. After engaging in conversation with them and being around the bars in the area, the arrested asked him to go to the hotel where they were staying. According to sources of the investigation, the victim narrated that once in the room one of the detainees grabbed his arms while another consumed the rape. The girl got out later and came to file a complaint that same morning.

The Civil Guard referred the young woman to the reference hospital in Son Espases, where she was examined by a doctor who determined that she had lesions compatible with sexual assault. The investigators then gave notice to the rest of the units and alerted the agents of the Son Sant Joan airport in case the suspects showed up at the scene. Early on Thursday morning they were arrested when trying to pass security control to return to Germany after several days of vacation in Mallorca.

Sources of the Civil Guard explain that during the day of Friday the investigators were dedicated to look for witnesses and to gather declarations on those happened during the night. At least a dozen people gave evidence to the agents because they saw the girl with the group in some establishments in the town and around the hotel. The agents try to determine the degree of involvement of each of the accused.