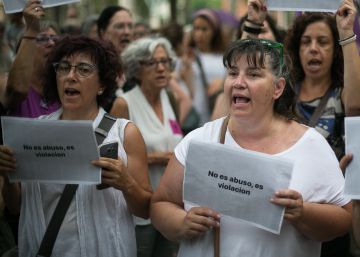 The court of instruction of Reus has decreed provisional detention for three men who are accused of having raped in group a woman in an apartment Cambrils (Tarragona). The prison sentence gives credibility to the report of the complainant, who gives a "serious, firm and coherent statement, with a univocal and unequivocal version".

The facts would have happened on the morning of June 24. After finishing his work shift in a nightclub, the victim went to a home in Cambrils where, in the company of the three defendants and others, they were drinking and eating. After a while, the woman locked herself in a bathroom in the house with a person and they maintained relations of mutual agreement. The car records that, later, the woman maintained an approach with one of the defendants and "after intimate", they entered a room. They were followed by another of the defendants who, upon entering, closed doors and windows. "Both investigated and the complainant sat in the bed of the room and talked for a short space" of time, details the investigating judge.

Then, the men began to kiss and make touching to the woman, "who was plunged into a state of shock by the situation of intimidatory nature." The investigated stripped the complainant of his clothes and began to penetrate, without the consent of this " . The third accused later accessed the room and, allegedly, penetrated the victim. She, "anguished", asked them to stop and, two of them, left the room. But one of the attackers continued in the bedroom. The complainant identifies him as the man who had closed doors and windows after entering, minutes before, by surprise in the room. This would have prevented the woman from leaving, until a friend of hers intervened and managed to help her.

The judge states that he has sufficient evidence to establish that there was "a sexual relationship of a group nature" and that, after the facts, "the complainant shows herself tearful, despondent, frightened and in a state of shock". In addition, the forensic report and the health documentation define diseases compatible with the facts. The detainees defend that sexual relations were consensual, but, according to the judge, "certain contradictions and unjustifiable inconsistencies in the demonstrations are appreciated".