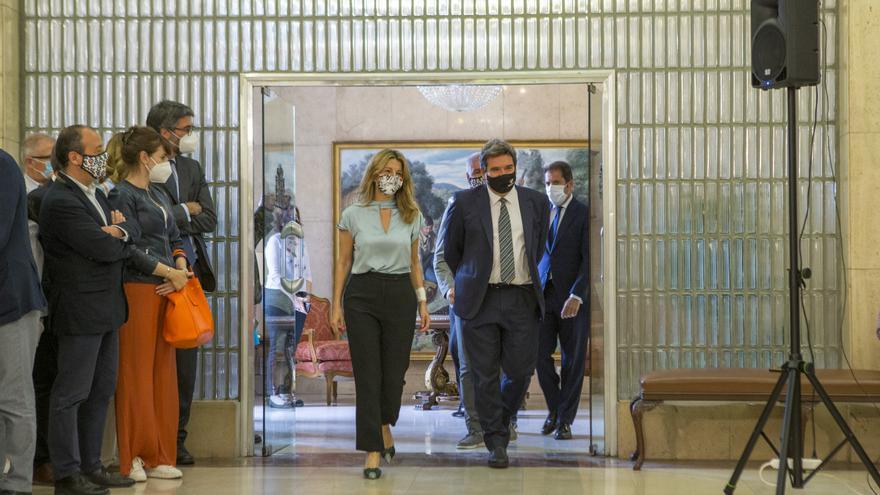 Pre-agreement to renew the ERTE. The sixth extension will finally be broader than expected, until February 28, which has been the Government’s last proposal to the social agents on Monday afternoon. The businessmen are voting on the Executive’s offer tonight in their internal organs, as they have done on previous occasions. The forecast is that the employers will support this sixth extension and that it will be approved tomorrow in the Council of Ministers, explain sources of social dialogue.

Employer sources confirm to elDiario.es the internal consultation tonight, but they still refuse to speak even of a preliminary agreement, as they do from CCOO and UGT. Entrepreneurs only admit the existence of a pact once the CEOE and Cepyme bodies endorse it, these sources recall, so they prefer to wait for the result of the consultation.

The majority unions have announced the principle of agreement, which they have celebrated for the improvements achieved during the negotiation of social dialogue. For example, “the extraordinary benefit is recovered for people with discontinuous fixed contracts and the counter is guaranteed to zero for this group, which was not previously guaranteeing,” CCOO points out. The UGT also underlined the special mechanism negotiated for the Canary Islands, due to the volcanic eruption on La Palma, with “exemptions of 100% in ERTE of impediment and 90% in ERTE of limitation”, among other measures.

The negotiated extension would be applied in two phases. At the moment, it would be extended by a month the current ERTE system, until October 31, to give companies time to re-process the ERTE application, because this time it will not be automatic. The idea is that companies have to reapply to the labor authority for this employment protection mechanism so that there is more control against cases of fraud.

The second phase of the extension would begin on November 1, until February 28, when the new conditions negotiated with the unions and majority employers in recent days would begin to apply. In this extension, training will play a central role, especially in companies with more than ten workers, but it is not mandatory for companies to take advantage of the contribution aid, as Minister José Luis Escrivá intended at the beginning .

More help if there is training, but not required

The Ministry of Social Security has maintained its approach of linking aid to companies in ERTE to that they plan training for affected employees, but with a more flexible approach than what it initially proposed. The exemptions in the quotas are not conditioned to the qualification plans, but they will be much higher if the companies present a project in this regard.

As explained by the UGT in a statement, companies with more than 10 workers would obtain a 40% exemption in quotas in the event that training is not provided, while this would double, up to 80%, in the case of that it is imparted.

In companies with up to 10 workers, they would benefit from a 50% exemption in the quota without training for the workforce, while in case of offering it, the savings in social contributions would rise to 80%, says UGT.

‘Counter to zero’ in unemployment until December 31

Unemployment protection for workers in ERTE would remain at 70% of the regulatory base (similar to salary), as up to now, and those who had not contributed enough to do so would continue to have access to the benefit. The so-called ‘zero counter’ by which ERTE employees do not consume the unemployment perceived so far in the event of being laid off, would be extended until December 31.

The mechanism has been operating since October like this: the worker sees their days of right to unemployment reduced while they are collecting the ERTE benefit. In the event that they were dismissed before the deadline for the counter to zero, the SEPE will again replace the days of unemployment that had been eaten during the temporary regulation file.

The agreed term represents an extension of this guarantee by one year, since in the ERTE mechanism in force at the moment the limit of the meter was set at December 31, 2021. At the beginning, the Ministry of Labor negotiated with the unions that This period will be extended until the end of June, but once the companies have pressed for more aid in social contributions, the workers’ representatives have also demanded that this measure that benefits the employees be extended, explain sources of social dialogue .

The unions have advanced that the new extension continues with “the obligation to maintain employment” of six months after the ERTE, the prohibition of overtime and new contracts or subcontractors in the companies that have these procedures in place, as well as the veto of the distribution of dividends. The prohibition of objective dismissals and the interruption of the calculation in temporary contracts would also be maintained.