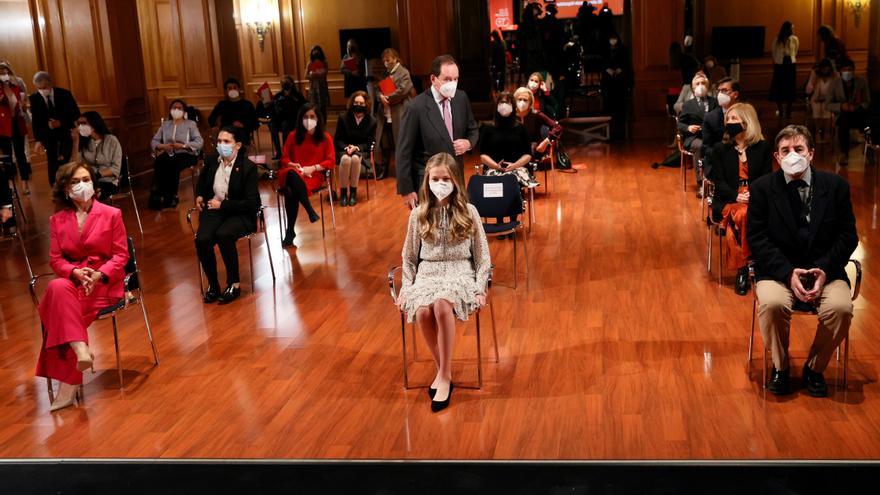 Madrid, Mar 24 (EFE) .- Princess Leonor began her visit to the central headquarters of the Cervantes Institute in Madrid on Wednesday, in her first official act alone, at the Caja de las Letras, where she deposited individual copies of the Constitution and Don Quixote as a permanent legacy.

The eldest daughter of the kings, protected with a mask, has entered the building accompanied by the first vice president of the Government, Carmen Calvo, the director of the Cervantes Institute, Luis García Montero, and the Secretary of State for International Cooperation, Ángeles Moreno Bau.

Several dozen people have gathered outside the headquarters under the slogan “The future is Leonor” to give encouragement to the princess.

“Long live the king and long live the princess!” Chanted the people summoned by the Spanish Royal Concordia association.

Once inside, the 15-year-old heir to the throne and the authorities have gone to the Caja de las Letras, the most symbolic place in the building, where the legacies of the Cervantes prizes and other cultural figures are kept. Spanish.

Leonor de Borbón has saved for history in one of the boxes, the number 2021, the copy of the Constitution that she read on October 31, 2018, in her first words in public, also at the headquarters of Cervantes.

Next, he has placed inside the book “Don Quixote” with which he participated in the reading of the work of Miguel de Cervantes on April 23 with the Infanta Sofía through a video recorded in the Palacio de la Zarzuela due to the pandemic.

The box reserved for the princess is located between that of the doctor Severo Ochoa and the writer Miguel Delibes, who was the last of whom a manuscript was saved, posthumously, on the 12th.

The Caja de las Letras is the vault of the banks that used to be in the building and that since 2007 houses the legacies of the winners of the main award for letters in the Spanish language and of outstanding people from literature, film, music , theater or science.

Unlike most memories, which are kept with a specific opening date, in the case of the princess it will be kept permanently.

García Montero thanked the princess for her presence and her memory.

“Here we preserve the legacy of great artists and representatives of Spanish and Latin American culture. That is why their presence here today is very important,” said the director of the Cervantes Institute.

The tour will be completed in an exhibition with outstanding works of literature in Catalan, Galician and Basque from Spain.

The Cervantes Institute is going to give you three books published in different Spanish languages.