In May 1992, Spain was going full steam ahead. With European funds pouring in to bring the country closer to EU standards and unprecedented investment for the Seville Expo and the Barcelona Olympics, the overheating of the economy brought with it strong pressures on prices.

Almost 30 years have passed, but that was the last time that the Consumer Price Index (CPI) that the INE prepares monthly
it was above the 6.5% that the index has marked this past month of December. This time the Spanish economy is also being pushed by European funds, although its application is still limited, and it also shows a respectable growth rate, although

The reasons for the inflationary spiral are different: energy prices and problems in supply chains.

There is a broad consensus on the causes of the problem, few expectations about its short-term solution and, yes, a very high level of uncertainty on the consequences it may have on the Spanish economy. “In virtual terms, the growth of the economy would be negative right now,” he warns. Anthony Pedraza, president of the Financing Commission of the College of Economists of Spain, referring to the fact that the inflation rate has been above the rate at which the economy is growing for a couple of months, around 4.9% according to the latest official information published by the Ministry of Economic Affairs.

“We have already reached the point where the economy is deflating,” he says, or, in other words, to the point where the rise in prices is eating up the growth of the Spanish economy. What the Government recorded in the economic report that accompanies the budgets as a transitory phenomenon that would disappear between the end of 2021 and the beginning of 2022 has been consolidated as an economic risk at the same level as the pandemic itself.

The first signs of an inflationary spiral

The risk that the punctual tensions due to the
energy price pressure transferred to the economy as a whole, thus triggering an inflationary spiral that is getting closer to materializing. The information provided by the INE reveals that if in August there were barely a dozen items of goods and services -among the 56 from which the CPI is compiled- in which prices were experiencing an increase of more than 2% per year , at the end of the year that figure was already 26, almost half of the index. 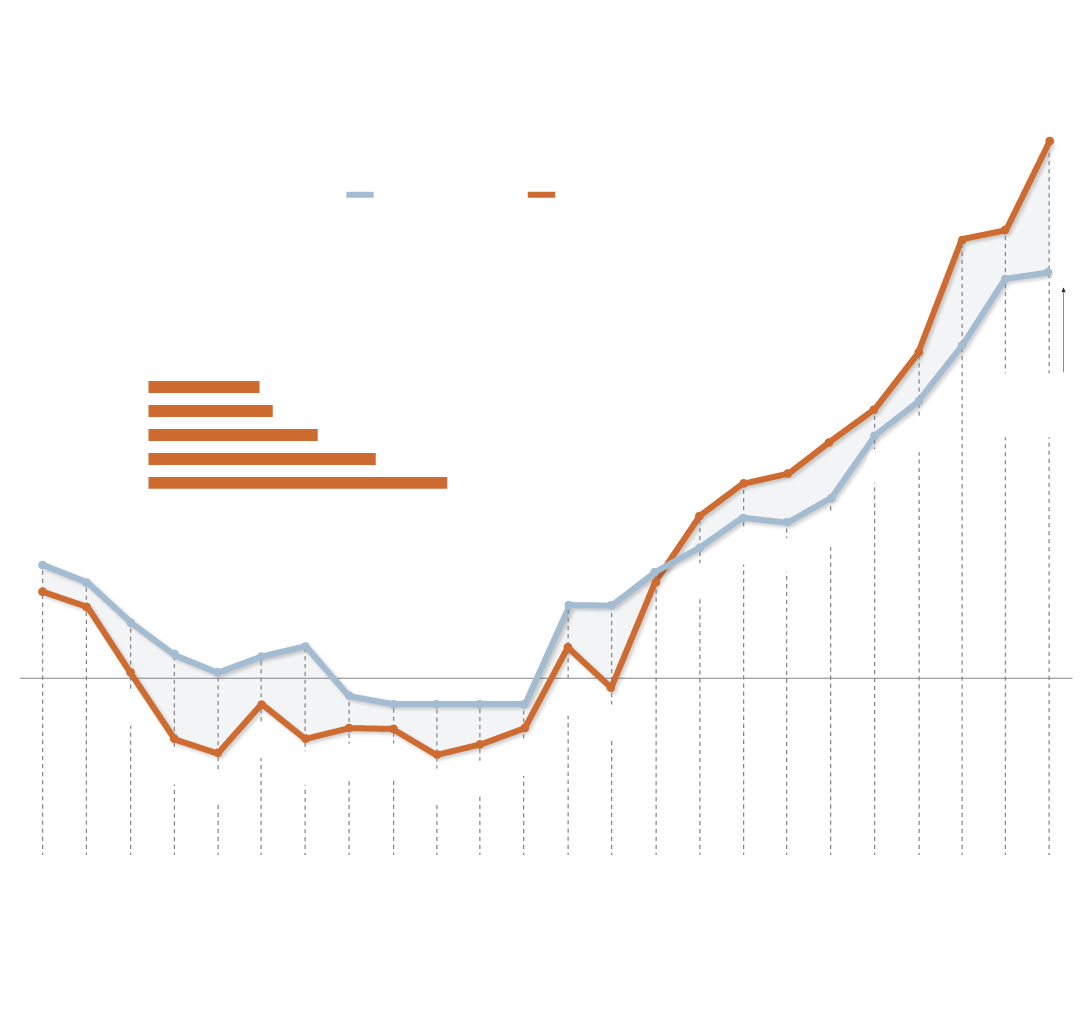 and services with increases

with annual increases of more than 2%

“You already appreciate the transmission by companies of higher production costs to final prices consumption,” he says. Maria Jesus Fernandez, senior economist at Funcas. “Our forecast is that prices will remain at a level of between 5% and 6% in the first months of the year and that they will only start to decline after spring. What is causing this is an impoverishment of the country, since it narrows the margins of companies, which hinders economic recovery, and reduces the purchasing power of citizens, which acts as a brake on the reactivation of consumption.

The way out of the problem is complicated. Discarded by governmental imperative the option to lower taxes companies to preserve their margins in the face of rising prices of raw materials, as has been done in Italy or France, the option of improving the income of citizens appears to maintain the pulse of consumption and prevent a slowdown.

This scenario terrifies not only the experts but also the Vice President of Economic Affairs, Nadia Calviño, who has already made several calls to contain salary demands in collective bargaining to prevent encouraging this inflationary spiral.

The risk of a general rise in wages

“We are facing a mainly circumstantial phenomenon,” he observes. Javier Ferry, Fedea researcher. “But its duration and depth will depend on the behavior of economic agents: how workers react with their salary demands in collective bargaining, and how companies react when transferring their higher production costs to prices. If they do not assume part of that cost, we will begin to have a problem ».

This was warned just a few days ago by the governor of the Bank of Spain, Pablo Hernandez de Kos, which expressly urged companies and workers to agree on the distribution of the costs of this crisis, so that it is not charged exclusively to the workers’ wages nor only to the margins of the companies, but that they are distributed in a equitable to avoid consolidating a price spiral.

The inflationary episode has come to the Spanish economy at the worst of times, when it is still trying to recover from the sovereign shaking of the early stages of the pandemic, which marked Spain as the developed economy most damaged by Covid, and, in addition, , has brought back some of its most familiar ghosts, such as competitiveness.

It is no longer just that the CPI has shot up to levels not seen in 30 years, it is that for the first time after the financial crisis, domestic inflation has recovered its bad habit of climbing above the euro zone average, that nightmare for the competitiveness of the Spanish economy that led to Luis de Guindos to invent a Deindexation Law to decouple the evolution of public prices and wages from the CPI.

Statistics data reveal that since last March the Spanish CPI has been above the euro zone average and that this gap has continued to widen. At the end of the year, the CPI harmonized with the EU -somewhat different from the general index- was 6.6% in Spain and 5% in the Monetary Union.

“It is early to say that it will have an impact, but if it continues over time, it will be detrimental to competitiveness,” Javier Ferri warns. Why does the CPI rise more in Spain than in the euro zone? Ferri points to an economy with a lower level of productivity and with endemic problems of competitiveness that have not yet been solved. For Antonio Pedraza, from the College of Economists, the phenomenon is not unrelated to a government policy that has encouraged non-productive public spending, to the detriment of both public and private investment.

The effect of the Christmas campaign

The CPI rose 1.2% in December on the back of the Christmas campaign. Leaving aside the headings linked to electricity, it was food and beverages and clothing and footwear, which contributed the most to the rise, which brought the year-on-year figure to 6.5%. This does not mean that prices have become more expensive by 6.5% in 2021, they have done so by around 3%, but rather that they are 6.5% higher than those registered in December 2020.

Core inflation, which strips out energy prices and the more volatile elements of the index such as fresh food, also climbed to 2.1% from 0% last April, indicating how energy prices have pulled up the whole.

The increase in the cost of the heading that reflects the evolution of the price of electricity has increased by 46.8% in 2021.