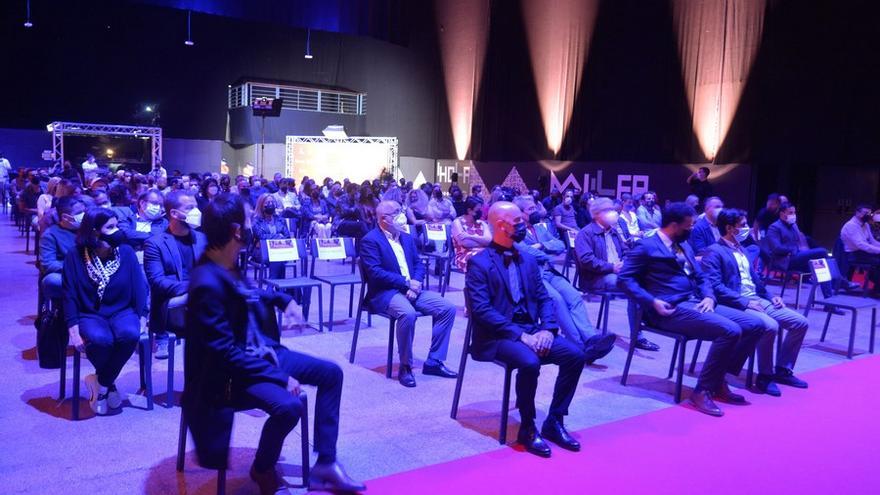 The preview yesterday in Las Palmas de Gran Canaria of La piel del volcano, the first feature film by director Armando Ravelo, became a heartfelt tribute to the Canarian identity by the films made by Canaries in the Canary Islands, a reason more than enough As for this first public screening of the film to end on Monday becoming an event that brought together some of the most prominent names in culture and politics.

A love letter to the Canary Islands

Román Rodríguez, vice president of the Government of the Canary Islands, and Antonio Morales, president of the Cabildo de Gran Canaria, it can be said that yesterday they sponsored the young team that has been in front of and behind the cameras of this production, the first to be filmed in the Canary Islands after the toughest months of confinement in 2020. “Making films in the Canary Islands is very difficult and in these circumstances it has been even more so,” explained Luis Luque, from Hormigas Negras, producer of La piel del volcano with Proyecto Bentejuí and Doble Diez Televisión, whose leaders, Pedro Pérez and Santi Falcón, respectively, were also yesterday at the ceremony held in the Miller building in the capital of Gran Canaria between strict sanitary restrictions.

A love letter to the Canary Islands

With yesterday’s preview it became clear that a new batch of filmmakers has come to illuminate the past of the islands, approaching the history of the Canary Islands without prejudice with fictional stories through the reconstruction of events that, despite being ours, do not stop be shameful, as for example in the case of La piel del volcano, the repression of the Franco dictatorship or the extermination of the aborigines, which first occurred by the conquerors and, later, by the Canaries of several generations who for different reasons obviated the island identity even in schools. If we add to that that there is also a plot about political corruption in the film, there is no doubt that Ravelo has managed to portray the Canary Islands of yesterday but also that of today.

A love letter to the Canary Islands Miguel Ayala

Although Armando Ravelo’s work has been impressive, both signing the script and acting as director, bigger words deserve the interpretations of the three main actors. Mingo Ruano is, perhaps, the best Francoist repressor that the national filmography has seen in a long time. With the lights and shadows of his characters, the actor draws oil from each gesture, from each step, from his one-eyed eye, from his corruption … Even as a forced repressor who, nevertheless, has a heart, Ruano is enormous.

Maykol Hernández, who is going through one of his best professional moments after the success of the Hierro series, among others, is superb in his three characters – one of the characteristics of this film is that the three protas play three roles in three different moments of the film. story-. Yesterday, after the preview, Maykol Hernández could not hide his emotion, reminding the audience of his wonderful performance in La piel del volcano as an aborigine, Francoist reprisal and investigative journalist.

For her part, Yanely Hernández once again delights the audience with a restrained performance in which her gaze, perhaps one of the best in national cinema, penetrates the audience. There is no genre that chokes the interpreter and yesterday in Armando Ravelo’s tape she showed that she is one of the great actresses that this Archipelago has produced.