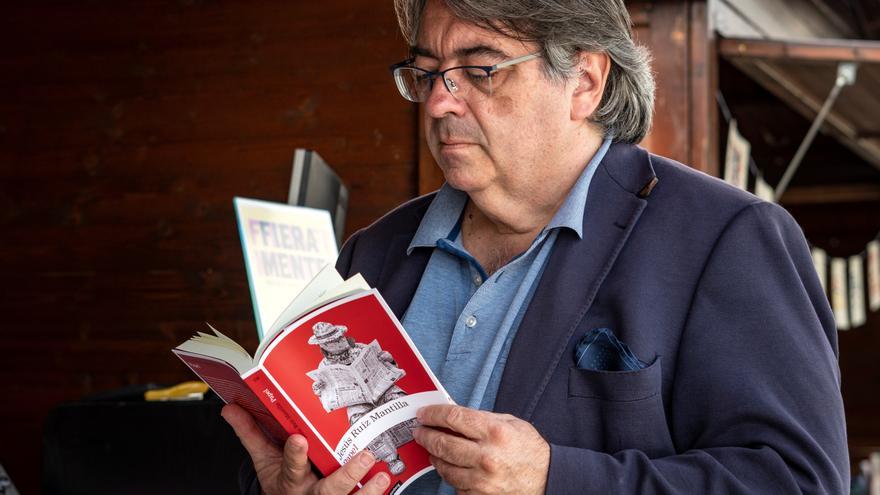 Santander, Jun 12 (EFE) .- Three decades of profession are worth Jesús Ruiz Mantilla to speak with knowledge of the cause of the transformation and the problems that threaten journalism, a job “in a great moment” because it is necessary, although in the last 15 years the pressures, which “have always existed”, have come “with disgusting impudence.”

“Papel” is the last novel by Ruiz Mantilla (Santander, 1965), in which it reflects the digital leap in the media and the clash between the old journalistic school and the push and new ideas of the millennial, told through of a veteran of the trade and a young woman glued to her cell phone.

That dichotomy in the newsrooms, the impact of the digital transformation and the “terrifying” omens on the future of paper had already been boiling in the head of Ruiz Mantilla for a decade, who did not sit down to shape “Paper” until four years ago. years he found the outcome he wanted for this story.

“I knew I wanted to write a novel about this matter, but I didn’t know how it could end, because everything was a very beastly uncertainty, very heavy, very deep, very real and you couldn’t see it … I had to go into that tunnel and on that trip, “he says in an interview with Efe Ruiz Mantilla, who is in full promotion of his book.

With his work at the newspaper El País he has lived through the “very brutal” crisis in the media, which has led to the disappearance of headlines and the destruction of many jobs, but, above all, this journalist warns of the loss of independence as a greater evil.

As he points out, “a newspaper is a very greedy company to be controlled by the political and economic strata that go into action directly and without complexes”, and that is why, in times of crisis, what is lost is “a lot of independence.”

In his opinion, one of the great challenges of “decent” journalism is to regain that independence and also to combat the pressures, which “have always existed” but which he sees more blatant and with “disgusting interventionism” in the last 15 years.

As a weapon in the face of this adverse scenario, Ruiz Mantilla wields personality, criteria, strength and the capacity for conviction, although he recognizes that “there are journalists who have risked it” by fighting this battle, and that they have even lost their job due to rebel against pressure.

Another of the evils he points to is that of misinformation and fake news, a fast-moving cog that spreads “lies like a hose everywhere.”

In his opinion, the media have an obligation to confront these falsehoods, although he acknowledges that it is a “quixotic” task in newsrooms reduced by the crisis, with fewer resources and with a cut multiplied by the pandemic. “But what is journalism if not a quixotic task?”, He asks when making this reflection.

It also affects the existence of “propaganda organs dressed as newspapers” and that seek to “delegitimize” the serious media.

And there Ruiz Mantilla appeals to the common sense of the reader and the newsrooms themselves as antidotes: the former to monitor and warn if something deviates from the truth, and the latter to collectively react if their independence is threatened.

He also reflects on the role of social networks, which he sees as a double-edged sword and compares with “a knife, which can be used to cut bread or to murder.” It all depends, as he points out, on who uses it, if someone with good intentions or with bad ideas.

It warns of the risk of falling into “acceleration” in that world of “hashtags”, retweeting and posts because, although in journalism being fast and decisive is a plus, you do not have to be accelerated and “many times the networks heat you up until you get there. ”

Ruiz Mantilla, who believes in spite of everything that journalism is experiencing “a great moment”, explains that in his other facet, that of a writer, he always has “a couple of books in his head.” “Once you see your latest work in print, the next one knocks on the door for you to listen to it,” he jokes.

Now he has in mind an essay related to the world of opera and another story about which he does not want to reveal details because “it is in the making.”