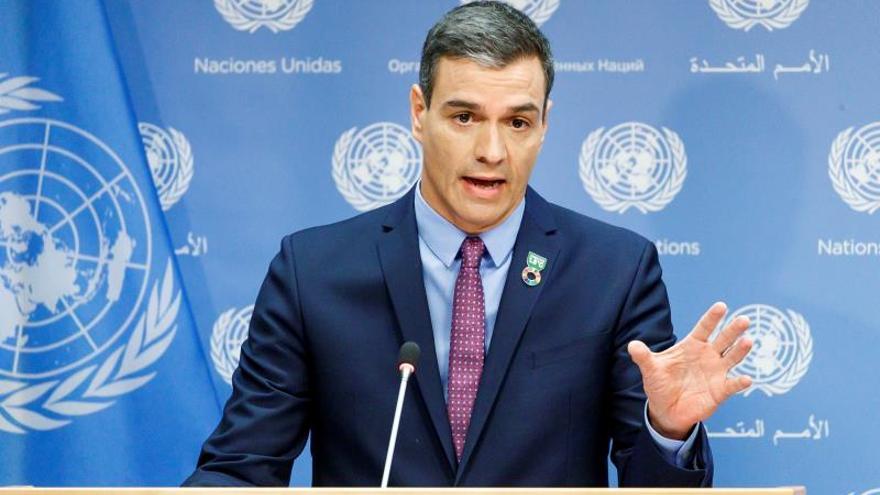 New York. 1946. The United Nations Security Council – in one of its first meetings after the creation of the UN in 1945 – meets in extraordinary session, at the request of Poland, the country whose invasion started the Second World War, with a single point on the agenda: “The question of Spain.” After a harsh round of interventions against the government installed since 1939 in Madrid – a military intervention in Spain is proposed to restore the Republic – Resolution number 4 is approved, with ten votes in favor and a single abstention, which will be followed in June issue 7, in which Spain is classified as a “threat to international Peace and Security.” In December 1946, at the request of the Security Council, the United Nations General Assembly – where all member states are represented – examines the situation and overwhelmingly agrees on Resolution 39, which literally states “In origin, nature, structure and In general, the Franco regime is a fascist regime, established largely thanks to the help received from Hitler’s Nazi Germany and Mussolini’s fascist Italy. ” The reigning hostility was such that the Spanish language, despite repeated requests from Spanish-American countries, was only included as an official language of the UN – its opponents argued that it could give encouragement to the Franco regime – after an intervention of good offices by the Republic of the Philippines against the United States. This was the infamous image (widely justified) of Franco’s Spain in the world when the United Nations was created, where it was not admitted – amid reluctance and safeguards – until well into 1955.

New York. 2020. On the 75th anniversary of the creation of the United Nations, Pedro Sánchez intervenes – by videoconference in the face of the COVID-19 epidemic – before the General Assembly with a firm and applauded speech in favor of human rights, feminism, the fighting against Climate Change and defending a global solidarity response against the coronavirus. The Spain of 2020 is undoubtedly – unlike the abysmal difference of 1946 – a respected country and a reliable partner within the international community for its unquestionable democratic values ​​and its determined commitment to Peace.

Spain – the 12th world economic power, the fourth largest economy in the European Union and the leader of an Ibero-American Community with more than 700 million citizens – now has a lot to say about the present and the future of the world’s leading multilateral organization. The excellent personal harmony between Antonio Guterres, current UN Secretary General – in his day Socialist Prime Minister of Portugal (1995-2002) – with President Pedro Sánchez has also contributed to the growing influence on the international scene of Spanish diplomacy.

Madrid has promoted important meetings during this 75th anniversary at the United Nations headquarters such as the “Pact for Refugees in Central America / Mexico” – with a very prominent role of AECID, the Spanish international cooperation agency -, the Group of Friendly Countries of the Victims of Terrorism “or the ministerial meeting of the Alliance of Civilizations, which in the hands of its new High Representative, former Spanish minister Miguel Ángel Moratinos, is gaining new momentum.

Sánchez has deployed a broad international agenda to recover the spaces that as a result of the 2008 financial crisis – aggravated by institutional instability and the repetition of elections – our country had been giving way on the global scene. After the outstanding achievements within the European Union – where Madrid has joined Berlin and Paris in the governance of the EU post-Brexit – and the recovery of dialogue with Latin American capitals, Spanish diplomacy has once again led initiatives in other areas geographical: from the Euro-Mediterranean Association with the upcoming celebration of the 25th anniversary of the Barcelona Process to a renewed relationship with China and the African Union. The success achieved by placing Josep Borrell as Vice President of the European Commission and Senior Head of Foreign Policy has strengthened Spain’s authority in different international crises in recent months, from Bolivia to Lebanon.

For decades, Spanish diplomacy has aspired to join the Security Council – the heart of the United Nations – in recognition of its weight and influence in the international arena. Spain already occupies a permanent chair in the G-20 in its own right and the possibility of joining an expanded G-8 has been raised several times – where Canada or Italy with economies slightly superior to Spain are found. Brazil, India and South Africa issued a joint statement this September urging the reform and expansion “without delay” of the UN Security Council.

The latest proposal from Latin America was presented in 2019 in New York by a delegation from the Central American Parliament – whom I had the pleasure of accompanying – to Secretary General Antonio Guterres and advocated for the incorporation of Spain and Mexico, among other nations, as new members. permanent members of the Security Council. The statement issued from Central America and the Caribbean – a region with more than 20 member states – stated that Ibero-America, as one of the main geopolitical blocs, requires a permanent presence in the Security Council.

Spain could achieve in the next Ibero-American Summit of Heads of State and Government – which will meet on April 21 and 22 in the Principality of Andorra – to add support and wills to this traditional aspiration of our diplomacy. Mexico – 2020/2021 Presidency of the Community of Latin American and Caribbean States – and a non-permanent member of the Security Council for the period 2021-2022 can be a valuable ally in this battle to ensure that Ibero-America has representation in line with its growing demographic weight , economic and political on the planet. Without a doubt, it is time for Spain to see its firm multilateral commitment and global leadership recognized with a permanent seat on the United Nations Security Council.