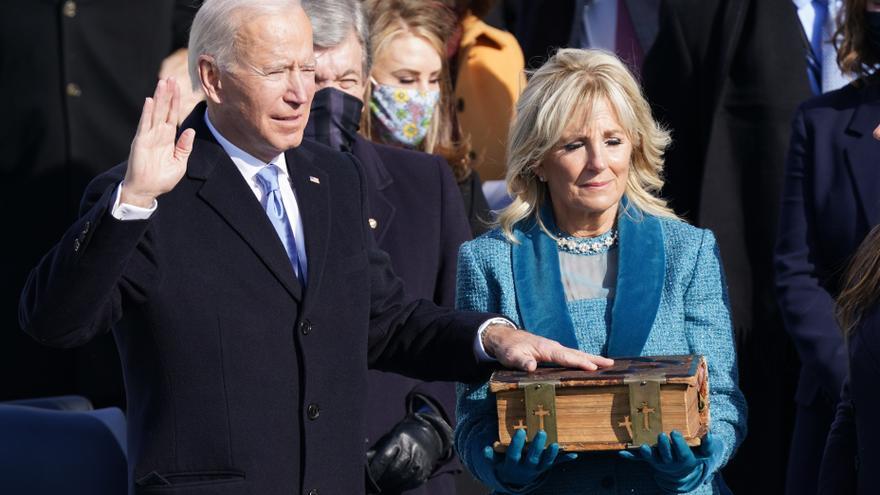 Joe biden assumed the presidency of the United States on Wednesday in a sober ceremony aimed at reaffirming the symbols of the battered democracy of the United States in contrast to the last four years and the assault on the Capitol two weeks ago. Kamala harris she became the first vice president in the history of the country, the first black and the first Indian-American to hold the position.

“Today we celebrate the triumph not of a candidate, but of a cause, the cause of democracy,” Biden said in his opening speech. “Democracy is fragile … And at this time, friends, democracy has won.”

Biden spoke these words on the same steps where two Wednesdays ago thousands of people shouted, smashed windows, waved the Confederate flag and messages in favor of Nazi concentration camps. In the same place, along with Biden and Harris, the Democratic and Republican leaders, the Supreme Court justices and representatives of all institutions celebrated the peaceful transfer of powers this Wednesday with songs of unity, peace doves and pioneer women. There was also the outgoing vice president, Mike Pence.

The new president said he had “all his soul” in seeking the unity of an aggressively divided country. “I know that talking about unity can sound like an innocent fantasy these days,” he said. “History, faith and reason show the way to unity … We have to end this uncivil war.”

Biden insisted on the value of facts. “There is truth and there are lies, lies that are told by power and money, and each of us has a duty as Americans, as citizens, as leaders, to defend the truth and defeat the lies.”

At 78, Biden has fulfilled the dream he told his girlfriend’s mother when he was in his early twenties and wanted to be president. The dream that seemed closer when he became a senator at age 29 and that has cost him three presidential races throughout a life marked by very dramatic moments.

A few minutes before noon in Washington, Biden swore in the office with his hand on the bible that has been in his family of Irish immigrants since 1893. It is the same one he has used to swear in his positions as senator and vice president.

Every detail had a special value.

Harris, a 56-year-old former senator and former California attorney general, swore with her hand on two Bibles, that of her godmother and that of the first African-American Supreme Court judge, Thurgood Marshall. He was sworn in by Sonia Sotomayor, the first Latina in the high court. Harris’s husband, Doug Emhoff, who is America’s first “second gentleman”, was holding the Bibles.

Harris arrived at the Capitol preceded by Eugene goodman, the Capitol policeman who on January 6 threw off the assailants so that they did not reach the congressmen and managed to avoid what could have been a massacre.

The ceremony was the most sober in decades, without an audience on the esplanade in front of the Capitol steps and with a small group of guests to avoid public health risks due to the pandemic and security reinforced by the danger of a terrorist attack after the assault. to the Capitol on January 6.

The esplanade was closed and both the presidential team and the mayor of Washington and the governors of neighboring states Maryland and Virginia had asked citizens not to go near the ceremony site. In total, there were just over a thousand people, a scene very different for example from the more than half a million who attended the inauguration of Barack Obama in 2009. All the people who were on stage had taken two tests in the last 72 hours to verify that they did not have coronavirus.

Instead of public, there was a display of almost 200,000 flags of the United States, its states and territories. Instead of the parade from the Capitol to the White House down Pennsylvania Avenue since 1873, virtual festivities with connections across the country. In the evening, instead of the presidential balls, a television program hosted by Tom Hanks and featuring Bruce Springsteen, Lin-Manuel Miranda, the author of the musical Hamilton, and chef José Andrés, among others.

As was customary before the previous president, the ceremony had symbolic touches of hope for the future and respect for history.

The poet Amanda Gorman, who at 22 is the youngest to have received the highest honor for a poet in the country, recited “The Hill We Climb”(“ The hill we climbed ”). Gorman made an indirect reference to the assault on the Capitol, where the mob displayed Confederate flags and other racist symbols.

“Democracy can be periodically delayed. It cannot be permanently defeated, ”he recited.

The Pledge of Allegiance was read by Andrea Hall, a firefighter from South Fulton, Georgia, and pioneer in her city.

Leo O’Donovan, a Catholic priest, and Silvester Beaman, a Methodist pastor, said the traditional prayers. The two are friends of the Biden family. The president is the second Catholic to hold the presidency of the United States (the first was John Kennedy).

Lady Gaga sang the United States anthem accompanied by the marines band and with a large brooch that represented a dove of peace. Jennifer Lopez sang This Land is Your Land and America the Beautiful, and he spoke a few words in Spanish of the pledge to the flag. The singer country Garth Brooks intoned Amazing grace.

The outgoing president decided not to go to the ceremony, something that had not happened since 1869 with the exception of Richard Nixon (although in the latter case the circumstances were different because he had just resigned and the decision was mutually agreed with his vice president Gerald Ford) . Nor was Jimmy Carter, who is 96 years old and did not want to risk traveling due to the pandemic.

But Biden was accompanied by former presidents of both parties and their wives: Barack and Michelle Obama, George W. and Laura Bush, and Bill and Hillary Clinton. The group accompanied Biden and Harris to lay a wreath on the unknown soldier’s grave in Arlington Cemetery, outside Washington.

The memory of the dead is common in a country marked by wars. What is different about this year is having to remember so many deaths from an epidemic that is still rampant in the country.

On Tuesday night, just after arriving in Washington for his inauguration, Biden attended with Harris a tribute to the 400,000 people killed by coronavirus in the United States. The president and vice president silently contemplated with their partners the fountain next to the Lincoln Memorial, illuminated by 400 lights. “To heal the wounds we must remember,” Biden said. “Sometimes it is hard to remember. But this is how wounds heal. It is important to do it as a country ”.

For Biden they have been very emotional hours. In the last hours, he has often remembered his son Beau, who inspired him in his political career and who died in 2015 of brain cancer at the age of 46. Beau was attorney general and his father envisioned him one day as the candidate. On his farewell to Willmington, the Delaware city where he has lived most of his life, he said, closing his eyes to hold back tears: “I only have one regret, that he is not here. We should be introducing him as the president. ”