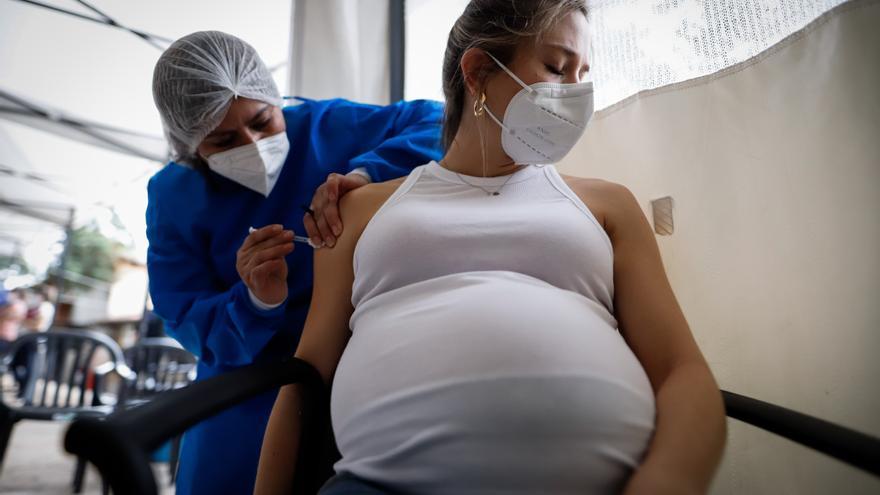 Spain has a problem with the immunization of its pregnant women. Although the population’s rejection of vaccines is minimal, the fluctuations in terms of the pairing of gestation and COVID-19 They have caused the scientific community to call for vaccination as soon as possible. The age groups that coincide with the average number of pregnancies in Spain – between 31 and 41 years – began to receive the first dose in July, but there is still all of August ahead to redirect the situation.

The urgency comes after four pregnant women have died in the past month from complications related to COVID. None were vaccinated. There have also been urgent cesarean sections due to the infections and the health authorities have asked them to go to the vaccination points as soon as possible.

The Andalusian Health Minister, the community that registered one of the deaths, made an express appeal this week. He also revealed that there is “a significant volume of pregnant women admitted” to hospitals in the region. This Friday, the Barcelona hospital Vall d’Hebrón counted 24 pregnant women admitted with nine in the ICU, so the health workers made an urgent call to get vaccinated. The Minister of Health, Carolina Darias, has spoken this week along the same lines: “We have had cases with a fatal outcome in recent days and we are concerned.” The owner admitted that, although there is no data, “we know that vaccines save lives.” But it is not that simple.

“The safety studies have not been officially completed and the technical specifications of the vaccines do not include pregnant women. That is why at the institutional level it is not easy to give an exhaustive recommendation”, acknowledges Juan Luis Delgado, president of the Spanish Society of Gynecology ( SEGO). No laboratory included pregnant women in the first clinical trials, which has caused the referrals that come from them to be limited. What does exist, and increasingly, is evidence that the risks of vaccination are low compared to the dangers of serious infection during pregnancy. Especially in a context of contagions like the current one.

“There are thousands of women who have given birth without problems around the world after receiving the vaccine,” explains the gynecologist. “That gives us peace of mind to recommend it.” So where did the confusion come from and how did it get here? “Conspiracy theories about COVID-19 and vaccines, which do a lot of damage to the networks, have been mixed with the misinformation of the health workers themselves,” admits Delgado.

“There has always been a certain stage fright in relation to pregnant women. Not only with COVID, but with any vaccine. There is a fear that they will cause disorders in the fetus on the part of the health workers and of course the mothers. It is also true that until relatively recently there were no tests in pregnant women and the regulatory bodies could not give that recommendation, “shares Amós García Rojas, president of the Spanish Association of Vaccination. For several months, however, the national strategy of the Ministry of Health endorses the use of messenger RNA vaccines (Pfizer and Moderna) in pregnant women. “We must be aware that pregnancy can be very complicated by a SARS-CoV-2 infection and it is absolutely necessary that they be vaccinated,” repeats this expert.

Update number 7 of the Health vaccination strategy recommends messenger RNA injections in pregnant or lactating women “when appropriate according to their prioritization group.” The reason is that mRNA, like Pfizer and Moderna, does not modify any genome and generates antibodies from the virus protein. “The vehicular organism disappears in a matter of hours and does not affect fetuses or mothers,” explains Delgado. The only study that appears was one conducted in the United States, called V-Safe Surveillance, which found that vaccines did not increase abortions, premature births or newborn deaths. They do not even generate different side effects from those common to the rest of the population.

From what there are no data is on the most convenient gestation week to be vaccinated. “The organogenesis of the fetus, which is when it is formed, ends after 12 or 13 weeks. The most advanced safety studies with Pfizer have been carried out with pregnant women over 24 weeks. That is why a possible recommendation is to get vaccinated in the third quarter “, comments the president of SEGO. However, in a scenario of triggered infections and in which the risk of infection increases, vaccination may be advised earlier. “We know this because there are many women who have been vaccinated while pregnant inadvertently and nothing has happened,” she recalls.

“The first thing that pregnant women have to do is isolate themselves socially, but in the summer it becomes very complicated. So, if they cannot, the priority is to get vaccinated,” he concludes. In fact, the health worker recognizes that when knowing the dangers of COVID in pregnant women, gynecological societies and associations requested that they be included among the risk groups. Something that, he criticizes, “was not taken into account by the Ministry.” “Now that in the fifth wave there have been some deaths, the situation is much more complex,” he acknowledges.

The current confusion, according to Juan Luis Delgado, was increased in May when health authorities said that COVID did not cause greater harm in pregnant women. Over time it has been seen that this has not been the case. Now the WHO asks to prioritize them in vaccination strategies, while a few months ago recommended that it be analyzed “on a case-by-case basis” before dosing.

“People who suffer from COVID have immunological, cardiovascular, thrombus and hypertension problems. What regulates all these conditions is the vascular endothelium, a fundamental organ in pregnant women,” clarifies the gynecologist. “The endothelium is critical for the lungs, but also for the placenta, because it is a purely vascular organ that is affected by COVID. We have observed that, in cases of babies who died in childbirth of asymptomatic women, the placenta was infiltrated for coronavirus, “he says.

It is not only a risk for fetuses, but also for mothers. “During the first trimester of pregnancy, the cells of the placenta have a greater number of ACE2 receptors, which are key to the entry of SARS-CoV-2 into the body”, explain in The Conversation Alejandro Orrico, responsible for clinical trials at Fsabio. Therefore, it is the period of greatest risk of infection. But in addition, a study by the CDC (Center for Disease Control and Prevention in the United States) in more than 450,000 women inferred that the 23,434 who were pregnant had a greater risk of suffering from serious disease, entering the ICU and dying.

“Messenger RNA is a very fine technology that is going to change our lives. If the health authorities had explained it well to the population, there would not be so many doubts or so many family doctors and midwives recommending pregnant women not to get vaccinated. We are seeing real nonsense. We are clear that the mRNA vaccine is safe and beneficial for the mother and the baby, “concludes Delgado.