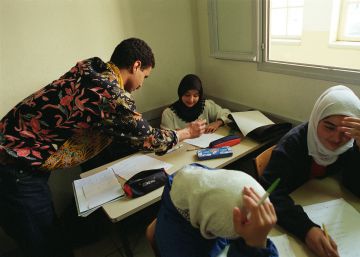 The Dutch Congress has asked the Ministry of Education for explanations about the work of the Koranic-inspired Salafist schoolsto open in the country. The Nieuwsuur program of public television and the newspaper NRC Handelsblad They have found that at least 50 informal premises of this class, with more than a thousand children targeted, are educated in the belief that "there are enemies and infidels." They learn that "apostates, homosexuals or adulterers deserve the death penalty," and that "Muslim youth must reject the principle of equality and freedom." He Council of Moroccan Mosques rejects these teachings, and the liberals of the right and Unión Cristiana, part of the center-right coalition in power, want to change the law so that inspectors go to unofficial centers.

Seeing that they were not treated otherwise, reporters from both Dutch media pretended to be parents to get the teaching material of a group of mosques influenced by Salafism. In this way, they found that in some people even young people were encouraged "to emigrate from this land of non-believers to settle in a Muslim country." In 2018, the same newspaper uncovered the existence of secret reports held by the Government, which numbered about thirty Dutch Islamic organizations receiving millions of euros in funds remitted by Saudi Arabia and Kuwait. Overall, 10% of all mosques in the country (there are about 500) had requested such external subsidies. Parliament then complained to the Executive that he had hidden the data from both Arab states, given the penetration of Salafism that this could mean.

In February 2019, the office of the National Coordinator of the Anti-Terror Fight confirmed in a study posted on its website "the increase in the influence of political salafism in the Netherlands, which reinforces the Islamic identity of Muslim youth through teaching, to create an alternative social structure outside the legal order of democracy. " In April, the annual report of the secret services (AIVD) noted "the dissemination of the ideas of this orthodox movement in education, with preachers who reach children in mosques and barium premises, and can be a breeding ground for violent jihadism, "said Dick Schoof, general director of AIVD. Terrorist experts found "the glorification of the sharia " in his study of 2019. In the preaching of the Koranic schools analyzed now, children, among other exercises, are proposed to point out "the appropriate punishment for each crime: whipping, stoning or beheading."