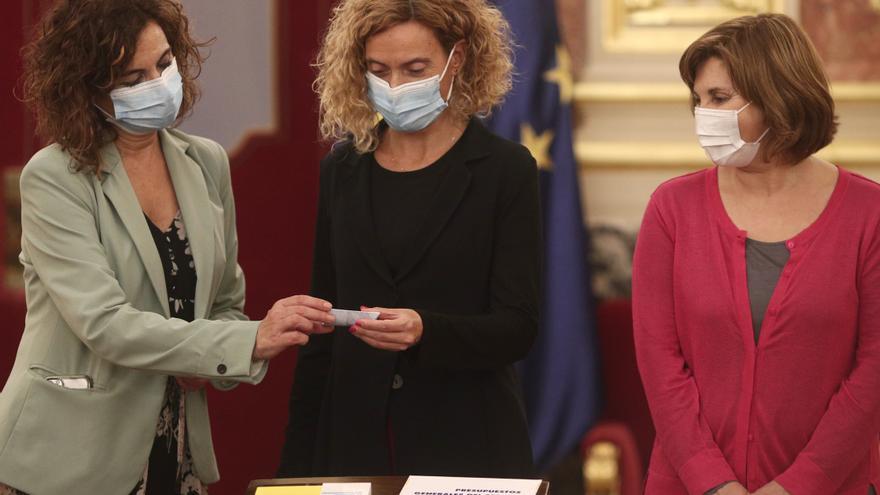 Popular Party, Vox, the four deputies from Junts -and not the four from PDeCat-, BNG, Foro, Coalición Canaria and the CUP plan to present their respective amendments in full to the General State Budgets proposed by the Government to try to overturn the accounts of Pedro Sánchez’s team in the Congress of Deputies.

The leader of the PP, Pablo Casado, plans to announce this Friday his intention to break any option in agreement with the Government on budgetary matters with the presentation of his amendment, as popular sources have confirmed to elDiario.es. Until this Friday, the conservatives had been willing to talk about the Budgets although for this they demanded the Government a complete change in its economic policy, asking it to renounce the increase in taxes on the highest incomes or claiming to reduce the taxes provided for products such as sugary soft drinks or diesel.

At the end of October, as soon as the government’s draft was known, the PP asked the Executive to “rectify” its economic policy, tell “the truth to the Spanish and take the outstretched hand of the PP to carry out the economic policy it needs” the country. “The position of the PP has been consistent and clear. We do not want to raise taxes but we want to lower them. We do not want to increase bureaucratic burdens, we want to reduce them. We want to improve competitiveness,” they said from Casado’s management, before emphasizing that the popular ones consider that the tax increases are “bad for Spain”.

Casado himself has expressed in recent days his rejection of the Government Budget project because, as he explains, “billions of taxes are raised on the middle classes”, due to the taxes imposed on fuels or soft drinks, despite the fact that directly the accounts only contemplate these increases for people with incomes greater than 200,000 euros per year.

“The PGE of Sánchez and Iglesias are the last straw for the economy. They are the only ones in the EU that raise billions of taxes to the middle classes (diesel, plastics, soft drinks …) Just the day the destruction of 700,000 jobs this year (not counting 700,000 ERTE), “Casado wrote on his personal Twitter account on October 27.

“Touch of attention” by JxCat and BNG

On the part of Vox, it was the general secretary of its parliamentary group, Macarena Olona, ​​who announced yesterday the presentation of the amendment to all the accounts of the Executive. In the case of Junts, the amendment to the totality represents a step that, according to the spokesperson for the formation in the Congress of Deputies, Laura Borràs, does not imply an advance of a negative vote to the public accounts that are voted in the Chamber low but “a touch of attention” of all the things that could be improved in the draft presented by the coalition government.

In an appearance on Thursday, Borràs made it clear that there will be no room for understanding if the situation of the imprisoned politicians is not negotiated. The amendment to the whole will be defended, in any case, only by the four deputies of the Junts and not by the whole of JxCat, among which are included another four deputies, of the PDeCat, who will not support the withdrawal of the accounts.

The CUP, for its part, announced this Friday that it has submitted an amendment to the entire budget bill because it considers that “they do not respond to the real needs of the population at an extraordinary time such as the current economic and social crisis. “. In a statement, he maintained that “without a courageous redistributive policy in relation to taxation, and not only cosmetic measures such as those being carried out by the PSOE Government and United We Can, there will not be enough income to alleviate the social crisis.” and he has criticized that the fiscal measures contemplated by the PGEs do not affect even the richest 1% of the population.

The BNG also announced this Friday its intention to amend the Government Budgets, but has advanced that it does so as a “wake-up call” to the Government and has shown its willingness to withdraw it “if there is movement” by the Executive. The deputy of the Galician formation, Néstor Rego, has assured in a press conference that for the moment the Coalition Executive “does not have the disposition to negotiate or to modify its forecasts” in the games dedicated to Galicia and other demands of its formation .

“It is a wake-up call for him to treat our country with justice,” said the Galician nationalist, saying that “in no way” can the BNG support accounts that, in his opinion, “harm and discriminate against Galicians.” In any case, it has clarified that “it is not an amendment that preludes the negative vote to the definitive vote” of the Budgets, which next week will be submitted for full debate.

The position of ERC and EH Bildu

Neither ERC nor EH Bildu will present amendments to the entire government accounts, as announced this Friday by both pro-independence formations, which paves the way for their approval in Congress in the coming weeks. “We cannot afford to say ‘no to everything’. It is surely the easiest position, but not the one needed by the citizens of Catalonia, our companies and our social fabric. For this reason, Esquerra Republicana will not present an amendment to the totality of the General State Budgets “, ERC has assured in a note, sent this morning to the media.

“We are in a very delicate social and economic moment, both in Catalonia and in the State”, justifies ERC in its statement. A delegation from the Republican party met with the Government on Thursday in a round of contacts that allowed the Executive to verify that the Budget project will far exceed the whole debate, the first necessary parliamentary procedure. “The global pandemic of the coronavirus is compromising our health system and causing a serious social impact, stopping the economy and increasing all public expenses to be able to face it. Faced with this situation, block the General State Budgets, which are also an urgent need for the group of Catalans and Catalans, it would be a serious irresponsibility “, says ERC.

The party maintains, yes, that “the current budget proposal must improve” and that it is “very far from being able to support them.” “Today what we are simply doing is not blocking its processing, and it must be the Government who seeks its support to end up approving it,” the statement concluded.