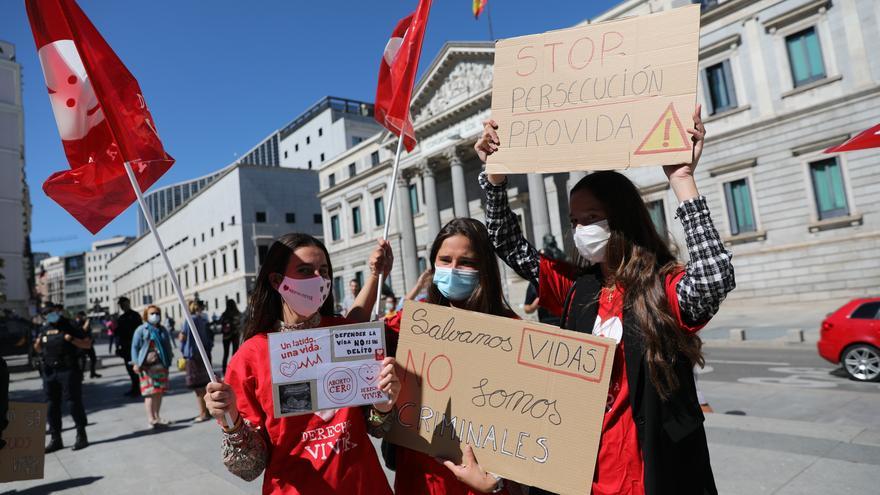 The Popular Party and Vox will try this week to paralyze the reform that aims to bring a specific crime to the Penal Code to punish those who “harass or coerce” women who go to clinics for abortions. The bill, presented by the PSOE, began its parliamentary path last september, but this Thursday the Congress votes the amendments to the totality presented by the rights. Both texts defend that the initiative “criminalizes” the rights of “those who think and believe differently” and that there are already tools to prosecute harassment, and frame the activity of ultra-Catholics at the gates of the centers in a “work of information and support “.

The foreseeable thing is that the amendments will be rejected by the plenary session; in fact, both were the only formations that opposed the consideration of the reform in a session in which a far-right deputy called a socialist a “witch”. The matter has entered Congress for the first time with the aim of trying to put an end to the obstruction of abortion carried out in different Spanish cities by anti-election groups that are located in the vicinity of the concerted clinics, where they are carried out. 85% of voluntary terminations of pregnancy.

The rights display in their texts the argument that in recent months different associations and ultra-conservative groups have raised. For the Popular Party, the rule “proposes to criminalize the right to freedom of expression or assembly of people who think and believe differently from the proponents” and seeks “to penalize these volunteers whose function is to inform, attend etc. and what if in some assumption they incur in actions of harassment or harassment, the Forces and Bodies of Security of the State and the judicial organs have sufficient capacity to confront “.

The proposal contemplates prison sentences of three months to a year or work for the benefit of the community for those who “restrict or harass the freedom of a woman who intends to exercise her right to voluntary interruption of pregnancy, promoting, favoring or participating in concentrations in the vicinity of authorized places, causing an impairment in their freedom or privacy “.

The idea is that the precept, which like any other crime must be proven by the courts, serves to curb the impunity with which these groups have been acting for years, settling for hours in the vicinity of the clinics to persuade women who have already made the decision not to abort.

To do this, they deploy a battery of actions: from praying or displaying anti-abortion banners to reprimanding and addressing them, giving them toy fetuses or brochures with biased and blaming messages. At the Dator clinic, in Madrid, one of the most pressured, every Saturday an ambulance stands at the gates to perform ultrasounds on women and thus try to dissuade them. Every time a woman backs up and does not enter the clinic, these groups boast that they have “saved a life.”

Far from recognizing that there is a problem, that other countries have legislated in this regard and that even the Ombudsman has asked the administrations that guarantee that these women exercise their right in freedom, the popular ones insist that it is an “unnecessary” reform that supposes “a sectarian use of the institutions”, does not comply with the legal system, and is “guided by the spirit of confrontation “. As an alternative text, what the amendment proposes is to leave the Penal Code and specifically Article 172, that of coercion, as it is.

Vox goes even further, which uses the amendment to the totality to propose the reform of this crime, but in a very different sense: displaying the denial of sexist violence that characterizes training, it intends to eliminate the precepts that slightly increase the penalty in the event that they occur due to gender violence, that is, it calls for an end to specific penalties because they imply “the criminalization of men operated by” gender “legislation. However, the Constitutional Court already endorsed them in 2008 by ensuring that in a context of sexist violence they are behaviors that “reproduce inequality” between men and women.

The extreme right, like the popular ones, argue in the text that the reform proposed by the PSOE supposes the “censorship of the freedom of assembly, expression and ideology of all those people whose thought and speech about the classification of abortion differs” from the proponents. In fact, they equate abortion in the text “to the end of the life of the unborn,” they criticize the Abortion Law passed in 2010 and even deny that sexual and reproductive rights exist.

The extreme right also reduces the activity of these groups and defends that it serves so that pregnant women “receive more information” to “ensure greater knowledge” of abortion, ignoring that the law already requires administrations to inform and that the brochures that They give the doors of the cynics contain biased or false information. “The creation of a new criminal offense to repress the conduct of those who peacefully go to the vicinity of abortion centers to offer prayers, help and assistance of various kinds to the women who come there would imply an unjustified restriction of fundamental rights and freedoms” , says the amendment.

Another argument used by the rights is that “there are already more than enough tools” to respond to harassment or coercion. And it is true that the Criminal Code already incorporates these crimes, but according to the Association of Clinics for the Voluntary Interruption of Pregnancy (ACAI) they have not served to put an end to these activities. In fact, the Ombudsman asked the Government more than a year ago to protect “the physical and moral integrity and free movement of women” who go to clinics and meet pro-life workers, without “damaging fundamental rights and freedoms. of other citizens “.

The PP reiterates that coercion is already included in the criminal law, but recognizes at the same time that “if it does not adequately protect this type of conduct”, as the Association of Clinics for the Voluntary Interruption of Pregnancy (ACAI) denounces, “¿¿ why not regulate a specific type for those who suffer harassment due to their political affiliation, or those who want to use the official language of our country in their jobs or businesses without being threatened, “he compares.

The PSOE’s proposal will go ahead, but not without criticism from the rest of the parties that did support the consideration, who called for improvement during the process. Several called for the proposal to be more ambitious and addressed within the framework of the abortion law reform, something in which the Ministry of Equality is already immersed, which has promised to do it in the style of other countries. In France, for example, the formula chosen has been that of criminalization, in others such as the United Kingdom it has been decided to establish ‘safety zones’ around clinics, that is, a minimum distance in which there can be no demonstrations or activities of this type.

There is consensus among associations and experts on the need to protect access to abortion, but there are some doubts that criminal proceedings are the most effective. From ACAI, in fact, they have spoken on several occasions in favor of ‘security zones’, a “faster and more efficient” method.