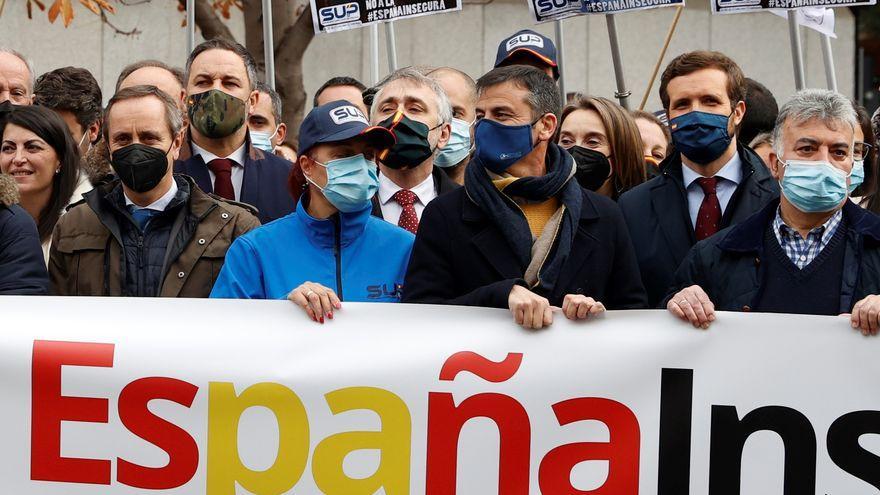 Three weeks after the Ministry of the Interior published the latest data that put crime at its lowest level Since the statistics were created, the Popular Party and Vox will take to the streets on Saturday to say "no to citizen insecurity." The changes that the amendments agreed to by the two government partners, PSOE and United Podemos, will introduce in the organic law known as the 'Gag Law', have roused the police unions, a traditionally conservative field that has been radicalized in recent years with the the irruption of Jusapol, a platform that took advantage of the sovereign challenge in Catalonia to demand, with an unusual aggressiveness in a claim by agents of authority, charge the same as the Mossos d'Esquadra.

In recent days, those responsible for the Popular Party and Vox have been tracing in their statements the positions of Jusapol and the rest of the unions against the PSOE and UP amendments, despite the fact that the agreed text does not coincide with what the union representatives assure of the Police and the Civil Guard that says. This same Wednesday, the leader of the PP, Pablo Casado, declared that the police will have to "take the criminals who were stoning them, as if they were public transport, to return them to the places where they were carrying out the attacks."

This statement, one of the interpretations of the amendments agreed by the Government partners, is linked to the union protest that ensures that the police are going to become "taxi drivers for criminals." The police do not apply the Citizen Security Law to an individual suspected of having tried to attack an agent with stones, but rather the Penal Code, given the possibility that he has committed a serious crime such as an attack on authority.

The reform of the Citizen Security Law establishes the possibility that, once someone has been identified in the police station who does not carry the documentation or refuses to provide it to the agents, they will be returned by them, if they have not found a reason to put it in judicial disposition, to the place where he was intercepted, but provided that he had been taken to the police station in another locality and if the incidence of police work allows it.

The spokeswoman for the Popular Party in the Interior Committee of the Congress, Ana Vázquez, came to affirm this Wednesday that the attacker of a policeman will pay his responsibility by paying a fine of "30 euros." As his head of ranks confused the Criminal Code with the Citizen Security Law, which does not contemplate fines of 30 euros not even for his minor offenses, which in a minor degree are punished with 100 euros.

The struggle of PP and Vox to capitalize on the discomfort of the members of the Security Forces, and of the entire electorate that prioritizes the "strong hand" in one of the European countries with the lowest crime rate led, to its leaders to fully agree that the Government reforms the Citizen Security Law, electoral commitment of PSOE and Unidad Podemos, because they are paving the way for the protagonists of the "riots" when they are in the opposition and, consequently, govern the party of Casado, that of Abascal, or a coalition of both.

Another full coincidence in the statements made this Wednesday by the leaders of PP and PSOE when attending the concentration before the Government Delegation in Madrid was the appeal to the Constitutional Court. Casado took it for granted that his party will bring the reform to the body that interprets the fundamental rule and Santiago Abascal, president of Vox, raised it as a possibility. If the Court has not resolved before the PP returns to the Government, Casado said, the Government will "roll back this reform that only benefits the radical partners of the Government."

The Constitutional Court ruled on the Organic Law of Security and Citizen Protection approved with the absolute majority of Mariano Rajoy just a year ago. The magistrates of the TC endorsed the fundamental aspects of the Law, but declared unconstitutional the infraction referring to recording the performance of the police in the streets. The Government partners have wanted to transfer the Constitutional ruling to the reform of the Law, but this has roused the police unions and, by extension, PP and Vox. Constitutional Court sources explain to elDiario.es that there is an appeal against the text that comes out of the reform, but that does not mean that they will return to pronounce on an aspect of the Law on which they have already deliberated and failed.

"It is a law to protect criminals and give them all the legal tools," Santiago Abascal told the media. The Vox leader agreed with Abascal in ignoring the electoral commitment of PSOE and United We Can with the reform of the Citizen Security Law and assured that what he intends is to "prepare the ground for when he loses the elections, to be able to set fire, through his henchmen, with total impunity. ”For his part, the deputy spokesman for Ciudadanos in Congress, Edmundo Bal, has said that the reform sends the following message to citizens:“ Your police will not take care of you, they distrust your police ".

Next Saturday, at 11:30 a.m. at Puerta del Sol, Jusapol has summoned "all civil society" to demonstrate against what they say the amendments to the Citizen Security Law proposed by PSOE and Unidad Podemos say. Vox has confirmed the presence of its secretary general, Javier Ortega-Smith, and his parliamentary spokesman, Macarena Olona, ​​and the party leader, Santiago Abascal, is pending confirmation. For the PP, Pablo Casado will participate in the concentration, as well as the president of the Community of Madrid, Isabel Díaz Ayuso, and the mayor of Madrid, José Luis Martínez Almeida. Citizens will also have representation in the protest.