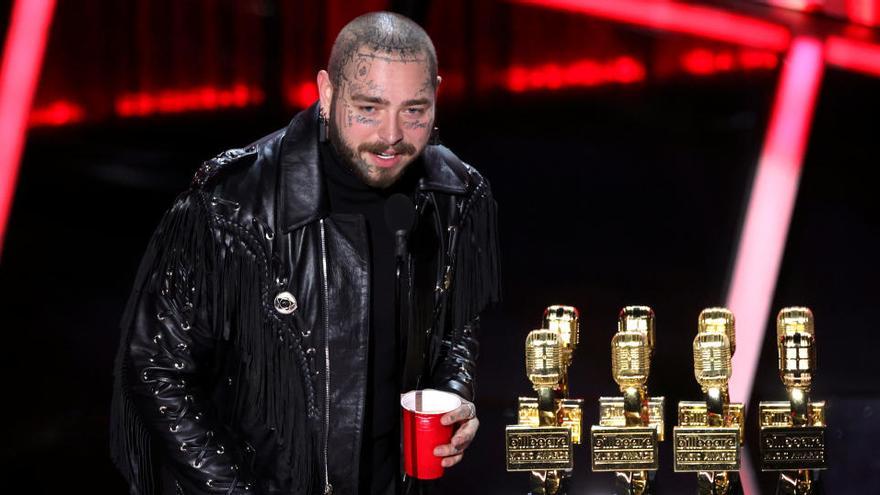 Post malone, with nine awards, swept the Billboard Music Awards, the first grand awards gala held on a physical stage since the beginning of the pandemic in which they also triumphed Billie eilish and the Puerto Rican Bad bunny.

The mythical Dolby Theater in Los Angeles (USA), the annual home of the Oscars, was prepared to organize a live gala, with performances and guests but without publicor, in a new attempt to adapt the great events of the entertainment world to the pandemic of the new coronavirus.

After some Emmy awards that brought the cameras to the winners’ homes, the ceremony brought together a good number of artists on the same stage, from Alicia Keys to John Legend, to celebrate the awards given by the institution that measures the commercial performance of music in the United States.

Unlike the GrammyVoted by industry experts, the Billboard Awards recognize the best sellers of the year.

After signing one of the best-selling albums of the last year, “Hollywood’s Bleeding”, and despite being ignored at the Grammys, Post Malone swept the Billboard awards by taking the most important award of the night, the best artist, along with eight other statuettes.

“Honestly, I am impressed by the love that everyone shows me,” said the artist at the end of the night, when the host of the event, Kelly Clarkson, appeared with a cart carrying all the awards.

Malone beat the other winner, Billie eilish, the 18-year-old who made history earlier this year by winning all four of the Grammys. “Please vote and wear a mask. Take care,” he said on stage, wearing a mask, after taking the award to the Best Female Artist, New Artist, and Most Successful Album for his acclaimed “When We All Fall Asleep, Where Do We Go?”

With her double triumph at the Billboard and the Grammys, the “Bad Guy” singer is confirmed as a voice capable of uniting commercial success with critical acclaim.

In the social section, South Koreans BTS were the most voted artists by fan bases, while Lizzo was crowned the best-selling author and Lil Nas X and Billy Ray Cyrus signed the most-played song of the season.

The “country” musician Garth Brooks rreceived an honorary award for his career.

For its part, Bad Bunny won among Latin artists, ahead of Anuel AA, J Balvin, Ozuna and Romeo Santos. “Enough of sexist violence, let’s educate now in the present for a better future, “said the Puerto Rican in Spanish on stage.

“I am not a social message artist, this song is not social message, but let’s learn that You can dog, be polite and respectful at the same time. If she doesn’t want to dance with you, respect. She perrea alone, “he said after performing his hit” Yo Perreo Sola “with Ivy Qeen and Nesi.

Outside of the ceremony, the organization proclaimed J Balvin and Bad Bunny as winners of the best Latin album for “Oasis”. Maluma, Farruko, Romeo Santos and Sech were the other nominees in the category.

The most exciting moment of the night was the performance that John Legend dedicated to his wife, Chrissy teigen, just two weeks after the couple lost their future child after a abortion.

“This is for Chrissy: We have something good, darling. As long as life is tough. We will never lose our way. Because we both know who we are,” he said before performing the ballad “Never Break” on the piano.

A gala without an audience and cold

The experiment of the ceremony, on a large stage but without an audience, demonstrated how cold the broadcasts without an audience live on television are, despite whats prerecorded applause and from the euphoria of the participants there were moments of silence.

Only the petitions to vote, when there are 20 days until the elections from the US, raised the intensity of the gala. Especially insistent was Lizzo, with a dress that had the word “VOTE” printed several times: “Use your voice, your vote and do not reject your power,” he insisted.