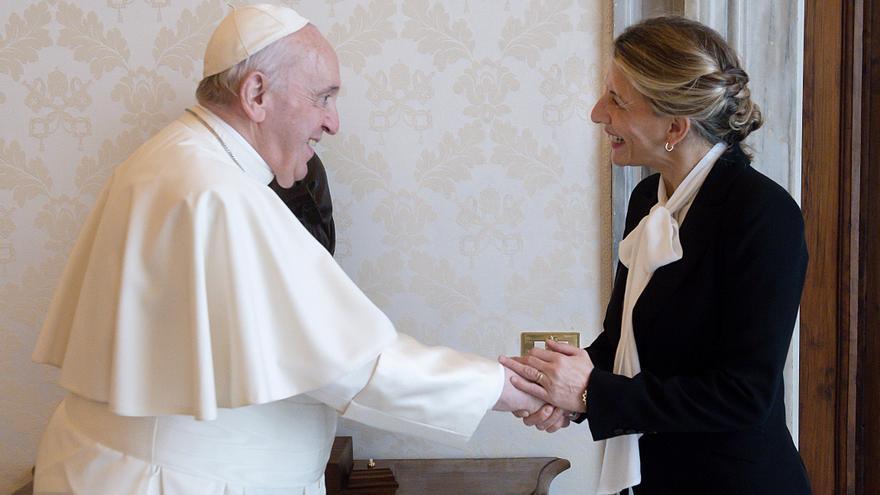 Francisco will not come to Spain this year. As elDiario.es has been able to confirm officially, the option of a papal visit to Compostela in August has vanished. At the moment, the Secretary of State is only working on two trips: the one already announced to Malta for April, and another in July to Africa, predictably Congo.

Much had been speculated about the possibility that Bergoglio would arrive in Spain this year, either in Compostela or Manresa. For months, the pressure for Francis to visit our country was tremendous. In September, in an interview with Carlos Herrera on Cadena Cope, the Pope showed his interest in going to Santiago – which is experiencing a particular double Jacobean Year – to close the European Youth Meeting on August 7 and 8, although leaving clear that "it would be a visit to Compostela, not a visit to Spain". Finally, it will not happen either.

Why doesn't Francisco come to Spain? As confirmed by Vatican sources, Bergoglio has decided to decline the invitation to Compostela for various reasons. In the first place, because his initial intention – a merely pastoral visit, lasting three hours, to be with young people – would not be feasible: at least he would have to meet with three public institutions: the King, the President of the Government, and the President of the Xunta. The experience of his visit to Budapest (also planned to close the International Eucharistic Congress, but which everyone remembered because of his meeting with Viktor Orbán) was very revealing for the refusal to do the same in Santiago, according to Vatican sources.

Secondly, the political polarization in Spain, which would cause the papal trip to be interpreted by the different sectors in a partisan key. At a time when Church-Government relations have intensified on account of registrations, the payment of the IBI or pederasty, a visit from Francis would undoubtedly be used.

Finally, another reason that has led the Secretary of State to exclude Spain from the papal agenda is the issue of sexual abuse. In the Holy See – not in Pope Francis, according to these sources – there is a well-founded fear that our country will become "a new Chile", and that the victims of abuse may feel neglected in the event that Bergoglio visits Spain and not meet with them.

In some ecclesiastical sectors, in addition, the theory abounds that a protest by the victims during the papal visit would have an international echo, which would force Rome to make an "intervention" of the Episcopal Conference, in the style of what happened in Chile. At a time of deep division in the Spanish Church over how to proceed regarding abuses, the papal visit would not be well received, either, among the Spanish bishops.