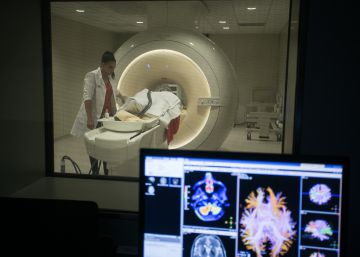 The sleepless nights take their toll on the brain. More than it seems. Apart from fatigue or lack of concentration the day after, cognitive performance can suffer in the long term and more severely. A study of the Pasqual Maragall Foundation, specialized in Alzheimer’s research, has found changes in brain structure that suggest a link between insomnia and the development of this neurodegenerative disease. Research, conducted with healthy people, has found that people with insomnia have changes in some areas of the brain that are also affected in the early stages of Alzheimer’s. Brain damage in This neurological ailment starts long before the patient develops the first symptoms.

It is not the first time that sleep disorders are related to a high risk of dementia. A multicenter study published in 2018 in the magazine Alzheimer’s & Dementia I already pointed out that middle-aged insomnia is associated with an increased risk of this type of neurodegenerative ailments. The Pasqual Maragall Foundation research, conducted among 1,683 healthy people – 615 with insomnia – and published in the magazine Alzheimer’s Research and Therapy, notes that those participants with sleep disorders had a lower volume in brain regions such as the precutaneous or posterior cingulate cortex. “They are areas that participate in networks that work on the functioning of memory, performance … In these areas is where neurological damage accumulates in the early stages of Alzheimer’s. Here pIt may be that they are accumulating damage or that they already have less volume“, explains Oscar Grau, first signatory of the study.

In addition, research has found changes in the white matter of the brain – where are the axons, the wires that connect some neurons with others. “We know that a disruption of this substance can have an effect on cognition. The profile of changes we have found might suggest that there is a type of inflammation linked to insomnia. What we do not know is what is the role of inflammation,” he says. Grau The researchers also found that the effects of insomnia are enhanced in the carriers of the genetic variant APOE-ε4 – which confers a higher risk of Alzheimer’s disease. “The conclusion is that, although the magnitude of the effect is small, this study provides evidence that there is a link between insomnia and Alzheimer’s risk: people with insomnia reflect changes related to this disease, “concludes Grau.

In line with the Pasqual Maragall Foundation study, Swedish researchers have discovered that, after subjecting healthy young men to a sleepless night, the blood levels of the TAU protein –a biomarker of Alzheimer’s– They are taller. The accumulation of this protein, which is responsible for stabilizing and helping to assemble the skeleton of neurons, is one of the biological signals that appear in the brains of people with Alzheimer’s. Tau is, together with the beta-amyloid protein, the neurological damage alert due to this degenerative disease.

The Swedish study, published in the scientific journal Neurology, also gathered 15 healthy men about 22 years on average and without sleep disorders. In a first phase, they were allowed to sleep normally for two nights; In the second part of the investigation, they were allowed to sleep well one night and deprived of sleep in the second. Blood tau levels increased by 17% after that night of lack of sleep compared to 2% on a normal night’s sleep. “Our study suggests that acute sleep loss causes an increase in tau blood levels. These changes provide additional evidence that sleep loss can have detrimental effects on brain health, even in younger individuals,” they conclude. The researchers

The finding advances along the lines of other studies that have already found, in cerebrospinal fluid, an increase in tau and beta-amyloid proteins during acute sleep deprivation. A study published in Annals of Neurology in 2018 He already noted that sleep deprivation increased beta amyloid levels between 25% and 30%.

“Insomnia is a risk factor. It does not cause, per se, Alzheimer’s, but the risk of dementia increases, “says neurologist Albert Lleó

“Insomnia is a risk factor. It does not cause, per seAlzheimer’s, but increases the risk of dementia. But the mechanisms are not clear. What we know is that during the night, the brain takes advantage to eliminate waste proteins, “says Albert Lleó, Director of the Memory Unit of the Neurology Service of Hospital SAnt Pau from Barcelona. On the two published studies, in which Lleó has not participated, the neurologist believes that both “demonstrate that insomnia produces biological alterations, one at the level of brain structure and the other through blood tests.” However, the doctor clarifies that “for these alterations to be relevant, sleep disorders have to last for many years and also depends on their intensity.” The Lleó team has participated in studies where they found that Sleep disturbance is very common in people with Down syndrome, a group especially vulnerable to Alzheimer’s disease – 70% at age 60 suffer from this ailment.

The scientific community knows that while sleep is activated mechanisms that help clean up brain metabolism waste, when you are awake, increases the production of beta-amyloid and tau. However, the researchers agree that many questions remain unanswered, such as the actual level of influence of sleep disorders, the role of inflammation in the insomnia-Alzheimer’s association and the direct action of these proteins. “Experience tells us that accumulating tau in the brain is not good. In neurological disease, we accumulate tau as neuronal damage. The study published in Neurology They are 20 years old and we don’t know what that tau means. We need to understand the physiology of these proteins and the changes they experience in sleep-wakefulness, “says Grau.