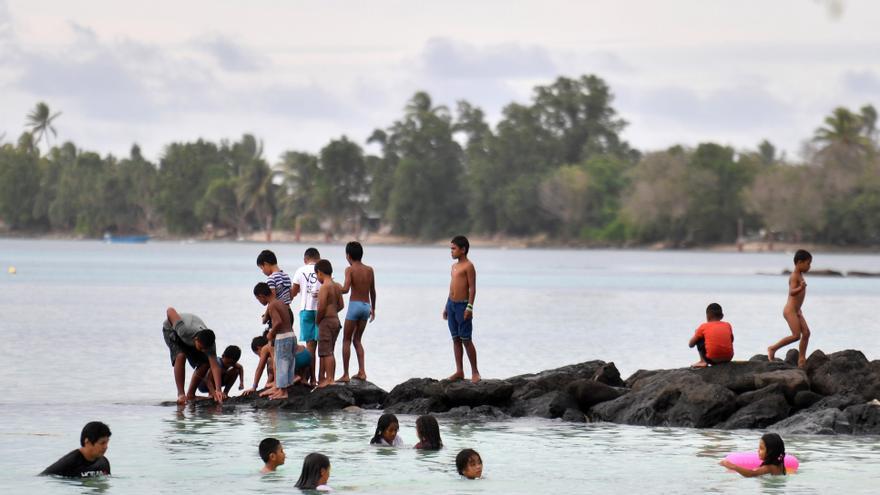 It seems that impoverished countries are fed up with enduring the consequences of a climate crisis to which they have historically contributed little. A good part of these states are determined to make things difficult for the rich countries at the Glasgow climate summit and more after seeing that the preliminary text moves away their requests for financial support to, at least, compensate for the already inevitable damages of climate change.

The president of the COP, Alok Sharma, insistently repeats in Glasgow that he intends to leave the conference “with the objective of 1.5ºC within reach”, with this he means that the increase in global temperature is not greater than that figure with respect to at pre-industrial levels. Although this extra heat limit is “imperative”, for impoverished countries “this level of global warming already produces great losses and damages,” explains Eddy Pérez, of the Climate Action Network. Pérez points out that “these vulnerable countries cannot be asked to make more efforts to maintain 1.5ºC without guaranteeing support.” Support is money.

The beads can be set as desired, but, in the end, the richest 1% of the planet releases more greenhouse gases into the atmosphere than 50% more poor. In 2020, in Africa, CO2 emissions per inhabitant were 0.99 tons and in South America 2.22 tons. Both regions number 1.7 billion people. Even Asia, where there are two of the most polluting countries, China and India, which have 2.7 billion inhabitants, emitted 4.3 tons per person (the continent reaches 4.5 billion lives).

North America almost triples that amount: 11.2 tons per human. Europe is at 6.6 tons. Furthermore, historically, the CO2 released by the United Kingdom, the United States and the countries of the European Union since 1850 illustrates the accumulation of responsibility in the deterioration of the climate by human cause.

“Developing countries do not want to continue paying for the damage of the climate crisis,” says Yanide Dagnet of the World Resources Institute. These countries have put figures to their needs: 1.3 trillion dollars a year from 2025. “Reliable and adequate financing is a precondition for vulnerable countries to increase their objectives” to fight climate change, explained the negotiator. from Guinea, Ahmadou Sebory, speaking on behalf of the alliance of 77 developing states plus China.

Will they dare to block an agreement? “Normally these countries are not heard outside these rooms, but here they are and it is a matter of life and death for them,” explains analyst Jennifer Tollman. Because, in the way the UN works, any country can block a declaration that is approved by consensus.

At the political leaders’ day on November 1, Tuvalu Foreign Minister Simon Kofe wanted to represent “real life situations due to the impacts of climate change” by deliver your message on a lectern with sea water up to your knees. This Pacific island country has a maximum elevation of 4.6 meters.

Excluding the longer-term effects of drought, lack of food or air pollution, the countries most affected by extreme weather events linked to climate change between 2000 and 2019 have been Puerto Rico, Myanmar, Haiti, the Philippines, Mozambique, Bahamas, Bangladesh, Pakistan, Thailand and Nepal, according to the index of the German Watch organization that combines the loss of life and economic that the countries bear.

This July, the largest study on deaths caused by climate change attributed five million deaths a year to abnormally high or low temperatures between 2000 and 2019. The international work coordinated by Monash University and published in The Lancet thus distributed deaths: 50% occur in Asia and 24% in Africa.

But this Wednesday what these countries have seen is that the money committed in Paris, 100,000 million dollars a year, is not yet there. And it should have been in 2020. “We emphasize the need to achieve the Paris objectives”, is the text that is being worked on. The document moves away from dedicating that specific fund to compensate for damages and losses. India is the negotiator that has taken up that flag.

The scenarios that can be considered vary from the fact that there are countries that do not participate in the final session of the COP, which does not prevent an agreement from being reached because there is consensus among those who are in the plenary session, until the dissatisfied attendees prevent a final hammer blow. They can also punctuate that session of protest interventions, not blocking, that deteriorate the final result of the summit. They could also add a final attached statement that was not included in the official agreement.

“In a planet where millions of people suffer the consequences of climate change, it is urgent to give a collective response to the damage caused by the continuous burning of fossil fuels,” summarizes Javier Andaluz, observer at the COP for Ecologists in Action. “The countries of the global North must assume the collective responsibility of providing the necessary resources.”

This Wednesday the president of the COP was asked what he would say to a 12-year-old girl named CJ who lives in Micronesia, “the front line of climate change.” Alok Sharma has responded that “my message to her and to anyone living on that front is that we are fighting tooth and nail to make sure we get an ambitious result. And so I remind ministers that their statements on ambition must be translated. in shares “.