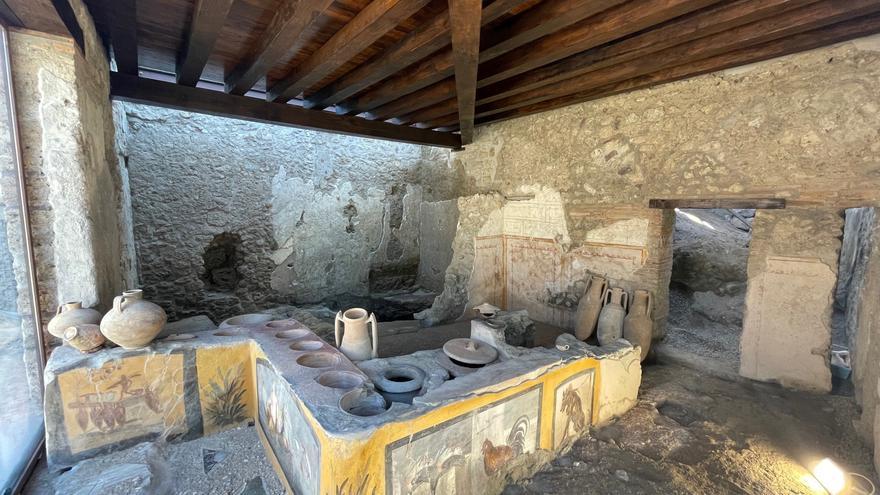 Rome, Aug 6 (EFE) .- The archaeological area of ​​Pompeii, the southern Italian city destroyed in 79 AD. due to the eruption of Vesuvius, today presented one of the findings of its latest excavations: a thermopoly, the place where food and drink were served to the inhabitants, which stands out for its “exceptional decoration” and the remains of food that were still found in its interior, and that can be visited from August 12.

Although some eighty thermopolies have been located in Pompeii, the latter is part of the new excavations being carried out in Regio V of the area and has impressive decorations in a good state of conservation that represent images of a marine nymph on the back of a hippocampus and “animals that were probably prepared and sold on the premises.”

Thermopolies, restaurants where hot meals and drinks were sold, “were widespread in the Roman world, where it was customary for the middle and lower classes to eat outside the home.”

This space, which visitors will be able to visit from next August 12, was discovered in some first interventions in 2019- Later they were completed in 2020, given the exceptional nature of its drawings, to restore the atmosphere and the decorative elements present.

It was the custom of the Pompeians to consume hot food and drinks in the open air, and archaeologists and experts working in the archaeological park have been studying the material for months to see how this discovery can expand the knowledge about the eating habits of Roman times.

Among the conservation works of the thermopoly, a new wooden cover has been made to protect the painted counter, and the old cantilever has been remodeled, on which part of the original pavement found during the excavation has been placed.

Along with the new visit of the thermopoly, others have been planned to the area of ​​Orione’s house, near the new discovery, where work is also being done on restoration and protection of the remains.