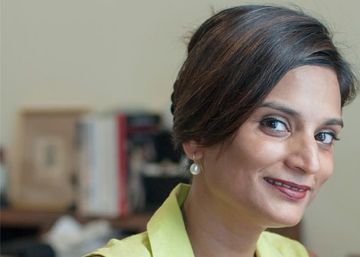 Indian writer Pallavi Aiyar grew up in New Delhi and for 15 years was a correspondent in Beijing. From his experience in two of the most polluted cities on the planet, he was born Choked (Suffocated), published in 2016, an essay on horseback between memories and journalistic research.

Question. What can India learn from China?

Reply. China has taken difficult and ambitious measures for years to ensure that the worst is over (according to data from the POT, between 2010 and 2015 fine particle values ​​or increased by 13% throughout India, while in China they decreased by 17%). If the Chinese curve is observed, it can be deduced that in India things are going to be still difficult. For starters, it is less industrialized, it is poorer, and it will not take long to be more populated. To this is added that the multi-party, federal and democratic system is less effective in implementing the measures than the one-party system in China. Due to complex historical causes, such as the caste system and the fact that there has not been a communist revolution in my country, the Indians have less community awareness than their Chinese neighbors. A teaching that can be easily extracted from the problems that Beijing faced It is a long-term struggle. Even if the Government began to undertake coordinated initiatives today, it would be 15 to 25 years before the changes were palpable and lasting. The problem is that the solutions do not fit the electoral cycles and pollution (yet) has not begun to attract votes.

P. In your experience, what are the similarities between both cities?

R. The most surprising thing is how easily toxic air becomes a banal affair. Often you don't talk about it. At most, it is considered an inconvenience to live with. For many years he denied that there was a problem. Until a tipping point is reached, followed by the opposite reaction of panic and despair. New Delhi It is at that point, about 10 years behind Beijing. For me the measures taken (last week in Delhi) are a bit deja vu.

R. It becomes an obsession. People constantly measure PM2.5 levels both outside and inside their home; everyone talks about which are the best air purifiers and masks; social networks are filled with advice, and terms such as sulfur dioxide become part of the usual vocabulary. The parents of young children suffer great distress. Those who can leave the city, well definitely, well to take a "pollution vacation" away from dirty air.

P. In what sense do the poor suffer most?

R. Their homes are worse isolated and can not afford the purifiers and sophisticated masks. Nor can they decide to stay at home if the air is breathable, they have no choice but to go to work. They reside with a disproportionate frequency along large roads, in industrial areas or near garbage incinerators. To this is added the air pollution of the houses, older and greater than that of the outside air. In India, 700 million people are exposed to smoke from chulhas, stone or clay stoves that use cow droppings and twigs as fuel. In addition to PM2.5 particles, carbon monoxide, sulfur dioxide and nitrogen oxides, the chulhas They give off thousands of pollutants such as formaldehyde, benzene, polyaromatic hydrocarbons and dioxins with effects such as tuberculosis, blindness and abortions. According to some calculations, exposure to smoke from an open domestic fire is equivalent to smoking 400 cigarettes per hour. Although these comparisons have their problems, we know that women who cook daily with biomass aspire more than 10 times the amount of PM2.5 established by the World Health Organization. But since domestic pollution is a problem of the poor, it attracts much less attention.

P. What is the worst thing about living in such a city?

R. The worst is at the same time the most basic and involuntary action: breathing becomes a danger. For most of the world's population, breathing fresh air and drinking clean water has become a luxury to which they have no access.

P. With this panorama, what can the citizen do?

R. From buying equipment that mitigates the effects of pollution to changing habits in a lasting way. Without the latter, the first is like putting a band aid on a broken arm. There are five initiatives that can be carried out individually. First, invest in a quality mask. The most important thing is how it adapts to the face. The slits that let the particles pass detract from it. The second, instead of opening the windows to let fresh air in, you have to insulate the house, make sure that the dirty air is left out and buy a device to measure the levels of indoor pollution. Third, make sure the neighborhood trash is separated and recycled instead of being incinerated. Fourth, limit the use of the car. And finally, we must make air pollution an electoral issue. If politicians come to believe that the environment can give them votes, the regulatory changes will be closer.

P. To what extent is the emergency experienced last week in Delhi exceptional (or not)?

R. For several years, similar levels of pollution have been recorded in the northern area of ​​the indogangetic plain, which includes the city of New Delhi. Early November is usually the worst time, because it is when stubble is burned to prepare the fields for the next planting season in the neighboring states of Punyab and Haryana. This coincides with an increase in the combustion of biomass when winter comes (people burn leaves and other plant materials to warm up), as well as thermal inversion, which leaves cold air (and pollution) stagnant in the lower layers of the atmosphere, near the earth's surface. It is also the time of the Diwali Hindu festival, which is traditionally celebrated by throwing firecrackers, which adds a long list of chemical pollutants to an air of poor quality. The situation is not exceptional at all. On the contrary, it has become almost as predictable as the changing seasons. Autumn follows summer, and pollution follows autumn.

P. How it happened before the Great Fog of London of 1952, can these critical peaks detonate measures or are we too accustomed?

R. The Great London Fog of 1952 prematurely ended the lives of 4,000 people, helped pave the way for the Clean Air Act passed in England in 1956. Among other measures, the new regulations established “smoke control areas” in several cities and took power plants out of urban centers. The current situation in New Delhi can also be an incentive for society and politicians to finally take real action. Air pollution is a problem of human origin and its solution depends on human beings. Cases of serious pollution, coupled with the emergence of an increasingly large middle class concerned with health, and a greater presence on the international scene will eventually open their eyes to the problem. But it is a difficult process that requires political will, citizen awareness, civil society activism, corporate compliance and bureaucratic incentives. It will also require your time. It is not realistic to expect radical changes to take place in a year or two.

P. The media often report crises in big cities, but do measures that are limited only to cities make sense?

R. An atmospheric basin is a region in which air circulates. The wind does not obey the city limits, which demands joint actions between regions. If the states of Delhi, Haryana, Punjab, Uttar Pradesh and Rajasthan do not work in a coordinated manner to address the main sources of pollution – industry, vehicles, agriculture and homes – the effort of a single state or a single city, however Herculean, will not prevent the entire atmospheric basin of northern India from suffocating. At this time, efforts must be concentrated in New Delhi, but the capital is also where there are more resources and the population is more sensitized. However, according to the latest Air Quality Index bulletin published by the Central Pollution Control Board, New Delhi is not even one of the 10 most polluted cities in India.