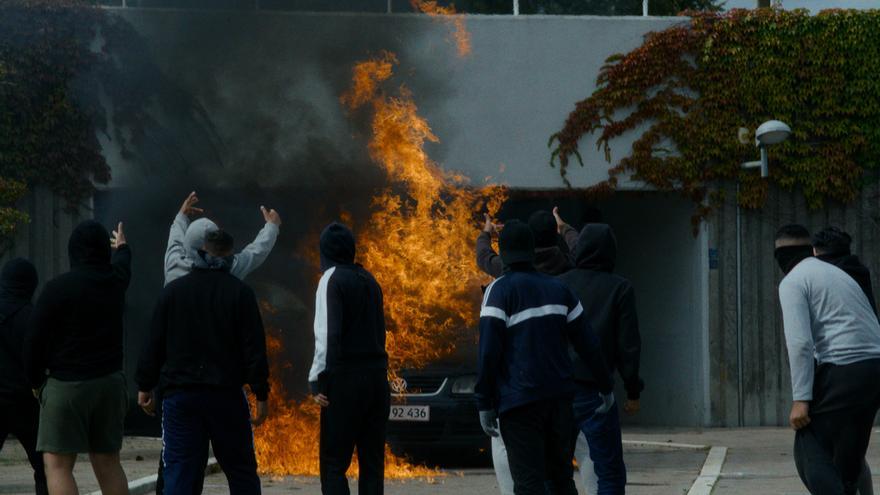 Madrid, Jun 1 (EFE) .- The echoes of the George Floyd case - racial tension, police violence - resonate in "Shorta. The weight of the law", a Danish thriller that uses and subverts the conventions of the genre to propose a reflection: "Human beings are more than zeros and ones, we are multifaceted," director Anders Ølholm told EFE.

Directed by four hands with Frederik Louis Hviid, the film hits Spanish cinemas next Friday after its tour of festivals such as Venice and Toronto.

The plot takes place in a single day and in a limited space, a suburb of a Danish city. Two agents make a routine patrol when the news of the death of a young immigrant under police custody occurs, which sparks violent riots in the neighborhood where they are and they become trapped.

"We were editing the film, a year ago, when George Floyd was assassinated; we had been inspired by a Danish case from 30 years ago but the parallelism was absolute: a young man arrested in a protest repressed by the police, was suffocated, entered he ate and died, "says Hviid.

"At that time it was obvious that the issue is still very relevant and is something we need to talk about," he adds.

Admirers of the American police thrillers of the 70s and 80s, from directors such as William Friedkin, Sydney Lumet or Walter Hill, Ølholm and Hviid use genre clichés when defining the main characters, of opposite personalities (rough / sensitive, introvert / extrovert, funny / serious) but at the same time they delve into them.

"We were very aware of the use of archetypes and we wanted to use them to later subvert the expectations of the public, on a superficial level they are archetypal characters but we have tried to make them three-dimensional", emphasizes Hviid.

Ølholm sees "Shorta" as a kind of "cautionary tale" about prejudice in general. "Human beings are multifaceted, we are not just zeros and ones, we are concerned that we are going in that direction, where people are good or bad and there are no nuances, we wanted to make a film that examines the reasons why people do what they do. makes".

"Frederik and I talk a lot about how we would feel if we were police officers and every day we had to confront the worst of human nature - lies, violence, murder - and still try to remain attached to your values ​​... it is very difficult that all that does not affect you, that it does not change you, "he says.

That said, he believes that cases of police violence in the United States have much to do with the lack of adequate preparation for a job that is "extremely difficult."

To prepare the film, they conducted numerous interviews with police and young immigrants. In one of them, a young female agent asked them for the title of the film. "We explained to her that it is an Arabic word, this is how young people call the police and she replied: 'they should hear what we call them'" and murmured "animals."

The directors admit that reactions like this are "very discouraging", but they believe that the film also offers room for hope.

"It is not a film that seeks to polarize or create controversy, on the contrary, we aspire to unite people with this story, that people with different political views can see it and perhaps talk about what it raises, for us it was crucial not to condemn anyone" .

From the visual point of view, the couple makes a virtue of necessity, filming in a limited space and exploring the off-field. "The amount of information that enters the frame is as important as what does not, and that concept comes from not having a big budget or a lot of time," admits Ølholm.

Hviid highlights the influence of films like "Saving Private Ryan" in the use of a subjective camera that seeks to create an immersive experience for the viewer.