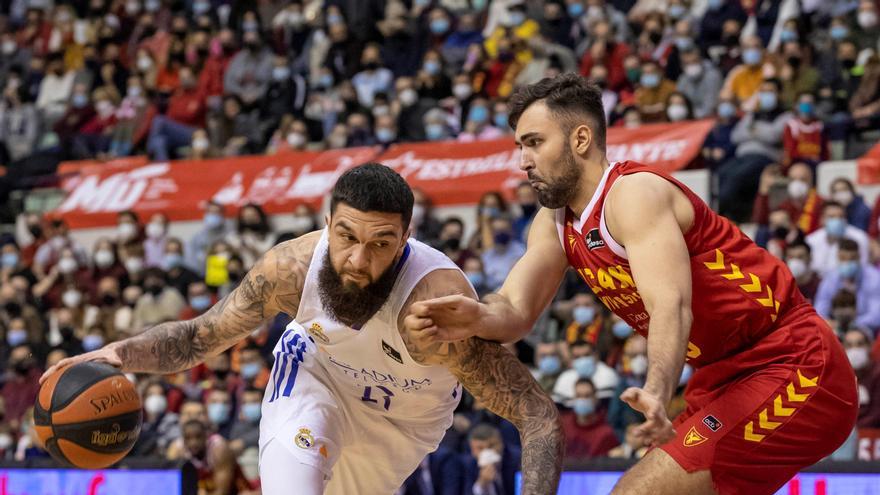 The Real Madrid remains a solid leader in the Endesa League and he has shown it by winning 71-80 at UCAM Murcia Basketball Club in a game that has dominated from start to finish and in which it has had French center Vincent Poirier and American point guard Nigel Williams Goss as stilettos, with 24 and 18 points, respectively.

Both have been the best against a rival who has never given up, but who has lacked success to really fight for the win, despite which he is still fourth.

Madrid, who faced the meeting with the last minute loss of Fabien Causeur, infected by coronavirus as Thomas Heurtel and the coach Pablo LasoIt was a gale from the start.

The 5-13 start thanks to the success of Williams Goss and Poirier, authors of seven and six points at the start, forced Sito Alonso, grana coach, to request a timeout with less than three and a half minutes played.

The situation did not improve for the home team, who lost 7-19 to Poirier already in ten goals. Madrid, with a lot of defensive intensity, commanded very clearly and closed the quarter with 17-25 despite a first attempt at a reaction from UCAM CB.

In the second period, the university students, pressing on defense, were placed within three points (24-27), but the individual quality of the leader put things back where they were after a 0-7 partial in the blink of an eye (24-34).

Before the break, Rudy fernandez left the track with discomfort And, without the Spaniard on the field, his team went to the locker room ten points up (35-45) with Juan Núñez, a 17-year-old point guard, having minutes and with Sadiel Rojas also retiring injured at the premises.

The painting directed by Chus Mateo in the absence of Laso he controlled the situation from the initial jump and his advantage was inconclusive without being clear.

However, this UCAM CB is not one of the teams to surrender regardless of their rival and managed to stay with options at the end of the third quarter with 52-59 and with Thad McFadden contributing 11 points to lead the university attack after 30 minutes.

In the last period, the script was maintained and the 54-67 that reflected the scoreboard of the Palacio de los Deportes de Murcia With seven minutes to go, it was practically final because the poise of the Whites prevented their rival from really believing in the possibility of coming back, no matter how much Isaiah Taylor scored several house-brand baskets to finish with 16 points on his locker.

Without doing an exceptional match either, the leader took his thirteenth victory in 14 days and leads by two wins over a Barça whose game this week has been postponed due to the covid that has affected Baxi Manresa, who had to be his rival in this Sunday. UCAM CB, meanwhile, continues to be the surprising fourth place now with eight games won out of the 14 played.

Incidents: Match corresponding to the fourteenth day of the Endesa Basketball League that was played at the Palacio de los Deportes in Murcia before 5,218 spectators.