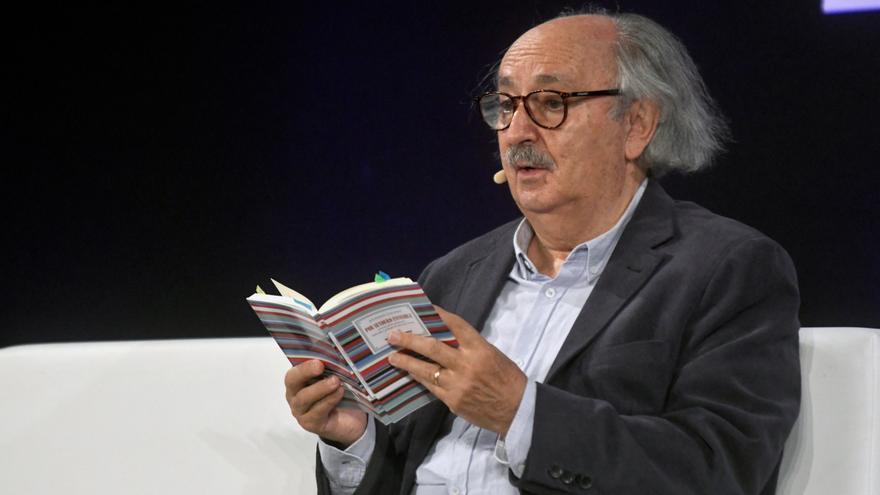 Segovia, Sep 19 (EFE) .- Leonese poet Antonio Colinas has claimed this Sunday that in moments as "critical" as the present, in which we are all "full of fears", poetry is an opportunity to look back at the interior of each one: "Poetry is the search for the fullness of being," he pointed out.

Hay Festival Segovia has organized this Sunday, the last of three days of programming, a meeting between the writer and Mererid Hopwood, one of the most recognized poets of Wales (United Kingdom), who has been appointed ambassador of the festival in 2021 and therefore participates in all venues, in this case online.

During the talk held at IE University's Segovian campus, Colinas shared his reflections on the current moment, impregnated by the health crisis, with the Welsh artist in a conversation moderated by the journalist and poet Carlos Aganzo.

Colinas has opined that it is the role of poets at this time to denounce certain social problems such as rural abandonment or mistreatment of nature and also to seek a "return to our interior": "That interior look, which can be exterior when the moment of contemplation ", he pointed out.

He added that, to achieve the "fullness" that poetry pursues, it is necessary to have it "within us", but also "with our environment", referring to nature, a fundamental element in his poems.

Along these lines, Colinas has lamented the fires experienced this summer in Spain, such as the one that occurred between the towns of Navalacruz and Cepeda de la Mora, which devastated some 22,000 hectares, disasters that are of "a special gravity" for Castilla y León.

In his opinion, the issue of depopulation continues to be "a pending issue": "We are in a time in which there is a tendency to end a society that was maintained since the Neolithic Age, a society of humble life, of unjust experiences, but that he enjoyed a certain harmony, "he observed.

Under his analysis, as a result of recent "crises", these issues have come to the fore, as did nature during the worst moments of the pandemic, when citizens remained locked up at home.

"It is curious that, when human beings have been silent, nature seems to have begun to speak," reflected Antonio Colinas, who has also observed that this year has been a "particularly fruitful" period for nature.

"It seems as if nature had said 'here I am' and I come to bring harmony to the disharmony of human beings," he pointed out.

One of his latest conclusions from the meeting has been to underline the importance of "giving testimony" and "being close to the reality" of this land, not like the people who talk about it, but "they see the bulls from the sidelines."

"Being close to this reality supposes, for example, the return with age, with the years, returning to that little house of our grandparents, of our ancestors, and the house is abandoned, it is in ruins, we have had to restore it and there is like a regeneration, like a rebirth ", he pointed out.

"Renaissance is being reborn in that abode of childhood and adolescence", he summarized, before reading to the public some fragments of his poem 'Llamas en la morada'. EFE