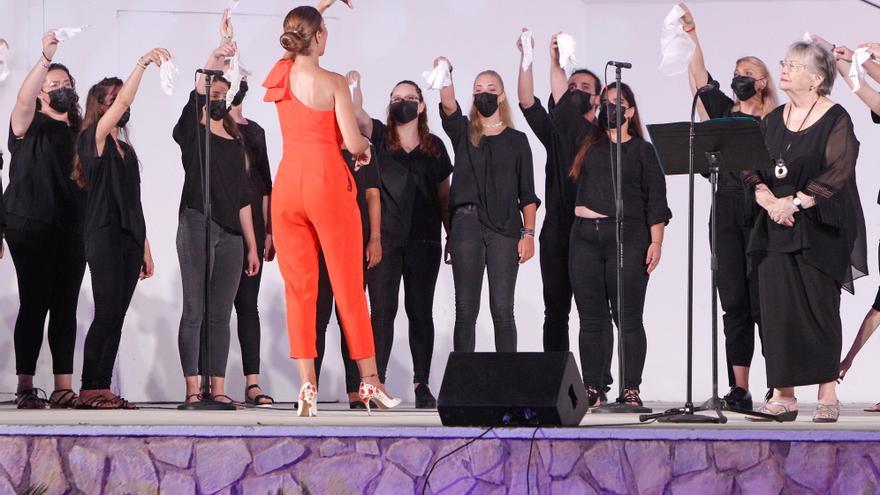 Torrevieja (Alicante), Jul 22 (EFE) .- ‘Tell me and sing me a habanera’ is the recital that starred in the fourth evening of the 67th Torrevieja International Habaneras and Polyphony Contest (Alicante), where, for the first time, poetry and choral singing have gone hand in hand thanks to the actress María Galiana, the baritone Luis Santana and the pianist Víctor Carbajo.

The Torrevieja Symphony Choir, under the direction of Selena Cancino, has also been part of this show, which has combined the verses of poems such as ‘Bautismo no bautiza’ by Ramón Campoamor, with piano songs such as ‘Vivo sin ti’ by César Cánovas or ‘Niña Pancha’, a song from the 19th century by Joaquín Valverde.

The texts have been declaimed by Galiana, who has recognized, before going on stage, that, through the poems, mostly related to the habanera and Torrevieja, she has discovered the “spirit” of this genre.

“La habanera is a mixture of melancholy, sadness and joy, memory, affection, longing and lack, musically speaking,” said the actress, known among others for her character as’ Herminia ‘, the grandmother, in the series’ Cuéntame ‘of Spanish Television.

For the interpreter, this show is a “novelty and an extraordinary joy”. He has assured, along these lines, that the habanera did know the genre: “for us, Sevillians, the relationship between the Guadalquivir and Cuba has always been quite long. Not me, but my grandparents and great-grandparents. For us the habanera is something known ”.

The baritone, Luis Santana, has been “excited” by his participation in this “so recognized” festival and in which he already participated years ago with the choir of Zamora, his land.

This fourth evening marks the equator of this event, atypical in its configuration, where versatility and capacity for reinvention has been exhibited in the particular current circumstances of the coronavirus pandemic.

On the night of this Wednesday, a show was staged that, with the habanera as the protagonist, has gone beyond what was known in itself in a choral event like this.

The president and the board of directors of the Spanish Association of Choir Directors (ADECORO), Ramón Gil and Nuria Fernández, respectively, have also traveled to the emblematic venue of the Eras de la Sal.

Gil has “celebrated” that this contest can be held, “even if it is in a different way”. He has recognized, at this point, that the directors are “suffering a great wear and tear. The coral fabric has eroded a lot in the last year, although we have managed to save the season. We look forward to the social and institutional support ”.

A few words signed by Nuria Fernández, who has assured that “the choral world is an environment and scenario, in many cases, of survival. We do not always have the support that we would like to carry out our work ”.

He assured that they have lived this gala “with enthusiasm. For us it is an honor to be able to share and learn every time we come how habanera is sung and lived ”.

For the evening of Thursday 22 July, after two years of absence, the Choir Maestro Casanovas from Torrevieja and the Choir Voces Graves Quercus Robur from Villarrobledo (Albacete) will rise again.