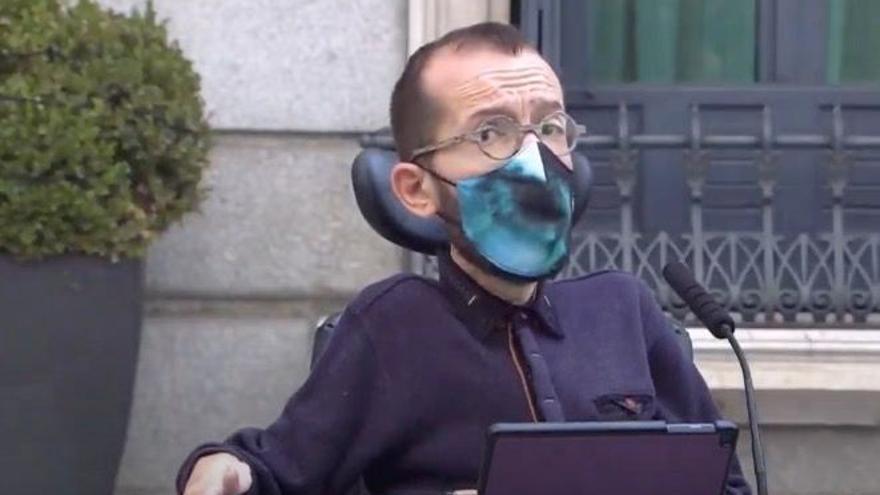 “What a day he has chosen to confess that he has defrauded the Spanish Treasury!” This is how the United We Can spokesperson, Pablo Echenique, commented on the news of the fiscal regularization that King Juan Carlos has requested from the Treasury of opaque cards the treasury he used once abdicated in Felipe VI. The decision of the emeritus monarch has attracted much of the attention of journalists in the commemoration of the Constitution, which this year has been celebrated in the street due to anti-COVID measures and without the traditional groups. Pedro Sánchez has avoided talking about the matter by not answering questions from the media, while Pablo Casado has claimed the “legacy” of Juan Carlos de Borbón and has framed in “private life” the attempt to avoid judicial investigation.

Echenique has assured that the request to regularize the money used between 2016 and 2018 through the opaque cards, which El País has revealed this Sunday, is a “confession”. “He does it because they have caught him,” said the spokesman for United We Can in the Lower House, minutes before the act began and the PP launched itself against those of Pablo Iglesias on that same microphone, considering that they want to end the current constitutional regime.

The president of the PP has claimed the “legacy” of the emeritus king and has framed in “private life” the fiscal regularization of the use of opaque cards to the treasury that “another power of the State” will have to “elucidate.” However, the attempt to settle its accounts with the Treasury at the end of 2020 intends to close the investigation that the Anti-Corruption Prosecutor’s Office opened more than a year ago and that is now in the hands of the Supreme Court Prosecutor’s Office, before which Juan Carlos is surveyed. I. Casado has referred to Juan Carlos de Borbón as “architect of the Transition” and “essential piece” in the recovery of democracy after 40 years of Franco.

Isabel Díaz Ayuso had previously spoken along the same lines, assuring that “this country owes much to King Juan Carlos and if it is a good day to claim his figure, it is today. The Madrid president has taken advantage of her presence in Congress to attack the Executive: “There are even movements of the Government that would agree to overthrow this Constitution.” Asked about those words, Casado has assured that “the Government itself has said it.” I have seen the Minister of Consumption appeal to the republic and some members of Podemos to give way to another system. “” That is why I have to vindicate the system of the 78 and that must be preserved by all parties, “the conservative leader concluded. Casado has once again used the victims of terrorism by ensuring that they see” with astonishment “how the” heirs of Batasuna “are” key “- in reference to the budget negotiation of the Government with EH Bildu- as well as some Catalans for the agreements with the independence groups.

Also the spokesman for Vox, Iván Espinosa de los Monteros, has assured that “the enemies of the Constitution are in the Government.” Santiago Abascal has not attended the event in Congress because he has chosen to participate in a mobilization in Catalonia. The deputy of the extreme right has also assured that the Constitution is in a “delicate” moment of “health” and has asked the Spanish for “a personal effort” in the defense of constitutional values ​​”and not leave it alone in hands of politicians. ”