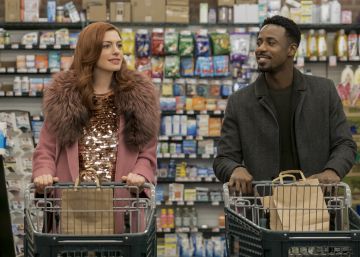 Informative news, historical facts, classic novels, recent books, the news section of the news, podcasts, a column of a newspaper, reports, Broadway musicals … Everything can now serve as an inspiration for a new television fiction. The channels do not stop multiplying and the need for original content grows with them, which comes face to face with another reality: the talent to create them is limited. That is why producers and creators have to catch on the fly any idea that could become a serial production.

17% of the series released this year worldwide are based on books, a percentage that rises to 26% if only the productions of the platforms are taken into account, according to data from The Wit consultancy presented last week at the Mipcom from Cannes, the largest television market in the world. Another upward trend that Virginia Mouseler, executive director of The Wit cites, is that dramas based on real events have gone from assuming 5.2% in 2018 to 7.1% this year — on platforms, that ratio rises to 9.6% -. And while this exercise two dramas based on podcasts In fiction, there are 25 ongoing projects that start from a radio program.

An example of this latest trend (and how fragmented and coveted the series market is) is Limetown, a mystery and science fiction show starring Jessica Biel, based on a podcast and that Facebok released last week as a new commitment to become a generator of fiction content. He podcast original from Limetown It added two seasons, issued in 2015 and 2018. It tells of the disappearance of 300 inhabitants in a small town and the subsequent investigation by a reporter.

The newspaper The New York Times collects since 2004 in a column that publishes weekly stories about human relations and from them it is nourished now Modern Love, that saw the light last week on Amazon Prime Video and that adapts, with greater or lesser fidelity, eight of the love stories – in the broadest sense of the word – that were published in that space. A report of the same New York newspaper will also be the main source of another series that will recreate the fire that Notre Dame suffered last April.

In the same way, last month he came to Netflix Believe me which was based on the research that journalists Ken Armstrong and T. Christian Miller published in the non-profit news agency ProPublica in 2015 and for which they won the Pulitzer Prize in 2016 (edited by K. O. Books in Spain).

Screenwriter Ryan Murphy, one of the most prolific today, is going to go one step further. Among his many projects is the adaptation of the Pulitzer winning musical To Chorus Line (1975), but not in the form of a film, as the criticized adaptation of Richard Attenborough with Michael Douglas in 1985. This time, the famously short two-hour musical will become a series of 10 chapters. The story presents a group of Broadway dancers, with more years than success behind them, who participate in the selection of a position in the choir of a new work.

The productions based on real crimes are one of the fashion trends in recent times, mainly for documentary series but also for fiction. The plots of Mindhunter, That's how they see us, Manhunt Unabomber, I'm the Night or The act they occupied many pages in the press before making the leap to television. The spy, the drama starring Sacha Baron Cohen on Netflix, is based on the Israeli agent Eli cohen. And the different deliveries of American Crime Story they drink from some of the most media events of recent times like the O.J. Simpson, the murder of Versace or, now in preparation, the Lewinsky case.

In that line enter To Confession, of ITV, released in September in the United Kingdom (it has no publication date in Spain yet) and that part of the investigation of the murder of a woman in Bristol in 2011. In Cannes the Spanish was highlighted Don't pray anymore a project signed by Beta Entertainment and described as a thriller based on real facts about "a secret group that investigates inexplicable facts." Co-production Mexican-Spanish is Hernán, the man, focused on the Spanish conqueror and that Amazon Prime Video will premiere on November 21. Another of the outstanding series was the Chilean-German Dignity, about the sect led by Nazi pedophile Paul Schäfer in southern Chile.

In the selection of novelties in the genre of fiction that was presented in Cannes highlights the amount of thrillers that revolve around the disappearance or kidnapping of children. It is the case of the Canadian Alert Amber, focused on the disappearance of a child with autism, or of Danish success DNA, where the missing person is the son of a policeman.

They also highlight the dramas that teenagers have in their center. The latter are influenced by the success this summer of Euphoria, with a protagonist addicted to drugs and who falls in love with a young transsexual. In this line are the Norwegian Nudes, about bullying through social networks or the Australian institute drama The huntling, while cyberbullying is the center of the French Stalk. The stories with women as protagonists are also another prominent trend among the projects chosen by the consultant, as is the case of the Spanish Mommy, in which a young woman refuses to become a mother despite the pressures of society.