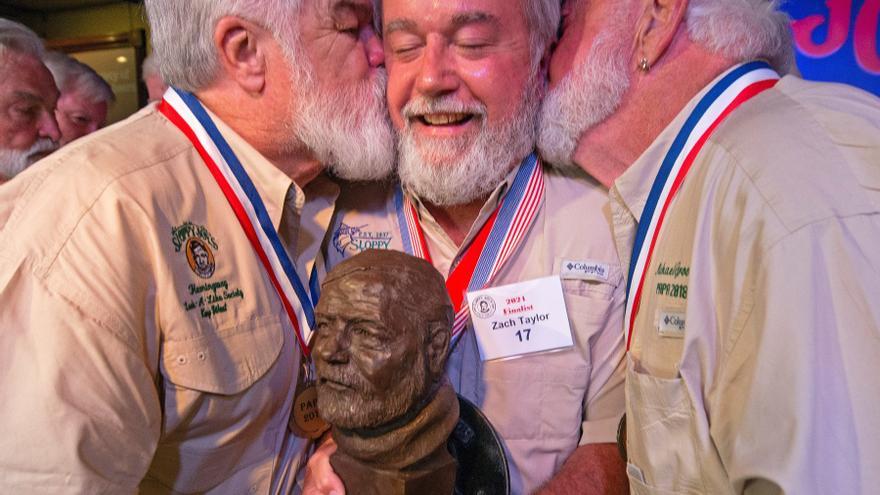 Miami, Jul 25 (EFE) .- Zach Taylor, owner of a plumbing in Georgia (USA), won today among twenty-five finalists the traditional contest of the city of Key West (Florida) as the most similar to the American writer Ernest Hemingway.

“Hemingway has been a fixture for us since we began entering the contest,” Taylor, 63, said in a statement from the city.

The victory for Taylor, owner of an Ambrose plumbing and electrical supply company, was especially significant because his late father-in-law, Carlie Coley, won the traditional contest in 2000.

The new Hemingway likened the writer-like contest to a “family reunion,” especially after the 2020 edition was canceled due to the coronavirus pandemic.

This year, 137 participants competed in the writer’s “twins” contest that has been held since last Thursday at the traditional Sloppy Joe’s bar, a favorite of the famous author and winner of the Nobel Prize in Literature when he lived in the city.

Taylor said he shared the passion of Hemingway, known as “Papa”, for fishing, hunting and the “outdoor” lifestyle.

“You know, everyone has read ‘The Old Man and the Sea’ and things like that, which he wrote, but coming down here, you start to see snippets of a man that you knew nothing about,” Taylor said after his win.

“I think ‘Papa’ would be proud of what has been accomplished on his behalf in a city that he loved very much,” he added.

Hemingway spent long periods of time in the city, especially winters, from the late 1920s to the late 1930s.

The contest is one of the highlights of the summer in the Florida Keys and is part of the “days” that the city dedicates to the writer to coincide with his anniversary, which falls on July 21.

With a cultural program, but above all festive, the vast majority of contestants show up with beards and white hair and dressed as explorers or to go on safari.

This year also stood out the “Bullfighting” that imitates the San Fermín enclosure in Pamplona (Spain).

Although slower and safer than the Pamplona challenge, the Key West race featured the novelist’s imitators fully dressed in white with red berets and belts – typical of the original party – and wandering through the island’s historic center adorned with flags of Spain and accompanied by a “herd” of wooden bulls mounted on wheeled boards.

Hemingway first arrived in San Fermín in 1923 and made his last visit to the annual fiestas in 1959.

In October 1926 his novel was published under the title “The sun also rises” in Europe and “Fiesta” in the United States. This novel had a great impact in both Pamplona and San Fermín by presenting the festivities to a worldwide audience.

Likewise, in 1931 he obtained material for his book “Death in the afternoon” with a story about two terrible bullfighting performances.

Hemingway wrote some of his most enduring classics while living in Key West, including “For Whom the Bell Tolls” (set in the Spanish Civil War) and “To have and not to have.”

Winner of the Nobel Prize for Literature, his house in Key West is today a museum.