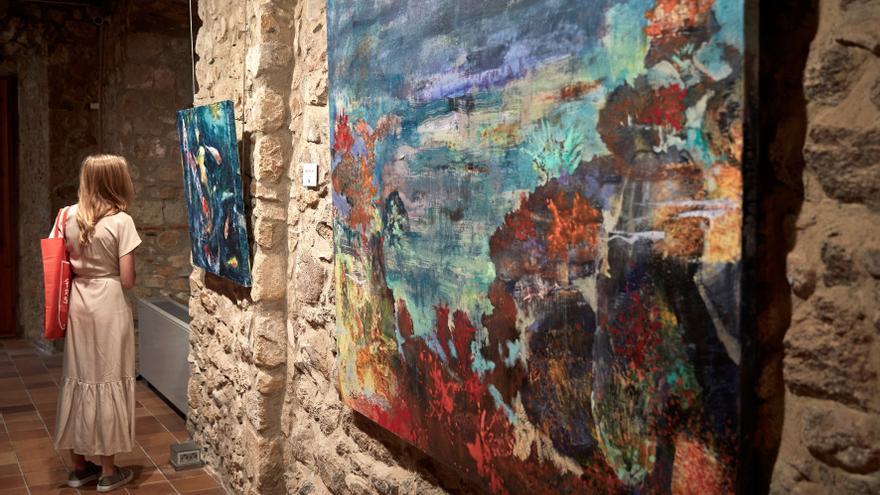 Castell-Platja d'Aro (Girona), June 5. (EFE) .- An exhibition by the Girona painter Pere de Ribot, one of the Spanish artists of recognized international prestige, allows traveling from this Saturday in Platja d'Aro (Girona) through its land and seascapes through fifty oil paintings .

The exhibition, which opened this Saturday, can be seen until July 25 at the Castell de Benedormiens in Platja d'Aro, where the curator and art critic Alexandre Roa Casellas highlighted today that de Ribot is not a landscape painter in the classical sense of the term, although he extensively explores landscape as the main theme of most of his work.

However, Roa has pointed out that the artist does not stand "with the easel in front of a field or take photographs to represent a specific fragment of the world", but that his is a work of "interior exploration" in which the landscape is found "within the memories and baggage of a lifetime".

The exhibition is a journey through different places, where nature and the elements built by man take on a new dimension, since in his works the horizon often disappears and it is not known where the earth and the sky begin and end.

And in other oil paintings he ventures to capture the horizons of the underwater bottom: "The rocks, the underwater vegetation and the fish coexist with the water, which is nothing but the artist's great ally as a distortion of the figurative world", describes the art critic .

Son of an architect, De Ribot, one of the internationally renowned Spanish artists who has held exhibitions in European capitals such as Madrid, Paris, London or Brussels and also in the United States or Mexico, was born in Girona in 1962 and traveled throughout Europe since he was a child. following the jewels of the Romanesque and the Renaissance.

He studied at the Faculty of Fine Arts, moved to London and, when he returned, began to exhibit all over the world, where he has already had more than 200 exhibitions.

Currently the painter alternates a studio in Barcelona and another in Siurana d'Empordà and has participated in various artistic and cultural festivals in Morocco, the Dominican Republic, Miami or New York.

Regarding the artist's way of painting, Roa points out that de Ribot follows a process "in reverse of the classical landscape: instead of observing it and drawing it to fill in with color, it is from the color that an imaginary view is recovered".

And it is that for the art critic the works of the Girona painter are not only capable of describing a landscape, "but he invokes it" and "shares it with whoever observes the jewel of his contemplation".

"He told me that my paintings had given him an inner peace that he had never felt", he recalled de Ribot, who added: "It is the most beautiful comment they have made about my work and I hope they also transmit this peace to you" He has told the fifty attendees.

The mayor of Platja d'Aro, Maurici Lucena, has stated that he hopes that this exhibition will be one of the first steps to recover a summer more similar to the pre-covid era.

"Little by little we are returning to organize activities that we missed, such as the Xalaro festival, the fire castle, or this exhibition," said the mayor before recalling that the exhibition had to premiere last year but the pandemic prevented.

"Celebration of the gaze" is organized by the Castell-Platja d'Aro town hall and can be visited in the afternoons from Tuesday to Friday, and during party hours - morning and afternoon - on weekends and holidays.

In addition to the exhibition of the Girona painter, the proposals "From unstable equilibrium to the guardians of dreams", by Martí Rom in the Parc dels Estanys and the collective exhibition "Polígrafa" with graphic works are also part of the municipal exhibition cycle by Jaume Plensa, Antoni Tàpies, Joan Miró or Joan Brossa.