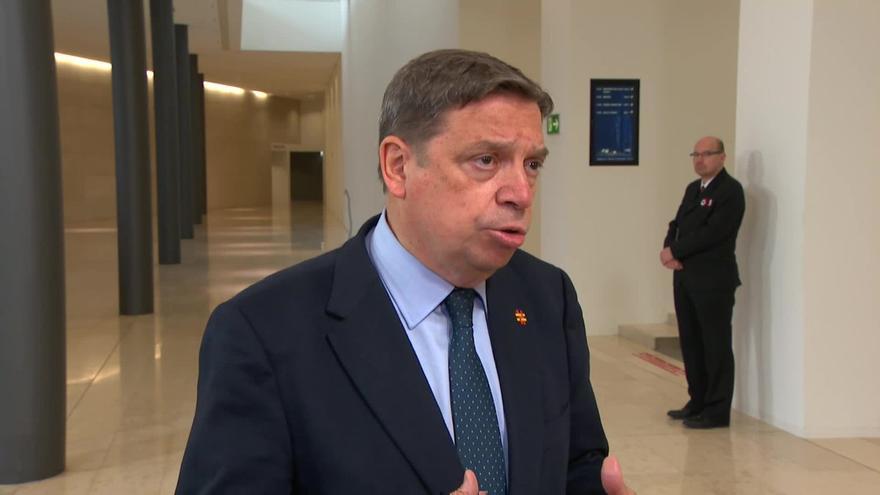 "Displaced from the calendar point of view." "Absolutely unreal." "Out of place". These are the adjectives that the Spanish Minister of Agriculture, Luis Planas, has dedicated to the proposal presented this Tuesday by the European Commission to update the Directive on Industrial Emissions, which includes a toughening of the standards for macro-farms due to their polluting capacity.

Brussels, on the other hand, defends that its proposal provides that “the largest cattle, pig and poultry farms will progressively enter the scope of the new rules. That is to say, around 13% of European commercial farms, responsible, as a whole, for 60% of ammonia emissions and 43% of methane emissions in the EU from livestock”.

According to the European Commission, “the health benefits of this extension of the scope of application are estimated at more than 5,500 million euros per year”.

"This week we have had a sample of something that seems displaced to us from the point of view of the calendar", replied Planas upon arrival at a Council of EU Agriculture Ministers, in Luxembourg. “I have had a meeting with the president of Copa and the president of Cogeca [del que son miembros Coag, Asaja y UPA] in relation to the modification of the directive on industrial emissions”, explained the minister in relation to two organizations of the agricultural industry singled out by the Corporate Europe Observatory for “greatly undermining the goals of farm-to-fork strategies”. And Planas has sentenced: “It seems absolutely unreal to us that at this time, with the priority we have in relation to food production, the European Commission this week publishes this draft where it establishes that, for example, a farm with 150 cows is a facility industry subject to the same standards as a chemical industry. I think that is completely out of place."

However, the European Commission proposal does not provide the same standards for a farm with 150 head of cattle or more than for a chemical industry. If anything, diplomatic sources related to the file explain, in very broad terms, there is a similar logic in the sense that the farm must request a permit from the local authority. And then, according to the industry emissions directive, the authority would need to give a permit specifying technical conditions, but the requirements are different.

And this is only for 13% of all the largest farms in Europe, whereas until now a very small part of the farms was included and now it is being proposed to extend the system.

But Minister Planas is not convinced: “We call the attention of the European Commission: be aware of the moment we are experiencing and, furthermore, be consistent with your own statements and intentions on this matter. This is not the best time."

Sources close to the file explain, however, that the objectives of the European Green Pact have a horizon and a path that cannot be left behind. And that, in any case, the presentation of the proposal this week does not mean that it will enter into force in the midst of the war in Ukraine. It is a proposal that would begin to have obligations within five years, perhaps within six years with an eye on emissions having to go down and pollution having to go down in accordance with the European green deal.

Already last January, the European Commission stated that the priority is to support small and medium-sized farms as opposed to the macro-farms, with which there is "a problem". This was said by the European Commissioner for Agriculture, the Polish Janusz Wojciechowski, in an interview with the Efe agency. Wojciechowski stated: "Of course, we have the problem with the development of large-scale agriculture, especially in some sectors of animal production, such as pork, poultry and laying hens."

The commissioner abounded in the argument as to why the Community Executive believes the extensive model is more convenient than the macro-farm: “There will be no food security if we allow small farmers to be eliminated from the agricultural system in the European Union. No. We should stop this process and give small farmers the possibility to continue their crops and breeding.” And he added that on smaller farms "it is easier to ensure good standards of animal welfare" and "achieve sustainability of production."

The words of the European Commissioner came after the Spanish Minister of Consumer Affairs, Alberto Garzón, offered similar arguments in an interview with the British newspaper The Guardian, which was later used partially and out of context by the right, the extreme right and part of the PSOE to attack the leader of the United Left. Garzón was in favor of extensive livestock farming as opposed to the meat industry based on macro-farms, considering that the latter pollute "soil and water" to produce "worse quality" meat and the result of "animal abuse."

Then, in January, the United Left moved a battery of questions to the Community Executive on the matter of the macro-farms through the IU spokeswoman in the European Parliament, Sira Rego: "What is the position of the European Commission on the macro-farms, its ecological impact and what farming models does the Commission consider to be the most appropriate to meet the objectives of sustainability, quality and animal welfare? What specific measures is the Commission going to promote in order to deal with the harmful effects caused by these macro-installations, and thus implement the recommendations approved by the European Parliament? What is the status of the judicial process initiated by the Commission against Spain due to non-compliance with community regulations on nitrates?

And the European Commissioner for the Environment, Virginijus Sinkevičius, replied in March: “Intensive livestock farming can have negative effects on the environment. In its Farm to Fork Strategy, the Commission announced its support for the transition to sustainable farming, committing to review animal welfare legislation by the end of 2023. Furthermore, the Commission is examining legislation on feed additives to reduce methane emissions”.

The community executive added: “Industrial livestock farms are also covered by the directive on industrial emissions, as well as in the conclusions on the best available techniques, which establish emission levels for ammonia. A review is planned for April 2022 which will include options to reduce pollution, also in relation to cattle, pig and poultry farming. Intensive livestock projects fall within the scope of the Environmental Impact Assessment Directive, which requires an environmental impact assessment of major projects.

With regard to the legal procedure for the non-compliance with the community regulations on nitrates, the European Commission explains that “it sent a letter of summons and a reasoned opinion in which it highlighted the non-compliance by Spain with the directive on nitrates. In 2021, the Commission announced its decision to refer Spain to the Court of Justice of the EU for not having taken sufficient measures. The Commission explained that, despite some small advances, Spain must adopt more measures against eutrophication for the entire country, since those adopted to date have not been sufficient to achieve the objectives of the Directive. In addition, it must review and designate nitrate vulnerable zones in seven regions, include all the necessary mandatory elements in the action programs for five regions and adopt additional measures for the four regions where the measures established have been insufficient to achieve the objectives. of the directive”.