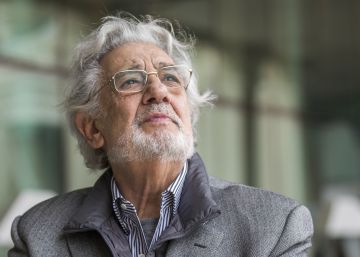 The tenor Placido Domingo has decided to cancel its next representations of La Traviata at the Teatro Real de Madrid, scheduled for May, and will also withdraw from those performances in which companies or theaters have difficulties in assuming their commitments, according to a statement sent Thursday. The Royal Theater was going to announce at 11 in the morning, after the meeting of its executive committee, which also canceled those actions, but the tenor has advanced.

The differences within the theater direction have delayed the decision. The Ministry of Culture, which has the majority, has tried to impose its will to announce it before, after the Zarzuela Theater I decided on Wednesday to suspend the singer’s performances scheduled for May 14 and 15. But from the Community of Madrid, also present in the management bodies of the Royal next to the City Council, the tenor was still receiving support yesterday from its president, Isabel Díaz Ayuso, who said he is “one of the best tenors in history “, even if confirmed the cases of abuse would have disappointed him, and that if cancellations occurred it would be” a very big loss in the music of a great ambassador of Spain around the world for the work he has always done. “

After the announcement of the tenor, the Real has issued a statement to explain its procedure: “The Executive Committee of the Royal Theater has met today, in order to decide what comes after Placido Domingo recognizes and regrets the damage that has caused some women in the United States, and asks for their forgiveness. Hours before being reunited, a new statement has been known in which Placido Domingo resigns from singing at the Teatro Real in the next production of La Traviata. The Royal Theater, for its part, is reaffirmed in its zero tolerance policy against harassment and abuse of all kinds, and in its permanent solidarity with the victims. It also confirms that Placido Domingo will not participate in the next production of La Traviata which opens in May. “

The accusations against the tenor range from “flirting to sexual propositions, inside and outside the workplace”, according to the conclusions of a report commissioned by AGMA, the opera musicians union from the United States, which was made public on Tuesday. After the publication of this report, the artist himself assumed “full responsibility” for the accusations and apologized for “the pain” caused. Domingo now says in the statement that he wants to offer an “additional statement” to correct the “false impression generated by my apology” in some of the articles that reported on this investigation.

In addition, the Cultural Association of Friends of Music has decided to cancel the concert scheduled for May 3 at the Úbeda International Music and Dance Festival. For its part, the Executive Committee of the Board of Trustees of the Palau de les Arts de València will discuss, during a meeting this Thursday, possible actions following the situation of the artist. Among the topics that will be discussed, there is the request of some groups to remove the name of the artist from the Theater Improvement Center.

The singer’s calendar for this year still includes several performances, according to his website: the first one is scheduled for March 22 with Simon Boccanegra at the Staatsoper in Hamburg; On the 30th of the same month it is announced that he will sing in Lucerne and on April 19 in Minsk. Throughout the spring it has planned two appearances in Moscow, one of them in the Bolshoi, and in Spain it is on the Ubeda festival poster and in the Traviata at the Royal Theater of Madrid. From June, its presence is scheduled at the Verona Arena, in several performances in Vienna, in Florence, at the Royal Albert Hall in London, in Cologne, Salzburg, Munich and, finally, on November 12 and 14, in the theater of La Scala in Milan again with the Traviata. In any case, the representations of the zarzuela Luisa Fernanda they will continue without the tenor, according to the ministry.