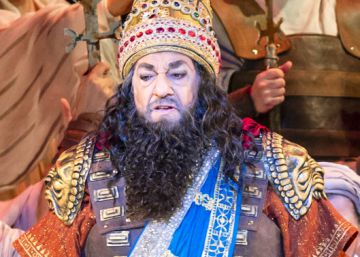 It has not been his ideal year. Between cancellations and acclamations, Placido Domingo moved after 20 women accused him of harassing them in the United States, through an investigation by the Associated Press. The tenor had two dates in Spain and has confirmed them. The first one is at the Palau de les Arts, in Valencia, where Monday premieres Nabucco, from Verdi, which will be on the bill until next December 16, with all tickets sold out. In May and July, Sunday plans to sing La Traviata at the Royal Theater of Madrid.

Domingo's life turned around on August 13, when eight singers and a dancer assured AP that they had been pressured by the singer at some point in their careers to have sex. 11 other women poured more testimonials against him in a second installment, disclosed days later. Only three of them, Patricia Wulf, Angela Turner Wilson and Melinda McLain, agreed to provide her name. To date, no complaints have been registered in any court.

From then on, the singer's career was split into two main axes: the United States and Europe. In North America it was ditching commitments and neither will he sing during the Tokyo Olympics, where it was planned to participate with the actor Ebizo Ichikawa XI, one of the most relevant figures of the Kabuki theater, in a performance to inaugurate a cultural program of the Games.

Placido Domingo resigned from his positions at the Los Angeles Opera, where, according to several testimonies, some of the reported facts occurred. There is currently an ongoing investigation within the Californian theater by attorney Debra Wong Yang. After canceling in Philadelphia or San Francisco, the most traumatic of all came. A day before the premiere of what was clearly going to be his farewell in a performance before the public of the Metropolitan of New York, the singer decided not to go on stage. Tension among theater workers made Domingo give up brand new Macbeth, also from Verdi, with Anna Netrebko, among other figures, in the cast.

His goodbye came, but in other circumstances. "I am happy," he said, "that, at the age of 78, I was able to sing the wonderful leading role in the general rehearsal of Macbeth, which I consider my last performance on the Met stage ”. The singer took the opportunity to refute the accusations and argued not wanting to blur the success of his co-stars. "After a reflection I think that my appearance in this production will pay attention to the hard work of my colleagues on stage and behind it," he said in a statement.

It was the second time he had spoken on the matter. As soon as the first accusations were known, he launched the following message: “The accusations of these unidentified individuals dating back to 30 years ago are deeply worrisome and, as they arise, inaccurate. Even so, it is painful to hear that it may have bothered someone or made them feel uncomfortable. It doesn't matter how long it has been, despite my best intentions. I believed that all my interactions and relationships were always welcome and consensual. ”

However, the reaction in Europe has been very different. Two weeks after the scandal will break, Domingo was acclaimed in Salzburg, the first place he went on the scene after the scandal. There he interpreted Luisa Miller, of Verdi, next to the Polish Piotr Beczala or the Georgian soprano Nino Machaidze. The reaction has encouraged him to confirm a performance next summer at the Austrian festival, where the artist debuted in 1975 with Don Carlo. The same happened in Zurich last October, where it also represented Nabucco. For this month, it also plans to commemorate the 50th anniversary of its premiere at La Scala in Milan, next 15th.

What is Marcelo Luján reading? | Babelia