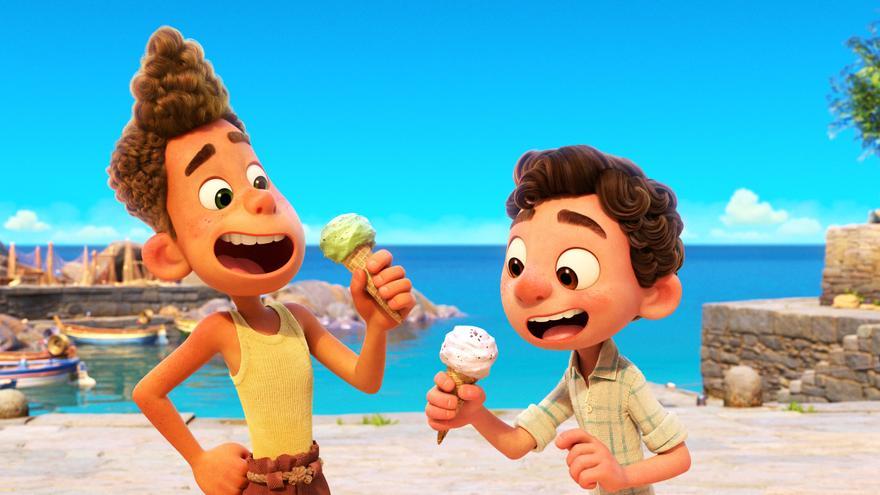 Los Angeles (USA), Jun 16 (EFE) .- An eternal summer, the Italian coast, scooters, ‘gelatos’ and two friends who share a secret are the ingredients of “Luca”, the new Pixar film that this Friday he takes over from the Oscar winner “Soul” with a premiere on the Disney + platform.

Its director, the Genoese Enrico Casarosa, had been behind a project for years that would serve as a tribute to his land and also wanted to tell a story about friendship. “I realized that the best time was the summers and the best setting was in the towns of Cinque Terre, it was impossible to separate that,” he explained to Efe.

“Luca” tells the story of two 13-year-old friends, Luca and Alberto, who spend their days in a town on the Italian Riviera like any other teenager.

But in reality they hide something: They are sea monsters that, when not in contact with water, look like humans.

The two protagonists are based on the life of Casarosa. Alberto was his best friend back then and he still keeps in touch with him.

“He was the complete opposite of me, very outgoing. I was the introvert. But we both felt a bit losers, weird … we were not the prototype of popular people,” he recalled.

As the characters discover the world of humans, they have to deal with their own problems: Alberto awaits the return of his father and Luca yearns to free himself from an overprotective family that sees only dangers around him.

“THERE IS A METAPHOR ABOUT FEELING DIFFERENT, WHATEVER IT IS”

When Pixar released the trailer for “Luca”, many netizens thought it was Pixar’s LGTB movie. Summer, Italy, two friends and a town. A kind of “Call Me By Your Name” in cartoons full of similarities with the Luca Guadagnino film.

“I never thought about it, this movie is about a stage before the boyfriends, girlfriends … and all that complexity arrive,” replied Casarosa.

Jealousy arises between Luca and Alberto, but in a friendly way. Especially when they make friends with the intrepid Giulia and train to win a sports competition.

“If we saw those children the following summer … maybe things would get complicated,” he joked. “But that was not the intention.”

As is usual with all Pixar projects, “Luca” offers readings for all ages and sensibilities: For children it is a story about friendship and being honest with yourself; Adults will revive the desire to know the world in adolescence and for the LGTB community it will try to grow up feeling different.

“The fact that they are sea monsters is a metaphor that makes any difference. Children share a secret,” explained the filmmaker.

But beyond the plot, Pixar has once again recreated a real setting through its renowned style.

Portorosso, a fictional town that could well be Manarola, Monterosso, Riomaggiore or any other town in Cinque Terre, serves as the setting on which the studio responsible for “Toy Story”, “Cars” and “Coco” recreates an animated vision of it. region declared a World Heritage Site.

Casarosa, who had already imagined the Italian coast in the Pixar style with the short “La Luna” (2011) (nominated for an Oscar for best director in 2011), allowed himself to be guided by his colleagues from California.

“I grew up there and I know it well, but I remembered that when we recreated Mexico for ‘Coco’ we worked a lot so that everything was correct and exact. So I consulted a lot, I wanted to avoid it being too cliché but also very specific and that only people understood. from Genoa, “explained Casarosa.

People roam the cobbled streets town on Vespas and bicycles, feeding on seafood, pasta and ‘gelato’ while, like good Italians, jealously guarding their traditions.

In contrast, in Portorosso there are no smartphones or tourist excursions. Casarosa decided to place his film in the 50s and 60s to make it more “timeless.”

“There is something special about Italian music of that time, in the golden age of Italian cinema. Even the Vespa designs seemed prettier then,” he said.

After more than two decades living in the United States, Casarosa knows well the fascination that his country arouses on the other side of the Atlantic and has offered a new trip, even for the hour and a half that “Luca” lasts.