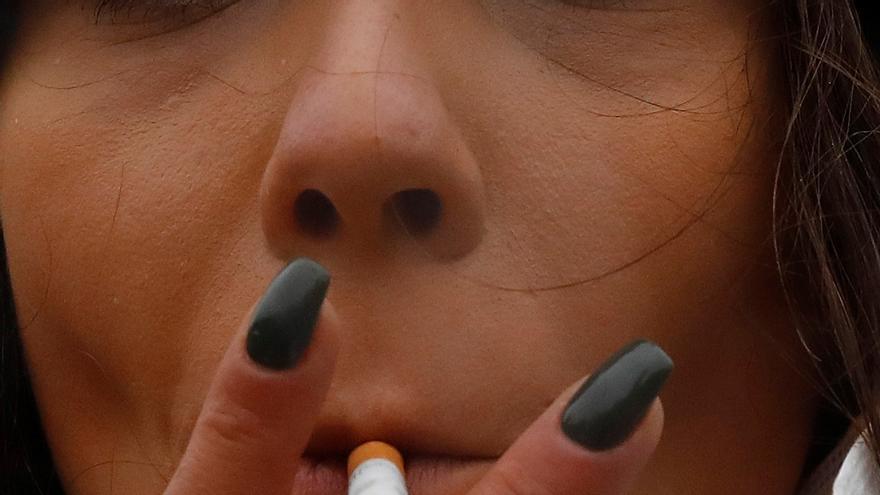 A smoke-free space. Neither at the doors of buildings, nor on the sidewalks, nor in green areas. Since September 1, the Universidad Carlos III de Madrid has prohibited smoking in the exterior spaces of the campus and this also includes the entrances and sidewalks. If someone wants to do it, they will have to go across the street. The students accept the measure, they understand that smoking is a problem and that, in addition, the smoke can annoy their non-smoking classmates, but many do not know what will happen if they are caught taking a puff or if they will be able to continue smoking during breaks. Many take advantage of the breaks, however brief, to hurriedly smoke a cigarette.

"Students who want to smoke will have to leave campus," says Iria Fernández, spokesperson for the Carlos III Student Critical Delegation. "It is true that in less than five minutes you can be out, at least on the Getafe campus, but it is still annoying because in class changes, which only last fifteen minutes, having to go out, smoke and return, especially for those who smoke rolling, it will be complicated, "says Fernández. "But it has not been traumatic or a major problem."

On the street, just before setting foot on the Getafe campus, people can be seen finishing a cigarette even on a rainy day. Some carry umbrellas and others take refuge in the canopies on Calle Velarde. "There has not been much mobilization, neither criticism nor anything from the student movement, but there have been many people who have complained individually," says Fernández.

The objective of this measure, as explained by the Carlos III University, "is to have an environment that is healthier and more sustainable" and also that people "become aware that tobacco is not good" and that other people " it can be annoying, "according to Salomé Abril-Martorell, manager of the Carlos III University. "Nobody can smoke anymore. This morning I went for a walk and I have not seen anyone smoke," he concludes.

The measure was approved with the unanimous support of all the Governing Council last June. "I don't know if there was an abstention," recalls Abril-Martorell. At the moment, they have only received one complaint, but from an email that they have not registered, so they consider that it does not come from the students or the workers.

Now students who smoke are looking for the nearest exit and lighting their cigarettes on the street, off campus. Some young people comment that it does not make much sense not to let them smoke in the gardens of the campus, where they consider that they can be more widely spaced. Having to go outside to smoke, everyone ends up doing it at the access points, glued to the door. "I understand it, on the one hand, but on the other, it seems a bit silly because I, who am in fourth, have never seen everyone smoking, that everything is full of cigarette butts or that many groups get together," he explains María, a law and political science student, as she finishes rolling a cigarette. "In fact, it seems to me that now there are more crowds at the exits. Large groups gather at the gates because in the end everyone goes to the exit to smoke," he explains.

"We have taken the measure well. In the end, it is the rules and the rules are the ones that mark a bit what we have to do. We have no choice but to accept them, go out and get a little wet," says funny Ángel, who studies twice degree in Journalism and Audiovisual Communication while finishing his cigarette. This Tuesday they had to get wet because in the break at 12:00 it did not stop raining.

Elena, another Law and Policy student, assumes the measure, but also considers that now there are agglomerations that were not seen before. "Not too bad at all [la medida] because tobacco is not good and I suppose that people who do not smoke mind. But I think that people are accumulating in the doors to smoke and in the end non-smokers swallow the smoke anyway and then I do not understand it. Being the wide campus, I believe that they could enable zones. Give some advice so that students do not accumulate at the doors ", protests along the same lines as María.

"Yes it is true that it is a bit striking that this restriction is applied now that it seems that the pandemic is subsiding, but above all that this restriction is applied but, for example, there are classrooms in which there is not a distance of one and a half meters among the students, "protests Fernández. "We suppose it is a matter of giving an image of a modern, smoke-free university."

The agreement of the Governing Council for the establishment of the "Smoke-free" campus is part of the fulfillment of the UN Sustainable Development Goals.

During the past year, they explain, they received numerous complaints from non-smoking students. "As a result of COVID-19, when it was shown that the virus could be transmitted by nearby tobacco smoke, we did have many complaints because people smoked at the entrances of buildings," says Abril-Martorell and that is why it was raised the idea of ​​permanently restricting tobacco throughout the campus.

"There are studies that show a worse evolution of the disease [COVID-19] in smokers and who indicate that smoking carries a 1.45 times higher risk of developing a severe form of the symptoms than in non-smokers, "they argue from the Carlos III University.

According to Ildefonso Hernández Aguado, SESPAS spokesman and former director general of Public Health of the Government of Spain, this is "one more step that this university is taking." "I see positive that progress is being made in removing smoke from all spaces. Above all, from training spaces, and it seems to me a positive measure, among other things, not only for people's health, but also to reduce the maximum contamination, "explained Hernández. Reducing exposure to smoke even outdoors, he argues, "normalizes the absence of tobacco and makes it much easier to quit smoking."

On the legal level, the University relies on the one hand on Law 28/2005, of December 26, on sanitary measures against smoking and regulating the sale, supply, consumption and advertising of tobacco products, amended by Law 42/2010, of December 30, which established in its article 7 the prohibition of smoking, both in public work centers, centers and dependencies of Public Administrations and Public Law entities and in educational centers, except in the open-air spaces of university centers, as long as they were not immediate accesses or surrounding sidewalks.

The idea in this case is to take one more step hand in hand with the principle of university autonomy, included in article 27.10 of the Constitution and developed in Organic Law 6/2001, of December 21, on Universities. "Legally there is a thing called the principle of university autonomy by which we have the power to self-organize and administer the university as we want in relation to the assets and spaces that the university owns, with which we are fully protected" adds the manager.

The expert Hernández Aguado believes that "perseverance" when taking measures against smoking is essential. "Tobacco is a problem for the objectives of sustainable development, for the whole of society", he adds. "Even if you have the freedom to smoke, when you have lung cancer or bladder cancer, we will pay for it together and I think it is very good that we pay for it together. But, at the same time, we ask those who smoke to keep in mind It takes into account these negative externalities of their consumption. As we also ask that they stop using the car in the center, "he concludes.

As for penalties for smoking, there is no clear idea among students. "They just tell you not to smoke inside and throw it away. I don't understand that there is any kind of repercussion," says Eva, who has taken advantage of a long break to go out to a sidewalk outside the venue, sit on a bench and smoke. "In the 15-minute breaks it is more complicated. I have seen some people smoking inside, but we are not going to die from not smoking in the 15-minute breaks either. We can hold on," explains this first-year Humanities student.

"They were talking about sanctions, but more of the incidence type, not financial sanction or, I suppose, expulsion. Well, I don't know. Because I do see that there are people who continue to smoke on campus," adds Elena.

The University, for its part, clarifies that the measure does not have a sanctioning objective but, rather, to raise awareness. "This agreement provides for a very residual sanctioning measure. So far the procedure is as follows: if they see someone smoking, there are guards at the university who warn them that they cannot smoke. There have been very few cases," says the manager. "What happens if someone says they don't want to turn it off, I want to continue smoking and I'm going to smoke three? Well, I don't know what will happen because we don't have it very planned yet. It would be a minor offense and if it is a repeat offender it could become serious".

"I hope we don't have to come to any of this," he concludes. From the University they emphasize that "they are very pioneers in this", being the first public university to apply it in Madrid, according to the manager, and they hope that it will help students reduce the number of cigarettes consumed throughout the year. day.

Tags: campus, out of, Rush, straws