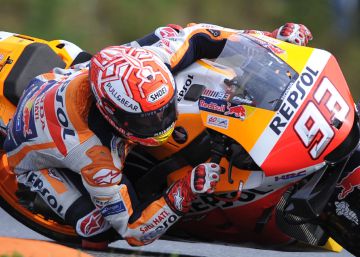 Marc Márquez Don't settle for being the fastest. Seek to crush. The leader of MotoGP World Championship has been done with the pole position of the Grand Prix of the Czech Republic after taking two and a half seconds to his immediate pursuer, Jack Miller. The Frenchman Johann Zarco has been third and Dovizioso, second in the World Cup, has been fourth to 2.8 seconds. From there to back, the opening opened by Márquez has already been three seconds. Márquez's has been a time, because of the distance he has taken from his rivals and the way he has done it: despite knowing he had the best time, he has continued to squeeze his Honda and skidding as if he were doing motocross with his brother and the gang of friends.

The rain has been the protagonist in the qualification session. The intermittent drip that has irrigated the Brno circuit has complicated the choice of tires and has tested the pilots' containment capacity. In the final section of the tanda, with a thin lane on the wet asphalt, the temptation was chewed in the box to put the smooth rubber and go buzzing to find the best time.

Márquez was the first to ride the slick, perhaps animated by a picket with Alex Rins. Advancements have been exchanged by touching the fairing and then searched again at the pit entrance. The Honda and the Suzuki were so close together in the workshops that Marquez has reached out to take Rins away, who hasn't even looked at him.

The encounter has had an effect of electric shock in the mood of the Honda rider, who has jumped again on the track, already with the flat tire, to mark the best time and open a world behind him. Seeing him squeeze his fist on the wet floor, his track engineer, Santi Hernández, struck himself in the head fearing that a minimum slip would leave 93 on the ground. Nothing is further from reality, his courage has catapulted him to the pole position, the 58 that is listed in the queen category, a record that leads him to tie with Mick Doohan.

FC Barcelona: The final of the Copa del Rey, that pending account

The Villa de Teguise Rally returns competition to the island