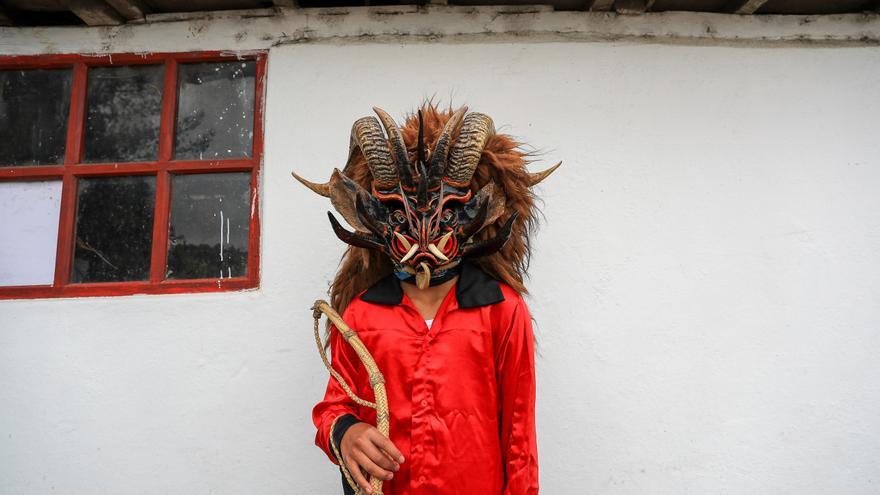 Quito, Jan 1 (EFE) .- The devils of Píllaro, an Ecuadorian city nestled in the heart of the country’s Andes, came out this Friday to dance live, in a virtual challenge to the coronavirus pandemic, which also threatened this traditional New Year’s celebration.

The devils, who usually go out to dance on January 1 for six days in the streets of Píllaro, today moved the celebration to the neighboring Huagrahuasi farm to avoid crowds and minimize contagion with the SARS-CoV-2 coronavirus.

Declared as Cultural Heritage of Ecuador, the “Diablada pillareña”, very similar to the Oruro carnival (Bolivia), was organized this time in total silence, so that people do not come en masse as has happened in other similar festivities.

And it is that we must not “lower our guard” in the face of the pandemic, according to the mayor of Píllaro, Francisco Yanchatipán, who led the celebration in Huagrahuasi, told Efe.

In total, 30 people appeared in the parade, between devils and line couples, who walked to the Huagrahuasi square under the gaze of video cameras for the broadcast on a virtual platform of the Pillareño Municipality.

The acceptance has been total, since the live broadcast of the show has had more than 200,000 visits, according to a source from the Municipality.

In total, 30 people have paraded representing seven neighborhoods of Píllaro, a number absolutely reduced to the thousands who have participated in previous years.

Devils, line couples and a village band included today the celebration that will be repeated on January 6, in a final tour whose stage is kept secret to avoid crowds, but which will be played live on the Municipality of Píllaro.

Today’s has been a “symbolic representation” that has been broadcast in real time so that “people can enjoy from home,” added Mayor Yanchatipán.

We hope that “next year the Pillareña Diablada will return” in person and “as God intended”, although if health causes still persist, “participation mechanisms” for the population will be sought, added the mayor.

Yanchatipán explained that despite the success of the Diablada on social networks, the fact that it was virtual has meant “a loss” for the Municipality, which in previous editions usually receives the visit of more than 10,000 tourists every day, attracted by the color of the devil masks.

The mayor remarked that next Wednesday another 30 people will participate in the parade that can be admired even outside the country through the Facebook platform, under the link “@gadmpillaro”.

The face of the devil that appears in the masks that the dancers use to dance for the new year in the streets of Píllaro, are made with paper, wire, paint and paste but, above all, with a lot of patience and adherence to a millenary tradition .

The devils along with the guarichas (young women) and the “officers” parade to the rhythm of drums and trumpets, while snorting and cursing in a sticky rhythm that scares and amuses.