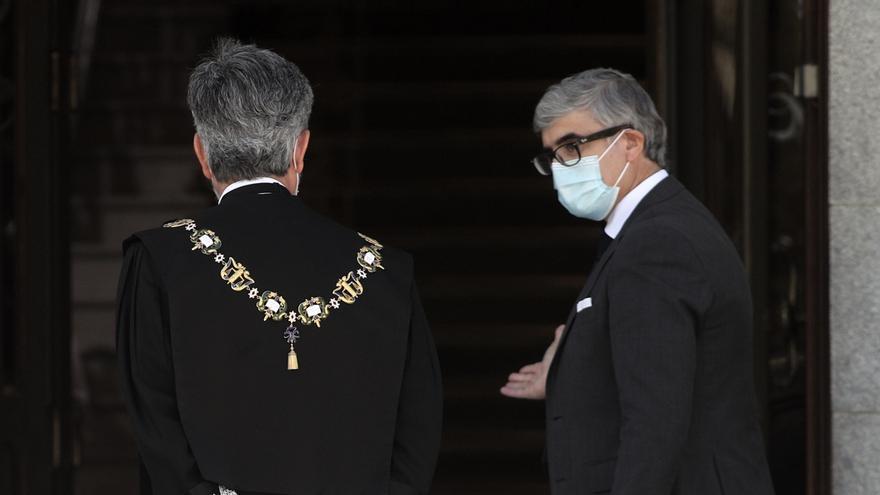 I would like to take the opportunity of this space to make some preliminary comments on the judicial reform that has been launched in Spain, at this very peculiar moment in our history *.

I will now present three initial comments in this area, leaving aside the question of the timeliness of reform, although it is also a noteworthy issue (and this is because: what is it that justifies such a reform? fundamental in terms of the organization of institutions, in the framework of such a critical situation in health matters, and in light of the difficulties that said crisis has thrown on other central spheres of public life, ie, education, housing?).

In the first place, I would point out that all reforms, but particularly those that concern the constitutional “rules of the game”, must be based on the broadest democratic agreement. This basic principle, as I understand it, deserves to apply both to the ways in which the reform of the case is carried out, as well as to the substance of the reform that is eventually implemented. And so, for the simple reason stated: it is reasonable that a particular government measure (ie, an economic plan) responds to a specific moment and conjuncture, and therefore depends on the prevailing circumstantial will (that is why we renew the legislatures periodically); but, for the same reasons (their nature and scope), long-term reforms (ie, those related to the democratic rules of the game) must be independent of circumstantial “mood swings” (that is why, for reforms of long-term, as is the case with the reform here under examination, the current regulations require longer processes and larger majorities).

For all that has been said, both the procedures chosen to carry out the reforms are worrying (via “a bill” instead of “a bill”, thus evading the control of the General Council of the Judiciary, the Council of State and of the Fiscal Council); such as the substantive orientation that the reform is intended to give (drastically reduce the current demanding majorities required for the election of judges – eliminating the 3/5 requirement, established under the reasonable conviction that such important appointments must rest on democratic agreements as wide as possible).

Constitutional erosion and presumptions of invalidity

The second point that I would like to make combines a criterion prevailing today in Political Science, with certain long-standing legal considerations. The criterion to which I refer has to do with a “political evil” that the Social Sciences have been presenting, in dozens of books and hundreds of articles, as a hallmark of our time: “constitutional erosion” (to which the teacher Adam Przeworski would refer as the backsliding democratic). The “constitutional erosion” would refer to the processes of “attrition from within” on the institutional system and, in particular, on the mechanisms of internal controls over the government. The phenomenon of the “sudden death” of democracy -typically, through coups d’état- would have remained typical of past decades, and is currently being replaced by repeated cases of the “slow death of democracy” (for return to the famous phrase of Guillermo O’Donnell), produced, in a habitual way, through powerful Executives, determined to eliminate, one by one, and gradually, the main institutional controls to which they appeared subject. Cases such as Poland, Hungary or Turkey exemplify these situations of “slow death” (or “death through a thousand cuts”), where each “erosive” step on democracy has the appearance of legality, but where the result is that is reached is one of lack of legality or serious illegality.

The phenomenon of “constitutional erosion” radicalizes a well-rooted concern within the law (and expressed, for example, in famous cases within North American jurisprudence, such as Carolene Products, of 1939). I am referring to a procedural concern (related to democratic decision-making procedures), which tends to express itself in “suspicions” regarding the decisions made by the government of the day in relation to the “rules of the game”; “strict scrutinies”, in the examination of the constitutional validity of such moves; and “presumptions of invalidity” as a first approximation to any change in the rules of the game that appears serving the “dominant player” (the government of the day).

This parameter of legal analysis, which the jurist John Ely enshrined in his study Democracy and Mistrust, has been gaining wide recognition within the academic community (for example, that of the well-known German philosopher Jurgen Habermas), through the simple and well-known way. based on that it proposes to “divide the work” between the different branches of government. The idea that this scheme proposes is that democratic politics enjoy wide margins of action on “substantive” issues, in front of which the judges must, in principle, be deferential; at the same time that it remains subject to the strictest and fulminant control every time that said dominant policy tries to change – in its favor – the “procedures” of the democratic game that is being played.

In short: there are good legal reasons to be very rigorous in examining the changes to be implemented on the rules of the democratic game, and much more – I would add – in these times, characterized by repeated attempts by governments to dismantle the constitutional controls to which they are or should be subject.

Finally, I would like to frame the previous comments – comments that call to view with skepticism and “legal suspicion” any change in the constitutional procedures that is not based on broad democratic agreements – in certain broader considerations, related to the type of institutional crisis that we are facing. going through. As pointed out in the previous point, contemporary doctrine has identified as a “problem of the time” that of “constitutional erosion”, which refers us, as we see, to the repeated movements of governments of our time, destined to dismantle, “from within “the system of” checks and balances “typical of most of our governments. I agree with this concern: it is a real, significant, and widespread problem. However, my impression is that our time faces an even greater “drama” or “tragedy”, linked (not so much with the constitutional crisis, but) with the “democratic crisis.”

The democratic crisis to which I refer is the one that manifests itself in events that are noticed in the most diverse latitudes; in countries of the West as well as of the East; in more and less developed societies: citizen “fatigue”; the “wear” of our representative systems; the “tiredness” that the population shows, in the face of authorities they do not believe in and governments they do not trust. Such facts suggest that we are in the presence, not of conjunctural problems (the “bad luck” of being governed, all and at the same time, by incompetent and corrupt public officials), but of structural factors, which have emerged in recent times, in the form of widespread “political boredom.”

I understand that there are many causes of what has been called “democratic fatigue”, but here I would focus only on one of them. I am referring to the structural incapacity shown by our representative institutions -created for small, few, divided into few groups, internally homogeneous- to account for the endless diversity of demands typical of societies such as the current -diverse, “multicultural”, characterized (in the words of John Rawls) by the “fact of pluralism”.

To put it bluntly: the old dream of “full representation” has died, and has definitely died. That dream (which came from Antiquity, and was reflected in the idea of ​​a “mixed Constitution” capable of incorporating “all orders” of society – the aristocratic, the democratic, the monarchical) no longer has a reason to exist. At present, the ideal of integrating, constitutionally, “large owners” and “small owners” is inconceivable; debtors and creditors; merchants and farmers. The present societies are infinitely more diverse than those of centuries ago, and -at the same time- each one of the groups into which our societies are divided appear as fundamentally heterogeneous (hence no “woman” can represent the collective of women. Neither “worker” to all “workers”, nor any “indigenous”, in countries with indigenous presence, will be able to represent the point of view of all indigenous groups).

Beyond the problems of an unattractive political “staff”, we find today with constitutional structures prepared for another era, and destined to address other problems. Today, our “constitutional suit” appears too “narrow”: absolutely incapable of collecting, in a moderately acceptable way, the infinite existing social variety. That is why our political staff are faced with problems that are difficult to solve: they represent very few, only occasionally, and badly.

I point to the latter as a way of accounting for the dimension and type of criticism that interests me to advance in the face of the judicial reform under review. And it is that -as I said- no reform is justified if it is not framed in a vast democratic agreement. But – I would like to emphasize now – the type of agreement that I think is needed – and the one that I am suggesting here – is not one that is limited or concentrated in a bipartisan agreement; Nor is the agreement required by the European Union, or part of the Spanish opposition, that is, an agreement that covers the Venice Commission, the General Council of the Judiciary, the Council of State and the Fiscal Council. As I understand it, within the framework of the crisis of representation and democratic crisis that we are suffering today, the fundamental agreements must be agreements that above all appeal, and have as a protagonist, the citizens of Spain themselves. As I understand it, in Spain (as well as in my country, Argentina, without a doubt), the current problems of constitutional democracy require less “top-down agreements” and pacts between bureaucratic elites, and much more (instead, and finally ) of a “conversation between equals”.

*I am referring, of course, to the proposal of the PSOE and United We Can that would allow the absolute majority of Parliament to elect the majority of the members of the General Council of the Judiciary (CGPJ).