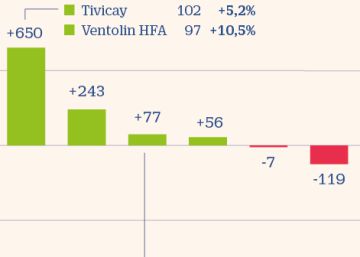 Pharmaceutical companies are also not immune to the negative impact of Covid, despite being in a better situation with respect to sectors such as tourism or the automotive industry, since they have continued and increased their operations as they are an essential sector in the pandemic. A recent report by the consulting firm Evaluate Pharma reveals that the 15 leading companies in sales in the industry expect losses of $ 4.9 billion (about 4.17 billion euros) this year due to global lockdown measures derived from the coronavirus crisis .

The lower prescription of drugs due to the decrease in medical visits due to social distancing, quarantines and restriction of mobility affects this forecast of decrease in income, explains the document published in July and that includes forecasts for 2020, the variation Estimated between March and June, and in 2026. The cancellation of routine operations, less attention to chronic patients or the delay in the start of new treatments for the same reasons also influences this.

Chronic, another of the affected areas in the short term

“The Covid pandemic has cast a long shadow on the pharmaceutical industry, which is struggling to find treatments, as well as on all the citizens of the world, who are adapting to new ways of life and work. Its long-term impact on the biopharmaceutical industry is still unknown, ”the report highlights.

The german Merck It will be the most affected, according to the firm, since a drop in sales of 1,250 million dollars (just over 1,000 million euros) is expected. “About two-thirds of this company’s pharmaceutical revenue is derived from products administered by physicians,” he says. The predicted crash in its flagship drug Keytruda alone is $ 448 million (380 million euros).

They are followed by Pfizer, Bayer, Roche, Sanofi, Abbvie, Novartis, AstraZeneca, Amgen, Bristol-Myers Squibb and Johnson & Johnson. In the case of Switzerland Novartis, the biggest cut in demand is looming in its ophthalmology area, with forecasts of decreases in its drugs Beovu and Lucentis, both for age-related macular degeneration, of 185 and 103 million dollars (157 and 87 million euros), respectively.

Analysts anticipate a similar effect on the best seller Humira, for rheumatoid arthritis, from the American Abbvie, when forecasting 278 million less (236 million euros) and in Mavyret, for hepatitis C, 203 million (173 million euros), he highlights.

The Swiss Roche, despite reporting in the first quarter of a drop in income in its chronic and cancer unit, analysts have revised upwards (255 million euros) for the end of the year the sales of its anti-inflammatory Actemra, used for the rheumatoid arthritis but now being tested in patients with severe Covid pneumonia.

GSK, Lilly, Gilead and Takeda, on the other hand, will be the least affected by the epidemic. Evaluate Pharma highlights, on this point, the American Gilead, whose sales increased in the first quarter of the year thanks to the good performance of its HIV portfolio following the increase in reserves, and the strong acceptance of Biktarvy, against hepatitis B, with a forecast increase of 788 million dollars (670 million euros). In May, the company obtained emergency approval from the FDA (US regulator) of Veklury (remdesivir) for Covid, another source from which an increase in income is expected.

And the british GSK, which, thanks to the epidemic, has seen an increase in the consumption of its Ventolin HFA and Tivicay, for HIV, with forecasts of an increase of 97 and 102 million dollars (83 and 87 million euros), respectively.

Due to pathologies, the loss of money is concentrated in the areas of the central nervous system, oncology, musculoskeletal ailments, blood and endocrine diseases.

Despite a more turbulent environment in the short term, Evaluate Pharma estimates that prescription drug sales will grow 3.7% this year, to $ 904 billion (769 million euros). And that in 2026 it will reach 1,400 million dollars (1,190 million euros) due to the impulse of innovative therapies, which will drive growth.