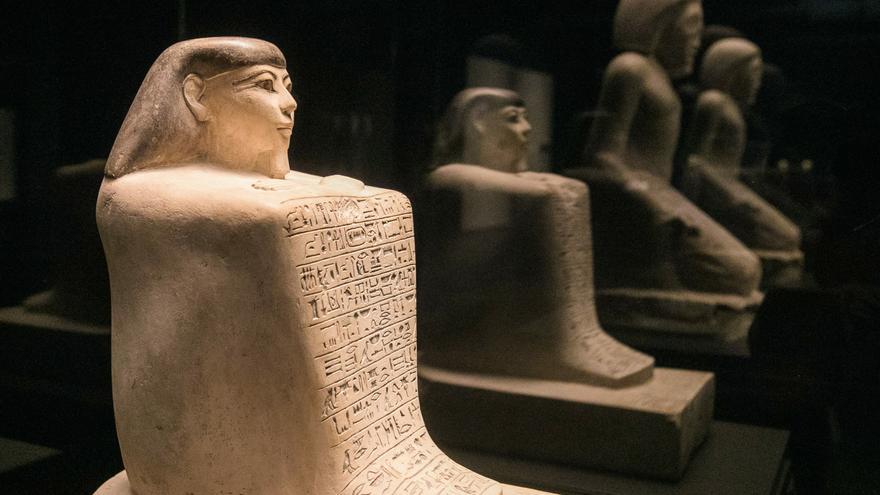 Zaragoza, Sep 15 (EFE) .- ‘Pharaoh. King of Egypt ‘, the third in a series of four exhibitions organized by the British Museum in collaboration with the’ la Caixa ‘Foundation, delves into the ideals, symbolism and ideology of the Egyptian monarchy, but also reveals what lay behind of your images.

This 137-piece exhibition that has been traveling through different world exhibition spaces since 2011 arrives at CaixaForum Zaragoza and will be open to the public from this Wednesday, September 15, until January 9.

The director of CaixaForum Zaragoza, Ricardo Alfós, has presented this new exhibition together with the curator of the Department of Egypt and Sudan of the British Museum, Marie Vandenbeusch, who has intervened electronically.

Alfós has highlighted that with the inauguration of this exhibition on the pharaohs in the new season, together with that of ‘The American Dream. From pop to today ‘, also with funds from the British Museum’s collection, more than 5,000 years of history will coincide in the space of the Aragonese capital.

“The fascination for Egypt and its history never ends. The more we know, the more we want to know, and the more it has been seen, the more we want to see,” said Alfós, who recalled that they are still being asked about the first exhibition in this series , ‘Egyptian mummies. The secret of eternal life ‘, which could be seen shortly after the inauguration of the Zaragoza venue in June 2014.

‘Pharaoh. King of Egypt ‘explores the symbolism and ideology of the Egyptian monarchy, while trying to reveal the stories of the objects and images that this ancient civilization has left as its heritage.

There were hundreds of gods that were worshiped in ancient Egypt, and it was believed that all maintained some link with the pharaoh. Ancient myths explain that, before the first pharaoh, Egypt had been ruled by the gods.

As high priests, the pharaohs oversaw the construction of grandiose temples for the performance of rituals. Royal burials, under the pyramids or in the Valley of the Kings, were conceived with the intention of guaranteeing the rebirth of the pharaoh as Osiris, lord of the underworld or world of the dead.

Alongside this divine nature, the pharaoh was also often depicted as a fearless warrior or a genius of military strategy, ruthless with his enemies. He commanded the armies with the mission of maintaining internal peace and expanding the borders.

However, Egypt suffered numerous and painful defeats, among others, against the Roman and Nubian armies. Likewise, despite his role as lord of the Two Lands, the link between the north and the south of Egypt, the pharaohs could not avoid strong internal tensions. Egypt experienced several civil wars and was conquered by foreign powers or ruled by different sovereigns who were vying for power.

Through statues and monuments, the pharaohs painstakingly constructed their identities, projecting an idealized image of themselves, either as mighty warriors, protectors of Egypt against its enemies, or as fervent worshipers of the gods, intermediaries between themselves and themselves. the rest of humanity.

After these representations of royalty, however, the reality was much more complex. Not all the rulers of the country were male, nor were they Egyptian, such as the Macedonian king and ruler Alexander the Great. There is also evidence of regicidal conspiracies, and even coups d’état.

The exhibition is divided into nine areas in which it examines the figure of the Egyptian monarch from all points of view: as a divine being, located in the center of the social structure, around which symbols and beliefs that go beyond earthly existence; in his palace life, surrounded by his family; as a ruler and as a warrior, and even highlights that the origin of the pharaohs was not always Egyptian.

The exhibits allow one to appreciate the multiple skills of ancient Egyptian artists, and are a testament to the image that the pharaoh wanted him to convey of himself.

Marie Vandenbeusch explained that the exhibition is a mixture of objects and elements that are known with others that “are not so common” and that it is not approached from the chronological aspect, but thematic, and is divided into “nine areas of influence”.

Key objects in the exhibition include the head of Pharaoh Tuthmosis III; the statue of the god Re-Horakhty; the figure of the pharaoh Mentuhotep II; the relief of a temple of the pharaoh Ptolemy I; tiles from the palace of Ramses III; the head of Alexander the Great or the tablet with the text of a missive from a Babylonian king in cuneiform script.

As a complement to the exhibition, a cycle of four conferences will take place between October 7 and 28 -as a novelty, a conference on November 13 dedicated to families- and guided tours on Thursdays and Saturdays at 6:00 p.m. and Sundays at noon.