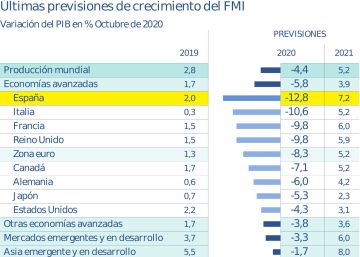 The announcement of the existence of a successful vaccine to fight Covid-19 anticipates, with all possible caution, a change at the helm of the world economy. After 2020 that will go down in history as the year of the Great Lockdown, the publication of preliminary data by Pfizer and its German partner BioNTech opens the door to glimpse a future recovery in economic activity.

“The Pfizer announcement puts a deadline for this nightmare,” says Raymond Torres, director of economic and economic affairs at Funcas, for whom the possibility of a vaccine implies that in addition to the “direct effect on the economy, there is an indirect effect on consumption and investment given that there are decisions that have been postponed, so this can have a relevant impact on confidence ”.

Valentín Pich, president of the General Council of Economists, considers that the worrying thing would be to reach “the final stretch of this year without a glimmer of hope.” In his opinion, “the more the light, the faster the rebound, considering how dangerous discouragement can be for so many months.”

In recent months, the mantra repeated by economists has been that the evolution of economies would depend on how the pandemic progressed, the incidence of the second wave and the restrictions on mobility that the different governments had to set. Now, the successful results of the tests carried out by Pfizer paves the way to the long-awaited return to normality, or the new normality.

The pharmaceutical company assured that it plans to request authorization for the use of the vaccine from the United States authorities at the end of this month and that it aims to distribute 1.3 billion doses next year – 200 million would be for the European Union, although there is still no signed agreement – so this new normal is not expected to occur this year. In this way, no change is expected in the economic forecasts of international organizations for this year, as it could happen for the second half of 2021 and 2022.

Despite the fact that the race to find the vaccine against Covid has accelerated its pace, the truth is that the evolution of the final stretch of 2020 may be aggravated by the new restrictions imposed in not a few countries due to the rebound in cases. “None of this changes the fact that in the short term the world economy is facing a challenging winter,” ING analysts said yesterday. From the entity they see it probable that the restrictions of the hotel industry will cause a fall of close to 2% in the GDP of the euro zone in the fourth quarter of the year, while the risk of new restrictions in the United States will mean a considerable brake on the activity in the country.

Thus, yesterday the Organization for Economic Cooperation and Development (OECD) advanced that the advanced indicators point to a continuous moderation in growth, although it warns that these indicators could be weighed down by measures to limit mobility and that there will be to wait for the November data. For now, in the case of Spain, the advanced composite indicator published monthly by the OECD, and which indicates in advance changes in the economic cycle, stands at 93.9 points in October, far from the 100 points that mark the long-term average.

In this sense, Torres predicts that in the short term, Pfizer’s announcement “will not influence much because we are in full relapse. The PMI indices for September and October have not been good and taking into account the new restrictions on activity it is possible that the final stretch of the year will be negative ”. A situation that would drag on to the first quarter of 2021. “It is difficult to prevent 2021 from starting on the wrong foot,” points out the director of the economic situation and international economy of Funcas, for whom what would have more effect is the containment of outbreaks.

From ING they assume, for their part, that “it will not be until mid or late 2021 when growth returns consistently to many economies.”

More moderation has been shown by the European Commission, which last week estimated that world GDP will rebound by 4.6% next year and 3.6% in 2022 and that the euro zone economy will rise by 4.2% on next year and 3% the next.

“The vaccine can have a positive effect from the second half of 2021,” says Torres, who also points out that for Spain it would be positive for the vaccine to be marketed in many countries “due to our country’s dependence on the arrival of tourists foreign”.