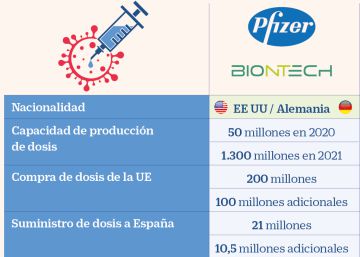 What vaccine are you going to get to get immunized against the coronavirus? The short answer is that you will not be able to choose. The long version is that it will depend on a host of circumstances regarding which ones are authorized in Europe, the industrial capacity of the manufacturers, the European supply contracts and the vaccination schedule for groups that the Government designs.

At the moment, the alliance vaccine between Pfizer and BioNTech like the AstraZeneca. It is expected that the first doses of both initiatives can be distributed in Europe at the end of December and on a larger scale from the first quarter of 2021. In that race they follow Modern, Janssen, the consortium of Sanofi and GSK Y CureVac (see graph).

For the moment, these are the companies that are going to distribute in Europe, since they are the only ones that have reached advance purchase agreements with the European Commission, to which the Member States adhere, as in the case of Spain. Only in the case of Moderna, the Executive of Ursula von der Leyen has not finished signing the contract. The countries can add other acquisitions to alternative companies, but at the European level it is not being done, since the centralized negotiation has been transferred to Brussels. Likewise, contracts for advanced candidates designed by Novavax, Medicago or the giant Merck Sharpe & Dohme (MSD) could be added in the future.

With these contracts, the EU has already reserved at least 1,305 million doses, but to which an optional 660 million can be added. By the proportional distribution with respect to the population of the country, Spain would have between 137 and 206 million vials if it is added to all commercial pacts.

Apart from these contracts, logically, the first vaccines to arrive will be the ones that are most advanced in the research process. In this section there are three initiatives: the North American Pfizer and the German BioNTech; the British AstraZeneca together with the University of Oxford, and the American Moderna. In these three cases, the European Medicines Agency (EMA) carries out a continuous evaluation of these trials to proceed with an almost automatic authorization as soon as sufficient medical data on efficacy and safety is available, something that could happen in the coming weeks.

Pfizer and BioNTech are leading that race, since this Wednesday they announced that they have concluded phase III (the last stage with thousands of volunteers before authorization) with an efficiency of 95% and that they anticipate distribution in Europe before Christmas. Moderna also reported last week a preliminary efficacy of 94.5%. Its distribution could arrive in the first quarter of 2021. AstraZeneca is expected to offer efficacy data shortly and to begin distribution in December if it receives the approval of the EMA first. Salvador Illa, Minister of Health, already pointed out last month that he expects 3.1 million doses of this pharmaceutical for next month.

They go one step behind Sanofi (which expects to reach an authorization in the first half of 2021); Janssen (first trimester), and Curevac (third trimester). But in the case of the first two, what they would contribute to this race is a significant jump in large-scale production thanks to the manufacture of 1 billion doses a year each.

In fact, one of the determining factors on which solution will be injected to each citizen is not only which one is authorized, but whether it is initially available. For this reason, when the Government decides what the vaccination schedule will be by groups and ages, it is expected that during the first months the available solution (Pfizer and AstraZeneca) will be injected without even the Administrations being able to choose other criteria such as price or ease of storage. Ugur Sahin, CEO of BioNTech, confirmed this Wednesday that any alternative will be welcomed with relish: “I really do not expect a competitive situation during the first nine months because every dose of approved vaccine that anyone can supply is welcome and will probably be used.” He also advanced that he hopes to have a new formulation of his product in 2021, since now it has the disadvantage of a distribution at 75º below zero.

Therefore, as the calendar progresses, for the Spaniards who are the last to be vaccinated, it is foreseeable that there will be a greater range of options.

All these companies are manufacturing vials simultaneously with their R&D with the aim of having millions of doses prepared when they receive sanitary authorization, although the great industrial leap is not expected until the second half of the year. The success of large manufacturers such as Pfizer, Sanofi, MSD, AstraZeneca or Janssen would be crucial for vaccines to reach health centers on a massive scale.

The vaccines that foreseeably will not arrive, at least not expected in the coming months, will be the Chinese or the Russian. These projects should previously request marketing authorization from the European Medicines Agency (EMA) to proceed with the evaluation of the trials carried out in other territories. “It is not absolutely necessary that there be tests in the EU, but it is necessary for companies to follow the regulatory procedures that guarantee the quality, safety and efficacy required in our territory”, Health sources explain. Nor has the European Commission negotiated a supply contract for these alternatives.

Hungary, which has Viktor Orban as prime minister, has raised a controversy within the EU by advancing that it will negotiate the purchase of the Russian vaccine Sputnik V. That contract would be carried out outside the set of 27 and the Commission has already warned of the risk which involves vaccinating the Magyar population without following the strict controls of the tests by the EMA.

Given the enormous need due to the health and economic problem caused by the pandemic, price will not initially be a determining factor once the European Commission has already signed the contracts. But in amount, AstraZeneca is far apart, since its vaccine (two doses for 5.9 euros in total) is by far the cheapest, so in the medium term it may be a relevant factor for the authorities.

Currently, the department of Salvador Illa has not communicated the vaccination criteria, since it is debated in the Interterritorial Council in which autonomous communities participate, and which is joined by scientific societies, experts in bioethics, the Spanish Association of Vaccination and experts in mathematical models. But the minister has been advancing some ideas that they should first be administered to the elderly, health professionals and other risk groups.