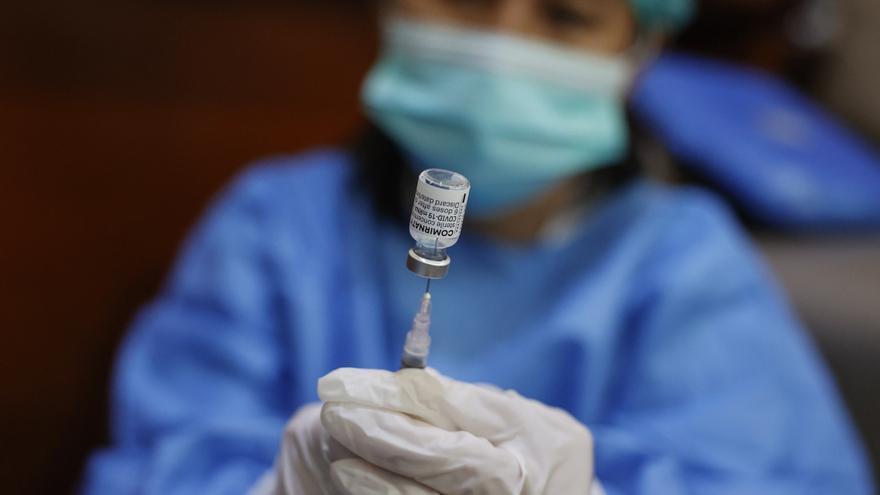 The CEO of the pharmaceutical company Pfizer, Albert Bourla, considers that "we will soon be able to return to a normal life" and leave behind the worst of the COVID-19 pandemic. Bourla, in a interview granted this Sunday to the French newspaper The Figaro, has calculated that this moment may come "in the spring" and has entrusted it to "the tools" that "tests, vaccines and first treatments". The last two of those tools are manufactured and marketed by Pfizer.

The American pharmaceutical company, whose vaccine against COVID-19 accounts for more than half of all doses acquired and administered in Spain and 60% of the purchase agreements of the European Commission, expect to double their income in 2021 compared to the pre-pandemic level. To this we must add the launch of the antiviral treatment Paxlovid, which is being evaluated by the European Medicines Agency but has already received the go-ahead for emergency use. The President of the Government, Pedro Sánchez, announced on January 10 that The purchase of 344,000 doses of this antiviral is already committed.

Before the end of 2021, the company revised its calculations and raised the sales forecast to exceed 70,000 million euros, reflecting "both the results of Comirnaty [la vacuna contra la COVID-19] like the rest of the business lines", described the company in its Financial Guide for 2021. In fiscal 2019 and 2020, Pfizer reported revenue of €35 billion. The final figures for last year will be known in February.

The manager of the pharmacy commented that they feel "proud of our results in the third quarter of the year [cerrado definitivamente], but we are even more proud of what these financial results indicate in terms of the positive impact we are having on human lives around the world."

Of course, the action of all the vaccines against COVID-19 has been a crucial tool both for saving lives and preventing serious cases of infection. In Europe, these drugs prevented more than 470,000 deaths in people over 60 years of age, 90,000 of them in Spain, since they began to be used until November 2021, according to a study by the World Health Organization and the ECDC. "Without the vaccine, the situation would be completely like March 2020," experts told in early January with the sixth wave and the omicron variant multiplying by far the cases in Spain, although with a very different impact in serious cases and deaths.

Although the most widely used vaccine in the world is that of Oxford-AstraZeneca, the Pfizer product has prevailed, at least, in the rich world. And that has to be counted in the accounts. The price of the product varies depending on who buys it: the African Union pays an average of 5.9 euros per dose, South Africa or Brazil 8.5, the US about 17 euros and the European Commission between 12 and 20 euros, according to the UN compilation. If the first is injected in 182 countries, the second is applied in 151. Sinopharm comes on that list with 86, Moderna with 85 and Janssen with 80 states.

But the image crisis that AstraZeneca suffered above all in the European Union –which buys from Pfizer with the highest prices– caused the American brand to see how its orders multiplied. Cases of Adverse effects of AstraZeneca's product (very rare) led to restrictions on its use and thus cleared the commercial path for Pfizer.

The booster dose strategy that the same pharmaceutical company put on the table last July by announcing that a third puncture "six months after the second obtains five to ten times more neutralizing antibodies for the original variant and the beta of the virus" and generated defenses against the delta, it has ended up being generalized in the rich states. Even more after the arrival of ómicron: Spain certified last Thursday that there will be reinforcement for all people over 18 years of age. Even so, those extra orders will not fatten the income of the year just ended.

All in all, Pfizer now calculates that Comarty will ultimately provide it with €31 billion in sales in 2021 with a profit margin of over 25% – before taxes. At the start of the year, the company posted revenues of €12 billion for its flagship product against COVID, 2.5 times less. At the same time, he predicted that the demand could last for years.

The upward revision is based on "additional supply agreements that have been signed since July." The order patterns with which the pharmaceutical company works indicate that 2021 would close with the delivery of 2,800 million doses. In fact, in the first nine months, with data already closed, Pfizer entered a total of about 49,000 million euros, 91% more than in the same period of 2020.

Meanwhile, the problems of access to vaccines in impoverished countries continue to be pressing: doses have not arrived to cover the population; Bottlenecks have remained and an agreement has not been reached to temporarily suspend vaccine patents and thus multiply production.

Last October, a new round in the World Trade Organization to try to provisionally lift patents failed. Only a month later, Europe was trying to shield itself from the emergence of the omicron variant detected in South Africa. At those moments there was more population, concentrated in rich countries, with a third dose than people with some dose put in the poorest states. The situation has not changed much and, despite the shielding, in just one month, omicron was already the variant of SARS-CoV-2 detected in 47% of the analyzes carried out in Spain.

The World Health Organization launched the COVAX program to ensure that countries with few resources have vaccines and avoid cases like the one highlighted by ómicron: whether the virus circulates massively in large unvaccinated populations may vary. The program has not succeeded in generalizing complete vaccination in the most disadvantaged part of the world.

According to UN data, COVAX has secured 2.1 billion doses, although it has supplied 987 million to 144 countries. The European Union, for example, has insured more than 3,000 million. The medical director of Pfizer in Spain, Juan Álvarez, defended the profitability of his company at the end of November 2021 and stated that "to continue researching, pharmaceutical companies need income".