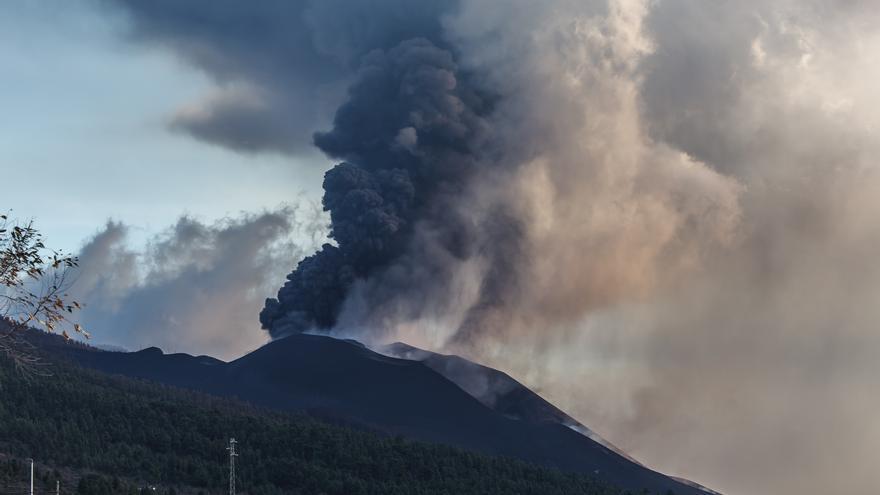 Air quality levels remained within the safe threshold. However, despite not exceeding safe levels of sulfur dioxide, the director of Pevolca, Miguel Ángel Morcuende, acknowledged that in the last few hours “there has been a clear problem with the amount of suspended particles.” “As long as the winds from the south and southwest components are maintained, it will be necessary to use a FFP2 mask on the street and it is best to stay at home,” he specified about the five locations with a recommendation for confinement. Also, especially sensitive people should wear goggles outdoors.

This circumstance joined yesterday to a considerable increase in the levels of ash emission from the Tajogaite volcano. In fact, this eruptive phenomenon was branded by experts as the “most remarkable” of those that occurred during the Sunday day. The ash cloud thrown completely covered the northeast region of the island, leaving some impressive images for history. These ashes were accompanied by large explosions that could be heard many kilometers from the cone. «This episode could be caused by intense degassing. There were also volcanic rays and shock waves associated with the most energetic explosions, ”they detailed from Pevolca.

Homes, roads and all kinds of infrastructure in the municipalities of Tijarafe, Puntagorda and Garafía were almost completely covered with an impressive black cloak yesterday. Until now, and according to the neighbors, so much ash has never reached that area of ​​La Palma. Neighborhoods such as Cueva de Agua or Santo Domingo, belonging to Garafía and located on the northern coast, also suffered the ravages of this intense ash cloud.

In fact, the appearance of large layers of ash forced the Cabildo de La Palma to launch a recommendation directly related to road safety. The institution issued a message requesting “special attention” to drivers who circulate in the Aridane Valley. He did so through his social networks while updating some data on the situation of the laundry. The most active continues to be the one that reached the Las Hoyas neighborhood on Saturday, a place where she is detained without advancing to the sea for the moment. “The laundry continues with the same directions as the last report,” Pevolca pointed out. As of yesterday morning some of the volcanic tubes and channels had overflowed but there was no progress from the active lava fronts, at least in the last 24 hours. At the moment, and until the last minute, air traffic was operating normally throughout the Tenerife province, as confirmed by Aena sources. At La Palma airport, work was carried out normally during the day.

Meanwhile, the entry and exit accesses to Puerto Naos, in the municipality of Los Llanos, remained open. In fact, yesterday evacuated residents who wanted to collect more belongings were able to access the area. However, those from the La Bombilla neighborhood, a town too close to one of the main washes, could not carry out this task.

From the Cabildo Palmero recalled that in order to remove belongings from the houses it is necessary to present the DNI and a document that proves the ownership or rental of the property to which it is intended to access. The owners of farms in Puerto Naos, Charco Verde and El Remo must make an appointment if they wish to irrigate. Likewise, and to facilitate the work of the security teams, it is recommended to access the Llanos and Tazacorte by the path of the slopes of El Paso or Hermosilla.

Throughout the day, a multitude of seismic movements took place on the island, among which one stood out, around 5:52 p.m., which reached a magnitude of 5 and could be felt intensely in Los Llanos. According to the data registered by the National Geographic Institute (IGN). The earthquake occurred at a depth of 38 kilometers to the southwest of Villa de Mazo and was equal in strength to the one that until now had been the strongest of all those recorded during this volcanic crisis. It was on Saturday and it also reached a magnitude of 5. It could be felt in places as distant from La Palma as the Tenerife town of Candelaria. In other words, in the last two days the two strongest tremors have been registered since this volcanic crisis began, which shows no signs that it will subside anytime soon.

Finally, according to the latest data from the Copernicus satellite system, there are 2,562 buildings destroyed and another 246 are at serious risk. In addition, 280 hectares of crops have suffered damage, most of them vineyards.