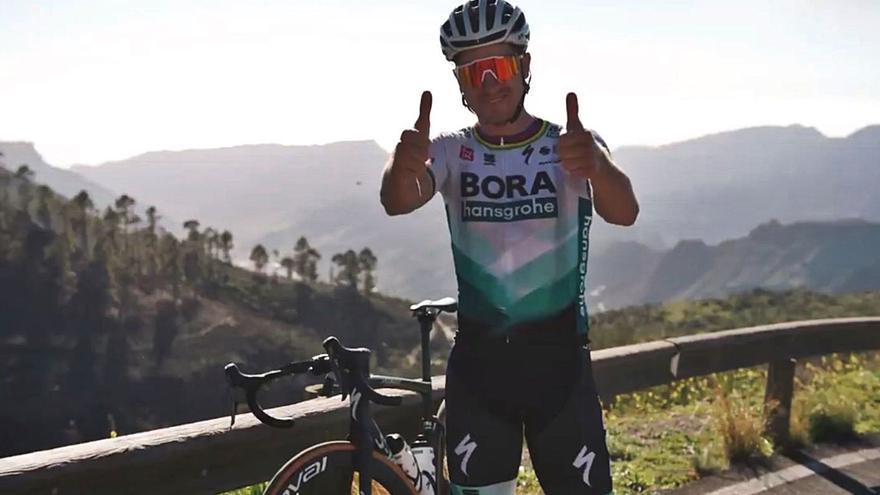 The reason: Peter Sagan ‘hit’ it in Gran Canaria. The German Bora-Hansgrohe rider has chosen the island to ride for a few days as part of his preseason. “Hello guys! I would like to thank you for the good wishes you have sent me. I had a wonderful six hour ride in this beautiful weather. On my return I had some new scars on my body, but hey, I’m still alive. So that’s good, ”Sagan said with his characteristic smile in a video that he uploaded to his social networks from Gran Canaria while showing his bruised elbow and legs.

“I don’t know if I should consider those scratches a birthday present. The truth is that I will remember this day for a long time, ”said the Slovak. A scare for a team that has been more than a shock in recent days.

Sagan’s fall on the Gran Canaria asphalt is an anecdote compared to what happened to the Bora-Hansgrohe a couple of weeks ago in the Italian town of Peschiera del Garda. There the German team suffered a multiple run over that took seven riders ahead. Wilco Kelderman, Rüdiger Selig and Andreas Schillinger were taken to hospital. The first had a concussion and a fractured vertebra; the second, another concussion, but no fracture; and the third, vertebral fractures in the cervical and thoracic spine. They all left the hospital and have already started their recovery.

The team planned to continue with its preparation in Gran Canaria as a complement to that first part in Italy. The accident partially disrupted their plans, although part of the team did travel to the island for a few days. Among them, Peter Sagan, the most popular face of Germans. The cyclist from Žilina, in northern Slovakia, has 117 victories as a professional. Numbers that have earned him to finish seven times with the green jersey of the Tour de France, which highlights the place of arrival at the finish line and not the final total time.

But above all else, the versatile Peter Sagan is the rainbow racer. His three consecutive world titles on the road from 2015 to 2017 light up a record that has toured Gran Canaria. Almost nothing. The season for Sagan opens, if nothing changes, in less than a month with the Omloop Het Nieuwsblad in the Flanders region. Then another one-day race awaits him, the Kuurne-Brussels-Kuurne that he already won in 2017.

Along with Sagan, the German Emanuel Buchmann also left his signature on social networks of his time in Gran Canaria. “There is no Mallorca Challenge this year and that means more days of training in the sun,” he wrote on Instragram along with a photo of his bike on Pico de las Nieves with Roque Nublo and Teide in the background. Now the Bora continues with its tuning in Alicante. For now, Peter Sagan adds another year to his account. Some 31 in Gran Canaria difficult to forget.

Gran Canaria is set as a preseason destination for some of the best teams in the world. The Ineos Grenadiers once again chose the Island as a place to establish a training campus. Geraint Thomas, winner of the 2018 Tour de France, and Tao Geoghegan Hart, king of the 2020 Giro d’Italia, trained with the British team for several days. Along with them, other illustrious members of the squad such as the Poles Michal Kwiatkowski and Michal Golas, the Spanish Jonathan Castroviejo or the Russian Pavel Sivakov, among others. In addition, during the last days the Italian track cycling team also exercised on the Island. At the end of last year, Mikel Landa, from Team Bahrain, also passed through Gran Canaria, as the Danish cyclist Cecilie Uttrup Ludwig. |

From Ineos to the Italian national team

Atlético resists the final arreón of the Real