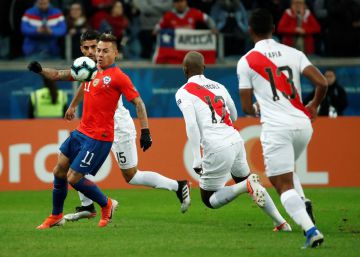 Peru did it again. After suffering against the powerful Uruguay to defeat her in the roulette of the penalties, the team of Ricardo Gareca sent to the canvas the bicampeona of America. Peru played an intelligent game and thrashed Chile in Porto Alegre (3-0). The Inca team will play the third final of their history against Brazil in Maracana. He has a history of luxury, his other two decisive matches he won. Of course, you have to rewind a lot of tape. He conquered the Cup in 1939 and in 1975. Chile, meanwhile, will face Argentina on Saturday in Sao Paulo in search of the bronze medal.

Without the mystique or the pedigree of the rivalry of the Rio de la Plata, between Uruguay and Argentina, of course without the worldwide repercussion of the duel between the Albiceleste and the Canarinha, the classic of the Pacific keeps stories of shamans, painted and destroyed buses. And an extra additive: in Chile they speculate that Peruvians and Colombians agreed to a draw in the last qualifiers for the World Cup, a result that left the Red outside of Russia. In the National Stadium in Lima a group of shamans were called to perform "the flowering rite" and thus counteract the one that had already been consummated by their Chilean counterparts. Less dangerous, in any case, than when in 1998 the supporters of La Roja received stones from Peru's coach, vandalism to which the Inca team's support was added in 2002. From the aggression to the mockery, the Chilean players left a message in the dressing room of Lima in 2018: "The champion of America passed by here".

The recent past revitalized the duel between Chile and Peru, two teams that seek to redefine their history in South America. The Red arrived in Porto Alegre in search of its third consecutive final in America, while Peru, which since Gareca sat on the bench revitalized, wanted to return to the final after 44 years. The Inca selection, starting, was planted better in the field. Quiet, as if the pressure to reach Maracaná was only for Chile, Peru moved the ball with pause for the rhythm to put Advíncula. Gareca's team has a striker like Paolo Guerrero, able to protect any ball, intelligent to associate with Flores, Yotún and Cueva.

Chile was not comfortable. Pulgar tried to keep calm in a midfield that succumbed to the organized Peruvian pressure. Cueva warned, responded fast Chile with the depth of Beausejour, until Flores took a strong left-footed shot, after a corner kick to destabilize the Red: 1-0. Chile was not ordered in attack or defense, each kickback of Peru was a headache for goalkeeper Arias. And it was, precisely, the goalkeeper who made a mistake in an exit for Peru to sing the second goal of the game. Carrillo took advantage of the pique of the Racing goalkeeper and handed the ball to Yotún, who sent the ball to the net.

It did not seem to frighten the score to Peru. He endured the onslaught of Chile, as when Vargas sent a header to the post and like when Gallese showed off against Beausejour, to later control the game, this time without the ball. And, when Chile was desperate in attack, Guerrero had his prize. The striker, who had played for everyone, played for him. He received the ball at the door of the area, dribbled Arias and signed the 3-0. Definitely, it was not the night of Chile in Porto Alegre. Not even from the 12 steps could he get it right. Vargas tried to cheat Gallese with a Panenka penalty, an intention that the Peruvian goalkeeper guessed. The classic of America was for Brazil; the Pacific, for Peru. Gareca's team has already surprised Uruguay and Chile, now they will look for the feat against Canarinha in Maracaná.